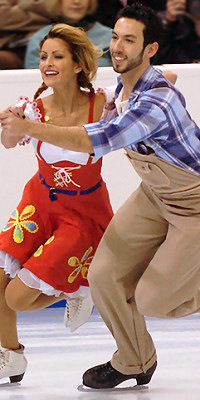 Tanith Belbin and Benjamin Agosto take the lead in ice dancing after placing first in the Compulsory Dance.

Competition continued on Wednesday afternoon in the Xcel Energy Center in Saint Paul, Minn., as the Championship dancers took to the ice to open the day’s events at the 2008 U.S. Figure Skating Championships. The Compulsory Dance (CD) selected for this competition was the Yankee Polka, a dance choreographed by U.S. Figure Skating Hall of Fame Member Ron Ludington in partnership with James Sladky and Judy Schwomeyer.

The Yankee Polka, long thought of as one of the most demanding compulsories, combines difficult sweeping moves of the legs and intricate edge work – all at the speed of 120 beats per minute. Should the couples hesitate for a split second, the dance will have passed them, and they might never get back on beat. As such, this is considered one of the riskiest of compulsories.

Leading the way after the CD as expected, are reigning World bronze medalists Tanith Belbin and Benjamin Agosto (Arctic FSC). The team performed this dance with world-class speed, as well as attention to the character of the rhythm reminiscent of a barn dance in middle America.

“That was probably our most consistent run-through that we have done of this dance,” gushed Belbin. “This is a challenge for us because it is not easy to keep those long limbs with the pace that you need to keep.”

The four-time and defending champions are not known for their compulsory dances, but that might soon change. They skated this program with a technical mastery that could put them in contention for the gold medal at the World Championships right from the start.

“It’s definitely not the most sophisticated dance that we could do,” Agosto added. “Hopefully it is something that shows the difference between the level of skaters and separates their different technical abilities.

“This year is not as much of a shock in coming to the bigger stadium,” confessed Davis. “We really feel like senior level skaters now.”

In performing this compulsory for the first time in competition, Davis (21) and White (20) proved that last year’s results weren’t a fluke, and that they are here to compete. The current bronze medalists, who showcased improved speed and technical mastery, outscored the leaders on the technical mark (21.12 points), but were unable to overtake their more experienced teammates with a total score of 40.59 points.

“We have been training very hard to come to Nationals and expected to do well,” said a confident White. “It’s nice to get rewarded when you work that hard.”

“This program was an excellent start for us,” said a happy Bommentre. “Our goal coming in to this was to get used to the ice and build upon the performances for the free dance.”

Navarro (26) and Bommentre (23), the obvious crowd favorites, skated in the first warm-up group and set the standard high for all those who followed. With their typical flair and improving speed and flow, the 2007 pewter medalists scored 35.38 points in this phase of the competition.

“This is the first time that we have had a repeat of a (compulsory) dance at Nationals,” admitted Navarro. “It was fun to do it again, because it feels like we have improved a lot this second time around.”

Finishing in fourth place in their first senior competition, was Emily Samuelson (Ann Arbor FSC) and Evan Bates (Ann Arbor FSC). After winning the silver medal at the Junior Grand Prix Final, Samuelson (17) and Bates (18) started training this compulsory dance for the first time in their careers.

“It was a new dance for us,” Samuelson said with a grin. “We never actually competed it before, but it was a lot of fun to perform for the crowd.”

The reigning Junior champion earned a whopping 34.00 points for their efforts, and kept themselves in the hunt for a spot on the team heading into the World Championships in March. However, they are more focused on making a different team.

“Junior Worlds is definitely our biggest competition of the year,” Bates declared. “So hopefully we’ll get named to the team so that we can go there and bring home the gold medal.”

Jennifer Wester (Dallas FSC) and Daniil Barantsev (Detroit FSC) finished in fifth place with 30.46 points, after a disappointing performance. The 2008 Midwestern Sectional champions, who were finally released to skate internationally, made a mistake in their first pattern of the dance that could have cost them a placement or two.

“It felt like I caught an edge, but that is no excuse,” Barantsev, 25, explained.

“We have never made this mistake before,” added 22-year-old Wester. “We train to put everything out there, and we plan to go for everything with 100% tomorrow, and hope it will be where we want it to be.”