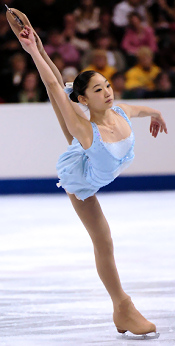 Mirai Nagasu, 14, is the first lady since Peggy Fleming to win the national championship in her first try.

It was a phenomenal competition that included four of the most prolific ladies’ free skating programs in U.S. history. The top four ladies, all podium neophytes, each landed a triple-triple combination en route to knocking three of last year’s medalists off of the podium; while the fourth, Emily Hughes didn’t even compete due to injury.

As the results were posted, the International Selection Committee met behind closed doors to name the ladies who would be named to compete at the three upcoming ISU Championships. Normally naming the team is an easy process, as the committee selects the top finishers to represent the U.S. based on how many slots are available. The national champion is guaranteed a spot on the World Championships team, but this year, Nagasu does not meet ISU minimum age requirements to allow for her selection. Neither does Flatt or Zhang.

So, the committee had an interesting decision to make. Who should be named to the team? The fifth place finisher Beatrisa Liang seemed like a logical choice. Moving right along down the standings in sixth was Katrina Hacker (The Skating Club of Boston). Defending champion Kimmie Meissner (University of Delaware FSC) ended up in seventh. Most thought that the team would be comprised of Ashley Wagner, Beatrisa Liang, and Katrina Hacker. When it was announced, Wagner and Liang topped the list, but Hacker was listed as the first alternate. The committee determined it would be more advantageous for them to name former World Champion Meissner to the team instead. Nagasu, Flatt, and Zhang were named to the Junior Worlds Team, and joining Wagner and Liang on the Four Continents Championship Team? Katrina Hacker.

“We selected the teams based on what we thought would be the most competitive teams that we can put out there,” explained U.S. Figure Skating President Ron Hershberger. “We want to give as many girls as much of an opportunity to compete as we can, and we believe that based on (Meissner’s) previous results, that she deserves a spot on the team.”

Hershberger further explained, “Meissner is a very hard worker, and we have no doubt that she will work hard to prepare herself well for a successful World Championships.”

Beyond the controversy, the competition was a site to behold; perhaps a preview into what is in store for championships to come.

Of the contenders, Liang (All Year FSC) was the first to skate followed by Zhang. So competitive is the current group of U.S. ladies, Liang and Zhang were both relegated to skating in the penultimate group, and it seemed to work in both ladies’ favor.

The “grande dame” of the lot, 19-year-old Liang, who made her 8th consecutive appearance in this competition, opened her Yellow River Piano Concerto program with pizzazz. Bebe, as she is called, started with a triple-Lutz-double toe loop combination, and then immediately landed a gorgeous triple flip.

It seemed as if Liang was going to have one of those great performances, but after she completed a level 4 flying combination spin, she popped her attempt at a triple loop. Last year’s pewter medalist was up and down after that, landing two more triples and a double Axel combination, but also popping her second flip into a single.

“I really enjoyed myself, said Liang, “and I felt really different than I did during the short program. I was telling myself that this was just a practice so that I could relax. It was so great to skate here with the audience being so supportive. It definitely pumps you up when people are rooting for you.”

Liang moved up one place after the short program, and finished with a total of 164.87 points in the competition.

Skating last in the penultimate group, Zhang opened with a beauty of a triple-flip-triple toe combination for which she earned a GOE of +1.00 for a total of 10.50 points for just that one element.

Skating in a pale blue dress to an instrumental version of Ave Maria, Zhang put on a master class in ballet on the ice as she stretched and twisted herself into impossibly breathtaking positions. The current Junior World champion used clean lines, pointed toes, and a fantastically arched back to draw ‘oohs’ and ‘ahhs’ from the audience throughout her program.

“I was glad to do the triple-triple,” said the fast-talking 14-year-old. “After that, I was just really excited, and I wanted to do the best that I could.”

In addition to hitting such amazing positions, the beauty of Zhang’s skating also lies in her ability to perform high-level technical elements. Zhang was credited with four clean triple jumps and two Lutzes on which she was given a deduction for taking off on the incorrect edge (flutz) – an ongoing problem for the pewter medalist.

Zhang pulled up from seventh place after the short program, scoring a competition total of 173.16 points.

The order of skate for the final group was as follows: Hacker, Meissner, Flatt, Wagner, and finally, Nagasu. At this point, Zhang was in first place, followed by Liang, then Melissa Bulanhagui, who had a wonderful skate, and finished in eighth place overall.

Skating to Concierto de Aranjuez, Hacker opened with a triple toe-double toe-double loop combination that she performed with ease. The 17-year-old then attempted a triple (f)lutz combination, but was only able to get a single toe loop rotated on the back half. Hacker only managed three clean triple jumps, but earned level 4 on all of her spins to finish with a total of 158.28 points in the competition.

“I never thought that I would be skating in the last group at Nationals,” Hacker admitted. “I worked really hard today to get through it, but I guess that I wish that I had a better program. I felt a lot of pressure today, but once I got out there, I tried to focus just on what I needed to do.”

Next up was Meissner, who was in fourth place after a disappointing short program. Skating in a pale pink dress covered in complimenting colors of jewels, the defending champion planned the most difficult program of the evening including two triple-triple combinations.

Meissner opened with a fall on her first two elements; a triple flip followed by a triple Lutz. After landing a clean double Axel-double toe combination, the current Four Continents champion fell again on another triple Lutz attempt.

“That’s a bummer. That’s all I can say,” said the dejected Meissner. “It’s such a shame. I was really skating well, and I was very confident. But I just lost it.”

In all, Meissner was only able to land two triple jumps in her Nessun Dorma program, but used high levels on her spins to keep her from falling further down the standings. The 18-year-old’s placement was her worst showing at the U.S. Championships, with her total score of 149.22 over 30 points less than last year’s title-winning score.

Flatt skated next, and opened with an easy triple Salchow to get her jumping legs underneath her in preparation for her triple Lutz-triple toe combination that came next. The Cheyenne Mountain High School honor student skated to Romantic Rhapsody by Andre Mathieu, and showed a maturity in her musical interpretation well beyond her fifteen years.

“Going into the long, I felt like I had nothing to lose and everything to gain,” explained Flatt. “I really attacked everything and had a lot of fun.”

The bubbly Flatt attempted and landed seven easy triple jumps, and won the freeskate, but could not overcome Nagasu’s lead after the short program.

The silver medalist was excited about being named to the Junior Worlds Team and hopes to improve her skating to be even more competitive as the Olympic year approaches.

“I am hoping to get all of the international experience that I can get to prepare me for competing with all of the great skaters out there,” said Flatt. “Especially the Japanese women, since they are so competitive now. As we approach the 2010 games, it is going to get more and more competitive, and I want to be a part of that.”

Wagner took to the ice slowly, appearing to calm her nerves and focus her energy on her performance. The “military brat” opened her claim to the national title with a triple Lutz-triple loop combination that was the highest scoring element of the entire competition.

“It was so loud out there that I could barely hear myself think,” Wagner said with a smile. “I was really nervous because I heard the crowd cheering for Rachael, so I knew that she had done well.”

Skating to the Latin-flavored Jalousie, Wagner landed seven clean triple jumps, and earned level 4s on all but her straightline step sequence to clinch the bronze medal in her first try. The 16-year-old’s only mistake was underrotating a double loop on the back half of a triple loop-double loop combination; a mistake that cost her the silver medal. However, the high school junior was ecstatic to be named to the World Championships Team.

“I was sitting in the “Kiss and Cry” thinking, ‘Oh my God, I could be going to Worlds,'” Wagner said. “I’m just so excited for it.”

As the last skater and leader after the short program, Nagasu had the whole world watching to see if she could hold up to the pressure of the moment. The high school freshman had a five point lead heading into the freeskate, but knew that she had to skate her best to have a chance at the title.

Nagasu opened with a calming spiral sequence, developing the character of a doll using music from the ballet Coppelia as the backdrop for her charge for the national championship. But then the jumping passes came; first a double Axel. A fall. Then her attempt at a triple Lutz-triple toe in which the toe was called as underrotated. A hush fell upon the audience. This performance would test a young skater’s mettle, and how would she respond?

“I was really nervous going into the program,” admitted the 14-year-old. “I heard the crowd, and I knew that everyone was skating well. When I fell on the double Axel, I was like ‘What am I doing? I have to get myself back under control!'”

From there, Nagasu pulled it together, and fought like a champion through every element. In all, last year’s Junior champion landed five triple jumps. Though she only placed third in the freeskate, her lead after the short program helped her to win her second national championship in as many years.

“My coach had to tell me that I won because I didn’t have my glasses on,” giggled the tiny champion. “And then I was like ‘Oh my God! What?'”

But Nagasu was not disappointed in not being able to compete at the World Championships.

“I’m really happy for Ashley because she gets to go to Worlds,” Nagasu said later. “I’m not disappointed in not getting to go to Worlds, because I definitely don’t think that I am ready to go to anything that high yet. I just want to get more experience and be more ready for when I do get to go.”