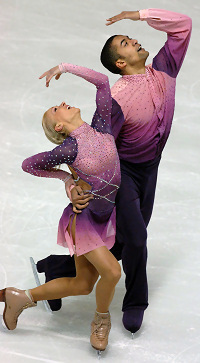 In the Pairs event, defending champions Aljona Savchenko and Robin Szolkowy justified the foregone conclusion that they would repeat their victory. The German champions delivered a nearly flawless routine to L’Oiseau by Rene Dupere.

The defending champions opened with a huge throw triple flip, but then Szolkowy had a slightly shaky landing on his jump in the side-by-side tripe toe-triple toe sequence. Later, however, he popped a triple Salchow to a single – making it the fifth time this season that the team has failed to complete the element.

Otherwise, the students of Ingo Steuer were mesmerizing. None of their rivals came close to their level of complexity and originality in element entries and exits, or the flow – which they seem to achieve almost effortlessly. The 2007-07 Grand Prix Final champions earned 132.03 (67.57/64.46) points for the long program, and new total personal best of 202.39 points.

“The performance today was quite good,” said Szolkowy, at a post event press conference. “Not perfect, but good.”

“At the moment we are just enjoying ourselves,” added his partner, Savchenko. “We obviously have a lot of work to do, but right now we just want to enjoy the moment. It’s our second gold medal at the European Championships. The first one was a bit more of a surprise. It was somewhat sweeter because of it, but this one is also very precious for us.”

When asked about his problems with triple salchow, Szolkowy replied: “The Worlds in Sweden is going to be my last chance to show you my triple Salchow, and I promise you I’ll land it!”

Maria Mukhortova and Maxim Trankov opened their program with strong side-by-side triple toe-double toes, a triple twist, and side-by-side triple Salchows. It was the first time this year that they have completed both their jumping passes, but the 2007 Finlandia champions missed their usually consistent throws. Mukhortova popped the first throw triple loop into a single, and later fell on throw triple Salchow.

“I don’t know what happened on the throws,” Trankov later told the press. “Normally they are very good elements for us, and Maria never falls on them. Perhaps we were too nervous, too concentrated on the jumps, and simply were too relaxed for the throws.”

The 2008 Russian silver medalist’s non-jumping elements, however, were solid, with only the straightline footwork and side-by-side flying combination spin receiving a level 1. Their other elements were awarded levels 3 and 4. On occasion, however, their routine to Rachmaninov’s Prelude appeared to be too heavy and oppressive for the skaters to express. Be that as it may, their power and flow were up to the musical level, and they placed second in the long with 106.68 (53.32/54/36) and overall (169.41 points).

“We are not happy with the way we skated,” said Trankov, “but we are happy to win the medal here. We re-claimed the status of the best Russian pair. It’s very important for us.”

When asked if they had some ideas on how they could defeat the German team in the future, Trankov replied: “We know what to do. We have to skate clean. More often than once a season, so the judges will recognize that [we] are the good team and give us good marks. We have to skate clean with strong choreography and solid elements. I don’t think it’s impossible to do.”

Skating before their main rivals, teammates Yuko Kawaguchi and Alexander Smirnov delivered what might have been their best performance of Love Story to date. Although it wasn’t the strongest technically, the overall impression of their program finally started to approach the soft and lyrical style required by the music.

The 2008 Russian champions got rid of their questionable costumes, which seemed excessive and distracting, and cleaned up their lines well enough not to distract from the overall impression. The mistake on their trump element – the throw quad Salchow – also wasn’t as disruptive as usual, since Kawaguchi only slightly touched the ice with her hand. The team did, however, miss both their jumping passes.

Smirnov stepped out of his first jump and fell on the second of what should have been a side-by-side triple toe-triple toe sequence, and later singled a planned double Axel. Combined with the tight landing of throw triple loop, and the rather slow and hesitant carry lift, it was enough to negate their advantage in the program starting values arising from a quad throw and difficult non-jumping elements, which were all graded level 3 and 4. They finished third in in the long with 106.00 (53.63/53.36), and overall with 167.25 points.

Immediately after the performance, Smirnov expressed doubts that they skated good enough to medal: “I am very upset,” he said, “because I didn’t do my job tonight. Not even 50 percent”.

“For us, our first European championship ended up with bronze medal,” added a subdued Kawaguchi. “But both in the short and in the long programs, we made mistakes. We have to improve for the next competition.”

When asked about the German team advantage, Kawaguchi added: “I don’t know what we have to do to beat the Germans, but I suppose our coach does. We have to listen to our coach and do what we are told to do.”

When asked about the throw quad, Kawaguchi said that it’s the first time she has landed it in competition, and that it meant a lot for her that it happened at this event.

Ukrainians Tatiana Volosozhar and Stanislav Morozov slipped to fourth place (163.43 points) after serious problems with several elements in their long program to music from the Tears of Sun soundtrack. Morozov underrotated his second triple toe in the opening side-by-side triple toe-triple toe sequence, and later popped a planned triple Salchow. The team also aborted their third lift and subsequently lost far too many points in basic value to make up for it with the excellent execution of triple twist, good lifts and throws. They scored 102.14 (49.02/54.12) points for a fourth place finish in the long.

Arina Ushakova and Sergei Karev of Russia remained in fifth (130.34 points) despite finishing sixth in the long program after Ushakova popped a double Axel. The team also took a hard fall on the third lift. Fortunately, no one was hurt, and they were able to complete their routine without interruption. They program and the quality of their skating was a notch above the team who finished below them. While their throw jumps and triple twist were very solid, their mistakes were too costly, and they earned 80.91 (40.46/36.61) points for their long program.

“I don’t know what happened,” said Karev. “This never happened to us before. We did quite well except for the fall. It was our first time at Europeans. It was an experience for us to compete in such a big event.”

Great Britain’s Stacey Kemp and David King pulled up to sixth place overall (129.13 points) after finishing fifth (83.08 points) in the long program. The students of Mariusz and Dorota Siudek didn’t attempt side-by-side triple jumps, and Kemp fell on throw triple salchow. She also had to fight for the landing of a throw triple loop, but overall, their routine to music from the James Bond soundtrack made a rather nice and neat impression.

Mari Vartmann and Florian Just of Germany slipped to seventh place (119.86 points) after they failed to execute either side-by-side jumps or clean triple throw jumps. The team had earlier considered withdrawing from the event as Just is suffering from a painful back injury.

The 2007 Coupe de Nice and Finlandia Trophy bronze medalists later told the press they were simply happy to complete the competition.

The event continues with the Original Dance and the Men’s Long Program.