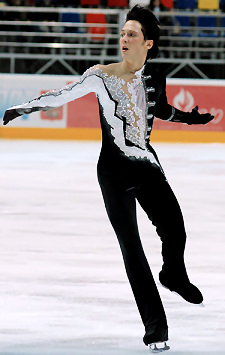 USA's Johnny Weir (23) performs his Short Program to Yunona and Avos by Alexei Rybnikov at the 2007 Cup of Russia.

After a disappointing run at the 2007 U.S. Figure Skating Championships last January in Spokane, Wash., three-time U.S. Champion Johnny Weir decided that it was time to start fresh. So, in the off season, the reigning national bronze medalist made some dramatic changes to his life.

“I have changed my coach, my choreographer, my home, my home state� I changed everything that I could about my life,” Weir explained with conviction. I want all of those changes to be a good thing, and so far I can say that I really am happy with how this has helped my skating.”

Weir started with a new support team that will put him on the ice next week at the 2008 U.S. Figure Skating Championships in Saint Paul, Minn. After an amicable parting from his longtime coach and mentor Priscilla Hill, Weir sought the guidance of Galina Zmievskaya, the coach of 1992 Olympic Champion Viktor Petrenko. Zmievskaya has changed everything about the way Weir approaches skating, offering a fresh perspective to what Weir admitted was “uninspired” skating last season.

“Last year’s nationals was very rough for me,” lamented Weir. “I honestly can say now that I didn’t deserve to take a spot from another competitor. I was uninspired and not prepared, and I didn’t really want to compete. But it was something that I had to do if I really wanted to have continued success in the sport.”

Weir credits Zmievskaya for helping him to move past that period in his career, and believes that he is on the right track for success.

“Galina keeps me on such a [tight] schedule that there isn’t much time to do anything but eat, sleep, clean, and go skating,” Weir explained rather excitedly. She has helped me to rekindle the fire and has given me the will to win.”

In addition to a coaching change, Weir also moved from his parent’s home in Newark, Del., into his own apartment outside of Manhattan in New Jersey.

“The first week that I lived alone, I slept with a kitchen knife next to my bed,” revealed Weir. “I was very nervous to be alone in a strange city and so far away from my family� I was a little bit homesick when I moved up here.”

But things eventually got better for the ever-philosophical Weir.

“I knew I needed to change my coaches and my training regime,” admitted Weir. “I knew that it was necessary for me to be a champion and fight for the next Olympic gold medal. Living on my own away from my family has taught me discipline, and it taught me that I had to do everything for myself. ”

Since his fourth place finish at the ISU Grand Prix Final last month, Team Weir has restructured his training so that he will peak at next week’s competition.

“Since the Grand Prix Final, we had been coasting on the level that I set for myself for that competition,” explained Weir. “I didn’t want to train, train, train, at higher and higher levels and then peak at Christmas. So I had to come down a bit before I started working towards peaking again.”

Weir was delighted to announce the addition of a quadruple toe loop to his freeskate that has been absent up to this point this season.

“This should make some people happy,” Weir said, giggling. “But I am planning on doing [the quad]. I have landed it more than I have fell on it in my program run-throughs, and I’m excited to add that.”

But Weir will not rest on his laurels should he land the quadruple toe loop in Saint Paul. “I am training the quad in my program on a daily basis,” said the Pennsylvania native. “And also we are training the quad Sal(chow), as well as working on making the triple Lutz and triple flip bigger, so that maybe next season we can start working on quads for those jumps.”

The 23-year-old hopes to draw on his previous experiences from the national championships, both the good and the bad, to lead him to another title.

“I already felt going into last year’s competition that there was no way that I was going to win,” confessed the former U.S. Champion. “And having won the three previous years made that even more difficult. Now I’m very confident and I think I’m better trained than I have been in any other year going into the national championships. I hope that comes through. I’m at a clean slate. Last year, I was third, and this year I am going for my fourth title. I am focusing on showing the audience, the judges, and everyone in the skating community how hard I’ve worked to never let a third place at a national championships happen ever again.”

Weir’s biggest stumbling block to his fourth title will be current U.S. Champion Evan Lysacek, with whom Weir has developed the most intriguing rivalry in U.S. men’s skating in recent years.

“I think that there is a rivalry just because we both compete for the United States and we both are competing for the same title,” said Weir. I think that it is exciting for figure skating, especially U.S. Men’s figure skating, but that is where I see the rivalry ending. It doesn’t matter to me what he does in his life or on the ice. [Lysacek] is just another person out there.”

Competition begins on Sunday in Saint Paul, Minn. with the novice short programs, and culminates on the following Sunday with the men’s freeskate. Check back throughout the week for reports from the event on goldenskate.com