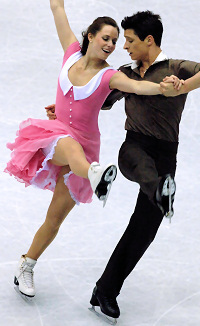 Canada's Tessa Virtue, 18, and Scott Moir, 20, perform their Free Dance to The Umbrellas of Cherbourg.

Canada’s Tessa Virtue and Scott Moir maintained first place throughout the event to win their third consecutive Four Continents medal. However, this time it was a gold compared to the bronze they took in 2006 and 2007.

Meryl Davis and Charlie White of the U.S. won the silver in their second appearance at this event, while teammates Kimberly Navarro and Brent Bommentre took the bronze. USA’s third team, Jennifer Wester and Daniil Barantsev, who are competing in their first major international event, finished fourth.

Twelve of the thirteen couples earned a new personal best in their Free Dance, including the top 10.

Virtue (18) and Moir (20) delivered a captivating, yet technically difficult performance to The Umbrellas of Cherbourg. Their routine featured superb diagonal and circular footwork which highlighted the expressive interaction between the two skaters. The two-time Four Continents bronze medalists received positive GOEs all elements, and also earned a level four on all elements except for a serpentine lift (level 3).

“Today’s performance was very exciting for us,” said Moir. “The Korean fans were amazing and really into the performance, which was rewarding for us.”

The team was aware that they had achieved the highest score of any couple this season. “We’ve heard it about twelve times since we’re off the ice,” said Moir. “We do know, but I still don’t think you can compare competitions. For us, it was our season’s best three skates that we’ve had. We really wanted to come and show the emotional connection and I hope that made it to the judges and that’s where the points are coming from, but other than I don’t think it really means that much.”

When asked about training together with Davis and White, Virtue replied: ” Just being on the ice together with Meryl and Charlie is very motivating and encouraging for us. They’re such a talented team and they work so hard, so we really feed off the energy, and we enjoy it. It’s so much fun competing together, I love it.”

Davis and White had similar feelings.

“They match so well, and all the things they do and the expression are so perfect,” said White, in regards to training with Virtue and Moir. “We can learn a lot from watching them. It’s great to have such great friends and such good competitors. I think we really help each other in this aspect.”

Davis (21) and White (20) also delivered a very strong dance, earning a level four and positive GOEs for all eight of their elements. The team displayed wonderful expression in their routine to Eleanor Rigby and Eleanor’s Dream by The Beatles, and impressed with very fast and perfectly synchronized twizzles. Like the leaders, the U.S. silver medalists also had very good transitions throughout their dance, and placed second in the FD with 100.16 (53.99/46.17) points and overall with 199.45 points.

“We try really hard to make sure we’re in synch with one another before we go out there,” said Davis, when asked about their well-synchronized twizzles. “I think we’re trained well enough at this point that it just sort of happened.”

The team plans to train hard for the upcoming World Figure Skating Championships. “We’re going to make a couple of tweaks here and there to make ourselves comfortable with everything,” Davis added.

Teammates Navarro (26) and Bommentre (23) performed a provocative, yet technically difficult dance, in which all elements received positive GOEs. The U.S. bronze medalists produced a very good level 4 midline (non-touching) step sequence in their routine to Since I’ve Been Loving You by Corinne Bailey Rae, and impressed with a final rotational lift that had unusual variations of position. The finished third in the FD with 89.62 (48.47/41.15) points and overall with 180.65 points.

“It was a great skate,” said Bommentre. “I think that was the best performance we’ve had this season.  I think we’re both really, really happy with it. In terms of Worlds and this being a tune-up for Worlds, I feel like that was the performance we’ve been working for. We’ve just got to fine-tune that and we’re going to be in a great position for Sweden.”

“We’ve made a lot of changes even since Nationals, so we had to think about all of that,” added Navarro. “On top of that, we wanted to bring up the level of performance of this program because it feels like it’s been the hardest one to achieve.”

Kaitlyn Weaver (18) and Andrew Poje (20) of Canada placed fourth in the FD with 88.47 (49.33/39.14) points with their sultry routine to Blues for Klook by Eddy Louis. However, with a total score of 174.36, the team remained in fifth place overall, just .01 point behind Wester and Barantsev. The current World Junior bronze medalists, who have been skating together for less than 18 months, earned a level 4 on all elements except for a midline (non-touching) step sequence (level 3). They also received positive GOEs on all eight of their elements and showed very strong expression in their dance.

Wester (22) and Barantsev (25) earned 87.98 (48.23/39.75) points for a fifth place finish with their upbeat and joyful routine to Singin’ in the Rain by Irving Berlin. The 2007 Nebelhorn Trophy champions produced two level 4 lifts, as well as very strong level 3 circular and diagonal footwork, placing fourth overall with 174.27 points.

Allie Hann-McCurdy (20) and Michael Coreno (23) of Canada placed sixth overall (164.02 points) after placing sixth in the FD with 83.76 (47.82/35.94) points. The Canadian bronze medalists were solid except for a minor error on the dance spin. Their routine to Rhapsody in Blue by Georges Gershwin featured four very good level 4 lifts, as well as very good level 3 circular and midline (non-touching) step sequences.

“We learned no matter how tired we are, how jet lagged we are, we can go out and skate,” said Hann-McCurdy, when asked what they learned at their first Four Continents. “We’ve been training hard at home and that’s what showed up this week. We had three personal bests here.”

“We haven’t changed any steps, but we’ve worked on intensity and the patterns kind of exploded,” she added, regarding their progress since Canadian Nationals. “Our goal coming in was to get new personal bests, we did that, so we’re happy. At Worlds, we hope to get three more personal bests and to improve our dance spin.”

Japan’s Cathy Reed and Chris Reed finished seventh overall (158.37 points). The brother-and-sister team earned positive GOEs for all elements except for their level 4 twizzles. They also showed good edge work in both their step sequences in their routine, which was choreographed by Nikolai Morozov, placing seventh in the FD with 81.77 (46.56/35.21) points.

“It was a very good competition for us,” said Cathy Reed. “It’s definitely boosted our confidence.We got personal bests in every dance, the compulsory, original and free. So we’re very happy with the way we’ve skated throughout the entire competition. We’ve been through a lot this season. We started very low. Chris had two surgeries on his knee. We’re going to our first Worlds and we’re so excited.”

Chris Reed had surgery on his knee in April and August due a torn meniscus and ligament. ” It was really a tough season, but we’re managing to pull it off at each event. We’re gaining experience with each competition. Our nerves are getting lower and lower.”