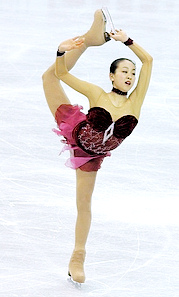 Yu-Na Kim of South Korea, who was fifth after the short, won the long program with a nearly flawless performance to Miss Saigon, but had to settle for another bronze medal.

The 17-year-old landed five high quality triples, including an opening triple flip-triple toeloop combination, but popped her second triple Lutz attempt into a single. All her non-jumping elements received levels 3 and 4 and the 2008 Grand Prix Final champion simply floated through her program, but she was simply too far behind the leaders after the short program. She earned 123.38 (64.82/58.56) points for a total score of 183.23.

“I had an injury,” explained the skater at the post-event press conference. “But fortunately I got bronze – a good result in the end. I have to be more careful in the future not to get any more injuries. Considering my bad condition, I think the bronze is not a bad result. In the beginning of the season, I didn’t pay enough attention to my health and I ended up with an injury in the end. I should learn how to rest and not to train all the time, and if I feel any pain, I should take care of it immediately.”

“After the results (of the short program) I felt like giving up,” Kim confessed. “But I just wanted to do a performance like in training. It lessened the pressure, and helped me to achieve good results. I happened to be skating injured at both World Championships, so I’ve learned how to deal with pressure and with bad conditions.”

When asked to describe in three words how she felt after the end of the program, Kim picked her words carefully: “It’s over, I’m so tired, I could do better.”

Despite slipping on the opening triple Axel entry and placing second in the long program, Japan’s Mao Asada won her first World title and second World medal in as many appearances at this event.

In contrast to her struggles last season, the 2008 Four Continents champion didn’t let the mistake in the first seconds of the program affect the rest of her performance. While the 17-year-old appeared disoriented right after the fall, she quickly recovered and went on to land an effortless triple flip-triple toeloop combination. The success of that difficult element allowed her to put the fall behind her, and she nailed most of her other elements, performing all her jumping passes with incredible ease.

Asada landed a total of five clean triple jumps, but she once again received a deduction for the wrong take-off edge of her triple Lutz attempt, and the triple loop (in combination with a triple flip) was downgraded. The Japanese champion also received only a level 1 for her spiral sequence, but earned levels 3 and 4 on her spins. She earned 121.46 (61.89/60.57) points for her intricate and enchanting routine to Chopin’s Fantaisie Impromptu, for a total score of 185.56.

“I didn’t think of anything (then I slipped),” Asada replied when she was asked about what went through her head at the moment of the fall. “I knew I had a triple flip-triple toe combination next and I just wanted to do like I did in the practice and that’s what I did.”

When asked to compare her two Worlds experiences, Asada replied: “Last year I made a big mistake in short, and that’s how I’ve learned how important it is. Today I missed a triple Axel, but I’ve learned that I can still make up for the missed element if the other elements are good. Never give up. That what I’ve learned.”

Asada also admits that she hasn’t yet thought about her future. “I promised myself that I would think about the coach I need for next season, so I’ll think about it later.”

Italy’s Carolina Kostner, who stood in first coming into long program, slipped to second place overall (184.68 points) after finishing third in the free program. Only two of seven jumping passes in her Dumsky Trio routine didn’t receive a negative grade of execution. Fortunately for the two-time and current European champion, those two passes included a strong triple flip-triple toeloop-double loop combination, and none of her seven triples were downgraded.

Even though the landings of the most of those jumps were flawed in some way, Kostner managed to avoid falls and the deductions that come with them, and she ended up loosing only 2.40 points due to her struggles. The Italian also received high levels for her spins and she kept attacking her program throughout, earning a new personal best of (61.88/58.52) points.

“Going into the program I felt responsibility like I’ve never felt before,” said the 21-year-old at the post-event press conference. “I think I had a great skate. Landings could have been better, but overall I had a lot of fun, and that’s the most important, right?”

“I am very happy about silver as I only ever won either gold or bronze before (in any competitions),” joked Kostner. “It’s a step forward from the bronze in Moscow. I won it in the name of the team who worked very hard with me all this time, who supported me when I didn’t feel strong. I would like to thank all those people who helped train in those last nine months.”

Yukari Nakano, who was third going into the long program, slipped to fourth place overall (177.40 points) after her triple Axel and triple flip attempts were downgraded. The 2008 Japanese bronze medalist landed five clean triples and captivated the audience with her effortless spins and smooth and soft skating, earning a new personal best of 116.30 (56.98/59.32) points. Skating last and avoiding any obvious mistakes, Nakano was an instant crowd favorite and the audience booed loudly when her marks were announced.

“I don’t care about the placement,” the 22-year-old told the press. “I’m just very pleased that I was able to do everything I wanted to do tonight.”

Canada’s Joannie Rochette placed fifth in the long with 114. 59 (60.52/54.07) points, and subsequently moved up to fifth overall with 174.12 points – thus achieving her goal for the competition. The 22-year-old put her hand down on a triple Lutz (in combination with a double toeloop), but recovered to land a clean triple flip. Later, however, she popped a loop and stepped out of her second jump in a double Axel-double Axel sequence.

The 2008 Four Continents silver medalist was otherwise strong, nailing a triple toeloop-triple Salchow sequence in the second half of the program, and gaining high levels on her non-jumping elements while delivering her intricate transitions with confidence.

“The first half of the program was a little cautious,” admitted the 2008 Canadian champion after her performance. “The loop – I felt this jump very good this year. I think I rushed it… I was overexcited to do it, but i though if I calm down it’s still possible to make the top five.”

Sarah Meier from Switzerland also moved up one place to finish 6th overall (171.88 points). The two-time and current European silver medalist skated a nice and lyrical program to music by Tokuhide Niimi, however, she only landed four clean triple jumps. The 23-year-old received a deduction for use of the wrong take-off edge on her triple flip, and singled her last jump in an intended triple Lutz-double toeloop- double loop combination, but the audience responded warmly to her strong spins and soft skating style.

“I’m satisfied with my program today,” said the Swiss champion. “Not everything was perfect, but I had a very good feeling throughout the program and so much energy. I’m very happy to finish the season like this as I have improved from competition to competition.”

Finland’s Laura Lepistö sky-rocketed through the ranks after she skated a clean long program which featured four clean triple jumps. The 2008 European bronze medalist barely made the cut for the long, after finishing 21st in the short program. She finished seventh (101.85 points) in the long, despite skating long before the leaders, and placed eighth overall with 147.26 points. The 19-year-old’s only mistake was popping a planned triple Lutz into a double.

“Not everything was perfect,” noted the Finnish champion, “but I am happy. I tried to leave it (the short program) behind and concentrate on the free program today, but it was hard. It was my first trip to Worlds, and I hope that next time it will easier.”

In contrast, teammate Kiira Korpi fell from fourth to ninth place overall (145.73 points) after finishing 17th in the long. The 19-year-old only produced one clean triple jump and took a fall during the spiral sequence. Nevertheless, the rest of her non-jumping elements were strong and she displayed good presentation skills.

“I don’t know what happened,” said Korpi. “It felt good before the program. I didn’t feel nervous. I think I tried too much. It was a different situation to skate in the last group. It was bad luck to fall in the spiral. Maybe I was nervous even if it not felt like that.”

At the end of the day, USA’s Kimmie Meissner found herself in the seventh place (149.74 points) in the final standings, despite the fact that she was ninth in the short program and 12th in the long. For the former World champion, the program was a hit-and-miss experience. She stepped out of the first jump and underrotated the second in a planned triple flip-triple toeloop combination, but recovered to land a triple Lutz-double toeloop. The 18-year-old also later fell on two underrotated triple jumps – a Lutz and Salchow.

“I started better than I have done all year so I’m kind of happy with that,” said Meissner, “but it wasn’t perfect I still fell and I can do it better.”

Teammate Beatrisa Liang finished 13th in the long program and 10th overall (145.29 points). The 19-year-old fell on a triple flip as well as an underrotated triple Lutz. She was also penalized for using the wrong take-off edge on both Lutz attempts.

“The whole thing was an amazing experience for me and I really enjoyed myself here,” said Liang. “I guess at competitions like this [I need to] take my time and just enjoy every step of my program.”

Julia Sebestyen of Hungary finished eighth in the long and 11th overall, while Italy’s Valentina Marchei moved up from 17th to 13th place overall after finishing ninth in the long.

Miki Ando of Japan withdrew from the competition after a rocky start of her long program that she proved she wasn’t fit to compete. The defending champion put a hand down on triple Lutz and fell on triple Salchow before skating over to the referee. The media advisory released soon afterward explained that she “suffered from an acute trauma on her left leg which appeared today in practice. She suffers from muscle strain and partial rupture.”