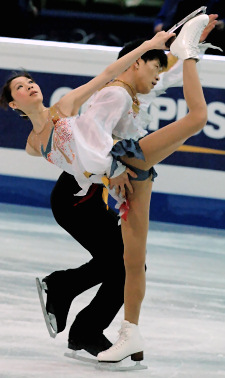 Dan Zhang and Hao Zhang of China set a new record for Pairs Short Program to win this segment of the competition. The 2006 Olympic silver medalists scored 74.36 (43.50/30.86) points, beating the previous record set by Germany’s Aljona Savchenko and Robin Szolkowy during the Grand Prix Final by more than two points.

Zhang and Zhang opened their program with a huge lateral triple twist and impressive throw triple loop. The 2008 Four Continents silver medalists went on to nail the side-by-side triple Salchows – an element they had some problems with during practices, but their non-jumping elements were not on the same level.

They received a level 4 for their pair combination spin and lift, while their flying spin and death spiral were rated a level 3. The choreography of their program was quite good, and while the execution could have been sharper in some places, the team from Harbin attacked their program throughout.

“We beat our personal best,” said Hao Zhang. “The most important thing is still to come – the free skating. The crowd here was just great. We are always hoping too give a good performance for the crowd. It’s the last competition of the season, so we will try to give our best tomorrow. ”

Hao Zhang recently had surgery to remove a furuncle from his left leg. “The surgery was very unpleasant. Overall, it (surgery and recovery) took two weeks and then we came here directly. It still hurts occasionally, but I’m trying to overcome it.”

The favorites to win the event, Savchenko (24) and Szolkowy (28), drew the first starting number. The 2007 European champions opened their program to Asoka with a huge throw triple flip and high lateral triple twist (level 2), but Savchenko later Savchenko stepped out her jump on the side-by-side triple toeloops. Their non-jumping elements were very strong, receiving mostly level 4s from the technical panel (except for a level 3 step sequence), and the choreography and interpretation of their program were among the best in the field. Despite the mistake on the jump, the German champions earned 72.00 (40.75/31.35) points and are currently second.

“That was no problem,” said Szolkowy on skating first. “Nowadays, skating at the beginning doesn’t equal getting low scores anymore. The pressure can only from yourself, but we tried to give our best here.”

Yuko Kawaguchi and Alexander Smirnov of Russia, who were fourth after the short program at last year’s World Championships, have proven that they belong among the ranks of the elite despite a rocky start of the season. The 2008 Russian champions have improved upon all of their elements from earlier competitions, gaining a level 3 on most of their non-jumping elements and approaching the side-by-side jumps and the throw triple loop with confidence.

Though Kawaguchi had to fight for the landing on the throw triple loop, she managed to keep her hands and foot off-ice. It was this confidence that really set them apart from most of the other teams, and they beat their previous personal best by almost 10 points, earning 71.42 (42.28/29.14) points for third place.

“We’ve worked a lot on the choreography,” said Smirnov, “and I think this was one of our best performances, especially considering the choreography part. I’m definitely very pleased.”

Kawaguchi partially agreed. “I’m pleased with the score, but the performance could have been a bit better. The throw was shaky, but I didn’t touch down with my second foot or with my hands. I hung into it. The throw wasn’t the most difficult element for me, the death spiral was.”

At the press conference, the Russian team was told that they appeared more confident. “I’m happy to hear that you found our performance confident,” said Kawaguchi. “Personally, I think we still lack confidence, but if you think otherwise, well, it’s good.”

Jessica Dubé (20) and Bryce Davison (22) of Canada gave a mesmerizing performance to Galicia Flamenco, earning a new personal best of 68.66 (40.52/28.14) points for a close fourth place finish. The 2008 Canadian silver medalists opted to do only a double twist and had some problems during the final pair combination spin, but otherwise were smooth throughout.

“We are very happy,” said Davison. “This is the best short program we did this year.”

The team had a less than par short program at the Canadian National Championships in January, and then took a break from the Four Continents.

“For me it was a bit difficult to put it behind us,” said Dubé, of their performance at Canadian Nationals, “but once I did, training and preparing was much easier.”

China’s Qing Pang and Jian Tong, who were last to skate, failed to give a strong and satisfying finish. Though the 2008 Four Continents champions were smooth and confident, showing off interesting choreography in their routine to O Doux Printemps d’ Autrefois, they took a hit in the technical score when Pang underrotated his jump in the side-by-side triple toeloops. Their other elements were strong, but the current World silver medalists only received a level 2 for their step sequence. Despite the error, the earned a new personal best of 67.87 (37.58/30.29) points for fifth place.

“It was more or less on the level of our practices,” noted Pang.

“We’ve seen that everybody has performed very well and we tried our best as well,” added Tong, “but we made some small errors. Maybe it affected us that we skated last. Hopefully we can do better tomorrow in the free skating and catch up.”

“The previous skaters did quite well,” added Tong, “and maybe 70% got a new seasonal best, and we got a new season best, but we did mistakes. We will try to forget about it and do our best tomorrow.”

Maria Mukhortova and Maxim Trankov of Russia are currently sixth with 64.09 (36.94/27.15) points after both skaters struggled on the landing of their side-by-side triple toe loops. Mukhortova turned out of landing and put her foot down, while Trankov had to work very hard to avoid doing the same. The 2008 European silver medalists were otherwise very strong, and all their non-jumping elements (except for a level 1 twist and step sequence) received a level 4. However, their grades of execution and program components scores were not good enough to catch up with the teams ahead of them.

“We got a new personal best with not such a good skate,” noted Mukhortova. “It makes us a little happy. We were tight at the beginning and relaxed only towards the end of the program.”

“We did the elements quite well,” added Trankov. “For example, the side-by-side spin, I don’t think that we gave away many points there. The only thing was, of course, that we weren’t able to do [the triple toeloops] too well. We did a good triple twist, then I thought we’d do a good toe. Maybe we wanted it too much.

Trankov also admitted to losing time on preparation due to his arm injury. “We couldn’t practice lifts so much. My right warm is swollen and I have troubles bending it. Nobody really knows the reason, maybe it’s a pinched nerve.”

Canada’s Meagan Duhamel and Craig Buntin, who are making their first appearance at this event as a team, are currently seventh with a new personal best of 60.01 points.

Tatiana Volosozhar and Stanislav Morozov of the Ukraine finished in eighth place with 59.53 points after Volosozhar fell on a throw triple loop.

The event continues with the Ladies’ Short Program and the Pairs Long Program.