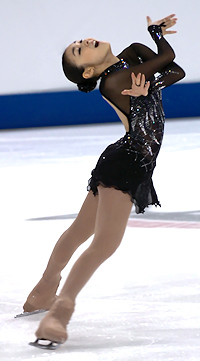 The ladies took to the ice for their short programs tonight, with perhaps the most competitive field in the entire series. Because of the absence of some of the competitors from the World Championships last season, Skate America boasts five of the top 15 ladies in the world standings in this competition. Leading the way is the leader after the short program and reigning Worlds Bronze Medalist, South Korean Yu-Na Kim.

Not only did Kim bring a huge fan base with her to Everett, she also brought a technical arsenal that could not be touched by the rest of the field. Kim’s score of 69.50 points was almost 12 points higher than second place finisher Miki Ando of Japan.

Kim opened her Danse Macabre program with a huge triple flip-triple toe loop combination that would score well even in the men’s event. The 18-year-old followed that up with a nice triple Lutz, but stumbled out of her easiest jump, the double Axel.

“It is the first time performing this program in competition,” said Kim. “I was very focused, but a bit nervous. I made a small error on the double Axel, but everything else was good.”

The Canadian-trained Kim showed speed and intricate choreography that propelled her to the top of leaderboard. On the way, she earned a level four on her spiral sequence and a level three on every other element.

Japan’s Ando is coming off of a disappointing season in which she was forced to withdraw from the World Championships due to injury. After a summer of therapy on her shoulder and a period of wanting to leave the sport, Ando returned refreshed, pain free, and ready to skate well again.

“After Worlds, I was thinking about quitting skating because the injuries were really bothering me,” confessed Ando. “But my coach and family helped me to change my mind, so I went to the hospital a lot this summer for therapy on my shoulder, and now it is feeling good. Because of that, I am happy to be skating again.”

The former World Champion opened with a triple Lutz-triple loop combination in which the second half was downgraded, but was able to complete the rest of her jumps with ease. Ando’s only other miscue was a silly fall on the straightline footwork sequence, but she recovered well to finish strong with her Memoirs of a Geisha program.

“I feel stupid because I made a mistake on the footwork,” Ando admitted. “I was happy with the way I skated tonight otherwise, and I am just happy.”

Ando’s score of 57.80 points gave her a narrow lead over teammate Yukari Nakano, who placed third with 57.46 points.

“I was quite a bit nervous,” admitted the Japanese bronze medalist. “But I was glad that I did not cut the flow of my program, and I was able to finish the program to the end with ease.”

The 22-year-old used her trademark spins and component scores to keep her in the running for the title. Skating to The Gadfly by Shostakovitch, Nakano smiled throughout her program, and got the audience behind her after the mistake.

Right behind Nakano in fourth place is USA’s Mirai Nagasu. The current U.S. Champion opened her Charlie Chaplin program with a mistake on what should have been a triple Lutz-double toe loop combination. Instead, Nagasu was unable to cleanly execute the Lutz, so she was forced to abandon the toe loop. However, Nagasu thought quickly on her blades, and tacked on a double toe loop to the end of her next element – a triple flip – to get the combination points.

“I didn’t land the triple very well,” admitted the World Junior silver medalist, “but I think that I did well in the rest of the program.”

Nagasu earned 56.42 points in the short program, setting her up for a podium finish should she skate well in the freeskate. On her heels, however, is teammate and rival Rachael Flatt, the reigning World Junior Champion.

Flatt skated a sophisticated program to Moon River, and attempted a triple flip-triple loop combination. “I got a little excited on the combination,” she explained. “So I torqued the entry to the loop and so it was downgraded.”

Flatt next landed a nice triple Lutz, and was rewarded with high levels on two of her spins to earn a score of 54.92 points.

“I need to work on my layback,” confessed U.S. silver medalist. “I didn’t get the level that I wanted, but it was still a good start.”

Sitting in sixth place is former World and U.S. Champion Kimmie Meissner, who had a credible showing after a lackluster season last year. The 19-year-old skated with a newfound maturity and a happiness that has been absent from her skating at recent competitions. Meissner’s score of 54.90 keeps her in the running for a medal after tomorrow afternoon’s freeskate.