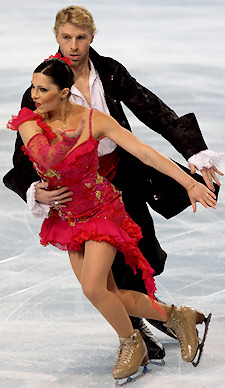 Isabelle Delobel and Olivier Schoenfelder of France led the Ice Dancing field after the Compulsory Dance.

Approximately 58 skaters from 15 different countries are competing for points and global prize monies totaling $180,000 in U.S. dollars. The points will go toward qualification for the Grand Prix Final of Figure Skating in which the top six competitors from each discipline will be invited to compete for a total purse of $272,000 U.S. dollars.

The skaters were seeded and invited for the six GP events according to the results of the 2008 World Figure Skating Championships. Competitors who finished first through sixth place in each discipline are considered seeded and were assigned to two Grand Prix events by drawing, while those who placed seventh through 12th, were invited.

Next priority was given to skaters who had the next highest ranked and/or who achieved a seasonal best score which was equal to or better than those who placed seventh through 12th at the ISU World Championships 2008.

Trophée Eric Bompard kicked off on Nov 14th with the Compulsory Dance.

The Compulsory Dance (CD) of the event was the Paso Doble, which was invented by Daphne B. Wallis and Reginald J. Wilkie, and was first performed in 1938 at the Westminster Ice Rink in London, Great Britain.

Isabelle Delobel and Olivier Schoenfelder of France put a comfortable distance between themselves and the rest of the field following their playful interpretation of the Paso Doble. Their routine was distinguished with both their unusual “pirate” costumes and the use of their free use of hands which added unique flavor to the dance.

“We wanted to do something special to make it more interesting,” explained Schoenfelder. “Our coach Romain Haguenauer suggested a Pirate theme, and we had a lot of pleasure skating it.”

The World Champions appeared to be the only couple to incorporate some fun into the precise requirements of the compulsory dance, and in the end they were the only ones who look like they truly owned it. The team scored 37.98 points.

Italian Champions Federica Faiella and Massimo Scali are currently second with a score of 34.46 points. The students of Anjelika Krylova were passionate and powerful in their interpretation of the Paso Doble. Though their footwork and body lines had the precision the rhythm demands, overall their performance seemed to lack that extra easiness exhibited by the French.

Sinead Kerr and John Kerr of Great Britain placed third with 32.32 points. The brother-and-sister team from Scotland showed deep edges, however, their timing was slightly off in places and consequently they had to rush through some steps to catch up.

France’s Pernelle Carron and Mathieu Jost edged Grand Prix debutants Vanessa Crone and Paul Poirier for fourth place. The team from Lyon received the better element score, and with a total of 31.77 (16.20/15.57) points, is currently 0.02 points ahead of the young Canadian couple, who scored 31.75 (16.06/15.69). Both teams were smooth and confident, but neither had the sparkle the higher ranked teams had.