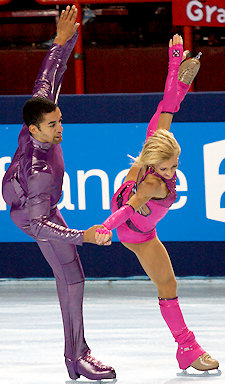 Aljona Savchenko and Robin Szolkowy of Germany placed first in the Pairs Short Program with their Lost in Space routine.

Germany’s Aljona Savchenko and Robin Szolkowy won the Short Program with flawless performance to music from the Lost in Space soundtrack. The team opened their routine with strong side-by-side triple toe loops – the element they made a mistake at during 2008 Skate America.

2008 World Champions produced an equally impressive throw triple flip, but their level two triple twist gained no bonus points as the catch was not clean enough. The team’s energetic program was well received by the crowd and they attacked each element with lot of passion, earning 68.18 points.

Maria Mukhortova and Maxim Trankov of Russia also skated a flawless program, performing a solid level one triple twist, side-by-side triple toe loops, and a throw triple loop. The students of Oleg Vasiliev also earned a level four on all their non-jumping elements. Compared to their performances last season, the team seems to have improved in confidence and power. They skated with the same enchanting quality which is characteristic of their coach’s previous students, Tatiana Totmianina and Maxim Marinin. The Russian silver medalist earned 64.84 points for their routine to Nobody Home by Pink Floyd, and are currently in second.

“We think we skated well,” commented Trankov. “It’s our third competition and we skated our short program well in all competitions. We have worked hard to achieve it and I think we did a good job tonight. We enjoyed skating it here. We love coming to Paris.”

Canada’s Meagan Duhamel and Craig Buntin sit in a solid third with 58.66 points. Unlike the leaders, they only did a double twist, but they earned a level 4 for it as well as positive GOEs. The team also received a level 4 on their spins and spiral sequence and landed a solid throw triple Lutz, however, Buntin was shaky at the landing of his jump in the side-by-side triple toe loops.

“We are fairly happy with the short program,” said Buntin. “We got almost all our levels for the elements. We were a little disappointed with Skate America, and I think really we gelled over the past couple of weeks and came out looking more like a pair tonight. We are definitely more satisfied with our marks than we were two weeks ago.”

The Canadian bronze medalists showed much better unison and feeling of each other in their program to 4 Lamentations than they have exhibited in the past, and the general impression from their program was quite strong.

Huibo Dong and Yiming Wu of China are currently fourth with 51.12 points. They also performed a double twist, but landed their side-by-side triple toe loops and a throw triple loop. The team showed improved flow and basic skating skills which allowed them to carry the theme in their routine to music from Tosca.

The home team of Adeline Canac and Maximin Coia finished fifth after Canac had to fight for the landing of her triple toe loop and later fell on a throw triple loop. Their pair combination spin only received a level one, however, their other elements garnered levels 3 and 4. The French Champions picked up a new personal best of 47.54 points.

Teammates Vanessa James and Yannick Bonheur and Melodie Chataigner and Medhi Bouzzine are currently in seventh and eighth place respectively.

USA’s Tiffany Vise and Derek Trent are currently in sixth place. The team was penalized for underrotation of their side-by-side triple toe loops and a hard fall Vise took on the throw triple loop.