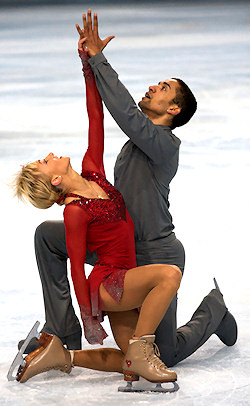 Aljona Savchenko and Robin Szolkowy of Germany placed first in the Pairs Long Program with their routine to music from the Schindler's List soundtrack.

Aljona Savchenko and Robin Szolkowy of Germany won the long program with an inspired, but flawed performance to Schindler’s List. The team opened with a clean sequence of side-by-side triple toe loops, an impressive level two triple twist, and very strong side-by-side triple Salchows, but later missed both throw jumps.

Savchenko double-footed the landing of a throw triple flip and they popped the throw Salchow into single – a repeat from Skate America. The rest of their elements were good and earned high levels and positive GOEs.

The sophisticated long program was a very nice contrast to their upbeat and straight-forward short. The wistful mood of the music was expressed through a series of complex transitions, which the skaters executed seamlessly. The current World Champions scored 120.32 points for first in the long and overall (188.50), but were obviously disappointed with their performance.

“After the program, a couple of people came to us and told us that it wasn’t so bad as we felt it was,” said Szolkowy. “Indeed, it wasn’t so bad – otherwise we wouldn’t have had more points than at Skate America. But again, we missed the throw Salchow and we made a mistake on the throw flip. There is a lot of room left for improvement and luckily this isn’t yet the end of the season.”

Canadians Meagan Duhamel and Craig Buntin finished second in the long program (107.97 points) and third overall (166.63 points) in an impressive comeback after the team was forced to stop the performance when Duhamel’s blade cut Buntin’s palm a couple of minutes into the program. After a consultation with the referee, Buntin had his right hand bandaged, but it soon became apparent that the bleeding was not stopping.

“Craig and I just went off pattern after the Salchow,” explained Duhamel. “We both made different mistakes, so we took a different turn on the exit, and unfortunately I just happened to kick him with my heel or toepick. It was a pretty scary moment, but at that time we knew we were going to keep going and Craig just told me ‘I’m not in pain’.

Despite the injury, the Canadian bronze medalists delivered an emotional and flawless second half of the program to the standing ovation of the crowd. Prior to the interruption, the team landed a triple toe loop-triple toe loop sequence and executed a level four Axel lift, however, Duhamel doubled a planned triple Salchow, while Buntin stepped out of his. When the couple took to the ice the second time after Buntin’s hand was bandaged, they executed two very good throws and a level four death spiral and spins.

Buntin received stitches on his hand before the press conference.

Maria Mukhortova and Maxim Trankov of Russia failed to deliver their playful Lady and the Hooligan routine to the maximum impact. After the drama of Duhamel and Buntin’s injury, the audience could not get into the upbeat mood immediately and the skaters probably felt the lack of feedback from the crowd.

The 2008 European silver medalist opened the program with a high triple twist, but then Mukhortova fell on her triple salchow. The landing of the throw triple loop was also flawed as she put both her hands on ice to prevent herself from falling. The 2008 Skate America bronze medalists were otherwise solid and all their non-jumping elements were graded levels three and four. Even more remarkably, both skaters showed a new level of expressiveness and confidence in this complex and stylish program in which Mukhortova portrays a young lady pursued by hooligan Trankov. The team placed third in the long with 106.03 points and second overall (170.87 points).

“We are not very satisfied with the performance,” said Mukhortova, “but this program is getting better with each competition and it was a lot better here than it was at Skate America. It’s difficult to skate this program, but we still have time before the European and World Championships.”

USA’s Tiffany Vise and Derek Trent finished fourth (93.52 points) in the free program, but remained in fifth (140.00 points) overall. They skated a neat and soft program to the music of Heroes and Return of Heroes, but had problems on the side-by-side triple jumps. The team also did not go for the quadruple throw, which they landed a year ago in Paris, but both their throw triple loop and throw triple Salchow jumps were solid and well done, as were their lifts, spins, and basic skating skills.

Huibo Dong and Yiming Wu of China placed fifth in the long program, after Wu fell on his triple Salchow. However, the 2008 World Junior Championships landed a strong triple toe loop-double toe loop combination, as well as two triple throw jumps. They scored 89.46 points for the long program and 140.58 overall.

France’s Adeline Canac and Maximin Coia finished sixth ahead of their compatriots Vanessa James and Yannick Bonheur and Melodie Chataigner and Medhi Bouzzine. The students of Annie Barbare and Aniick Dumout entertained the home crowd with their performance to The Cotton Club, but Canac had to fight for the landing of the throw triple loop. She also singled a double Axel and fell on a throw triple Salchow.