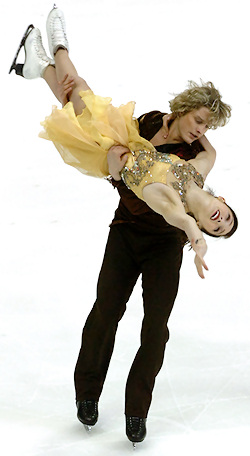 Meryl Davis, 22, and Charlie White, 21, swept all three phases of the Ice Dancing event to with their first national title.

For the first time since 2004, the United States has new Ice Dancing Champions. Meryl Davis (Arctic FSC) and Charlie White (Arctic FSC) took the torch from former training mates and friends Tanith Belbin and Benjamin Agosto, who withdrew from the championships due to injury.

“I think that we all wish Tanith and Ben a speedy recovery,” said Davis. “They have been a staple in U.S. skating for so many years, and they have done so much for our sport – specifically ice dance. We really miss them here, and hope that they get better soon.”

Navarro echoed those sentiments.”We hope that Tanith and Ben are healthy and get to go to Worlds. It will benefit all U.S. ice dancers. It would be weird not to have them at Worlds, so hopefully they will be there.”

The withdrawal put a damper on what was a spectacular competition, with all of the top finishers performing with the technical skill and artistic vision to skate with the best in the world.

Davis (22) and White (21) were clearly the class of the field, leading from the first phase of the competition, and growing their lead after each of their programs.

“It’s kind of surreal right now,” Davis said with a smile. “We said the other day that this is something that we have been dreaming of for years. To realize that dream now is surreal, but amazing nonetheless.”

“It’s a great feeling,” added White. “To be able to come here and skate three really good programs just adds to it.”

The newly-crowned champions skated a powerful and emotionally charged performance to music from Samson and Delilah that earned them a standing ovation. Along the way, Davis and White earned positive grades of execution on all eight of their program elements, as well a level four on six of them.

“We went out there hoping to give the whole package, and I think that we accomplished that,” said White. “We were able to perform well technically, and I felt that we really expressed the program well, which is something that we have definitely been working on a lot. I think that we can be really happy with our performance. We didn’t have to hold back, and we felt like that we were able to give our all.”

“A few years ago on the junior level, we lost to Charlie and Meryl by 21 points,” giggled White’s roommate Bates. “Maybe in another 40 years, we can beat them.”

Samuelson (18) and Bates (19) moved up two spots from last year’s championships, and had a stellar competition in just their second year on the championship level.

“Hopefully this says good things about our future,” Samuelson said. “It is the first season that we have been at senior nationals where we were strong and ready to compete because I was sick last year. To go out there and skate a strong performance is very meaningful.”

Skating to Tonci Huljic’s Amazonic, the 2008 World Junior Champions showed world-class elements and style that will bode well for them as they head towards the World Championships in March. Their lone mistake was on the combination spin, which earned them a level one and negative grade of execution.

“It was just a little mistake that won’t happen again,” Bates explained of their miscue. “Overall we’re really happy, and we’re excited that we get to go to the World Championships in our home country. To make our Worlds debut in the United States is something that doesn’t happen very often, and we are honored to go there and skate for our country.”

Other than that one mistake, the silver medalists were nearly perfect, earning a level four on five of their elements which helped them to earn a personal best of 88.39 points in the freeskate. Samuelson and Bates earned 181.64 points in total in the competition.

“I thought that we skated great,” admitted Bommentre. “To come out first in the warm-up is always a tough thing to do, and it always makes you a little more nervous. I thought that we handled that well, and we really focused on putting it all out there today in this performance.”

Navarro (27) and Bommentre (24) skated a quirky number to the music of Fatboy Slim, and received perhaps the most fanatical cheers of the night from a large group of ‘NavBoms’ fans. The dance, choreographed by Dancing With the Stars’ Louis Van Amstel, was in stark contrast to all of the other traditional dances of the evening.

“We have re-worked almost every piece of this dance since the Grand Prix,” revealed Navarro. “It has been a work in progress up until a couple of weeks ago, and we have had a great team of people helping us get this together.”

The bronze medalists earned a level four on five of their elements, and secured their place on the podium by earning 86.78 points in the free dance. Overall, Navarro and Bommentre scored a total of 176.30 points, far below their personal best.

Making an impressive debut on the championship level are the 2008 Junior Champions, Madison Hubbell and Keiffer Hubbell (Ann Arbor FSC), who are the training mates of silver medalists Samuelson and Bates.

Madison (17) and Keiffer (20) have a nice international look with long lines and difficult trick, and skated a mature program to Sognami by Damiano and Gianluca Nincheri.

The brother-and-sister duo earned high levels on all but one of their technical elements – the combination spin, for which they received a level one. Still, the couple performed well, highlighting the program with some impressive hydroblading moves that drew gasps and applause from the crowd.

The Hubbells scored 84.48 points for their free dance, and earned a competition total of 171.51 points – a new personal best.

Just missing out on the medals was the new team of Morgan Matthews (SC of New York) and Canadian Leif Gislason (Ice Works FSC). After a disappointing placement in the compulsory dance, Matthews and Gislason finished third in the original dance, and moved up from sixth after their The Muse free dance.

Matthews (21) and Gislason (25) have been paired together for less than a year, but are already capable of performing high-scoring elements. The tandem earned 83.00 points for their free dance, and just edged out Jane Summersett (Broadmoor SC) and Todd Gilles (Broadmoor SC) with a competition total of 169.52 points.

Summersett (21) and Gilles (22) maintained their sixth place finish from last season, struggling on their twizzle sequence and allowing Matthews and Gislason to edge them out by .27 points.