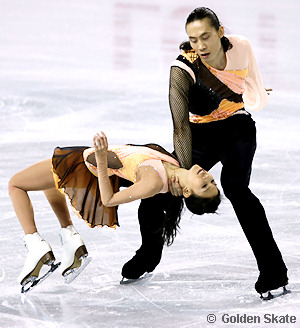 Qing Pang (29) and Jian Tong (29) of China placed first in the Short Program with their routine to Midnight Blues by Gary Moore.

Qing Pang (29) and Jian Tong (29) of China took the lead after the pairs short program, skating a sleek program to the music of Irish blues guitarist Gary Moore. The reigning Four Continents Champions are looking to retain the Chinese stronghold on the Four Continents title and attempting to win China’s eighth title in the event’s eleven-year history.

The Chinese champions opened with an uncharacteristic mistake as Pang doubled an intended triple toe loop to begin the program. The duo quickly recovered and skated clean from that point on, showcasing their trademark triple Lutz twist lift.

Both Pang (thigh) and Tong (Achilles tendon) have been plagued by injuries this season, but neither seem affected by the setbacks.

“We’re old,” joked Tong. “The injuries caused us some difficulties tonight, however, we are getting therapy and we’re getting better.”

“It wasn’t the program that we wanted,” added Pang. “but we hope things go better for us tomorrow.”

With a short program total of 65.60 points, Pang and Tong edged out Canada’s Jessica Dubé and Bryce Davison, who had a relatively clean skate early in the competition.

Skating to an orchestral version of Coldplay’s Fix You, the reigning Worlds bronze medalists opened with clean triple Salchows, but then made a small timing error on the landing of their triple Lutz twist lift. Dubé (21) and Davison (23) also received a one-point deduction for going over the time allowed for a short program.

“At the end of the program, we were a little bit late coming out of our pairs spin,” Davison explained. “We didn’t realize that we were late until we got off the ice, and (our coach) told us that we went over.”

The two-time and current Canadian Champions actually scored higher than the leaders on the technical elements marks, but had to settle for second due to lesser program component scores. Their short program total of 64.36 points is well off of their personal best, but it was their strongest outing this season.

“It’s our best short program of the year, and we are looking forward to carrying that momentum into the long,” Davison said.

Finishing in third place was Dan Zhang (23) and Hao Zhang (24) of China. After a strong opening of a beautiful triple Lutz twist lift and an easy throw triple loop, Dan Zhang singled an attempted triple Salchow.

“The jump was no problem in practice,” Dan Zhang noted, “but the rest of the program was without mistake.”

The two-time and current World silver medalists skated competently after the mistake, but seemed lethargic and calculated, which resulted in a sterile performance of their Riding on the Wings of a Storm program.

“I don’t feel like our speed was a problem,” admitted Hao Zhang. “The (music) itself is a little slow, but everybody skates differently, so to us, this was the correct speed.”

The Olympic silver medalists earned 63.20 points in the short program, and are close enough to the leaders to pull off a win.

In fourth place was the Canadian team of Meagan Duhamel (23) and Craig Buntin (28), who skated an inspired program to 4 Lamentations.

“It was a great performance for us,” said an energized Buntin. “It was a special moment for us, and we skated well. All of our levels were where we wanted them to be, so we are happy with what we did today.”

The Canadian silver medalists won over the crowd, and perhaps had the loudest ovation of the afternoon. However, Duhamel and Buntin only received a level one for their pairs combination spin, and also opted to do a double flip twist lift instead of the higher scoring triple that the top three completed.

“It’s a tough call (to attempt a triple twist),” Buntin said. “The overall impression is better with a triple twist, but if you look at score sheets, our level four twist is comparable with most of the level one and two triple twists in the world. For now, we are debating it, we’re working on a triple, and we’ll see how it goes.”

Duhamel and Buntin earned a new personal best of 62.08 points, and are in good position to steal one of the podium spots if any of the top three struggle in the free skate.

Americans Rena Inoue and John Baldwin finished in fifth place with 56.78 points after making mistakes on both the throw triple loop and triple Lutz twist lift.