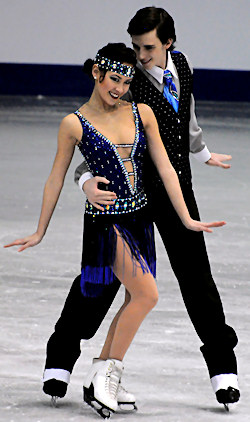 USA's Madison Chock, 16, and Greg Zuerlein, 20, perform to music from Minnie the Moocher and The Dancing Fool for their Original Dance at the 2009 World Junior Figure Skating Championships.

Madison Chock and Greg Zuerlein made a clean sweep of the major junior titles this season, both in the United States and internationally, hauling in gold at every event in which they competed.

After starting the season by winning their two Junior Grand Prixs in Italy and Great Britain, the couple won the SBS ISU Junior Grand Prix Final of Figure Skating in Goyang City, Korea in December.

They followed up by winning the U.S. National Junior ice dance title in January and the ISU World Junior Figure Skating Championships in Sofia, Bulgaria in February. They won each phase of the competition at each event.

“It was just so amazing being out there,” Chock said of Junior Worlds. “It was absolutely incredible and everything just felt good. It has been such a great experience this year.”

“Last year, we just wanted to get ourselves out there and show internationally what we are capable of,” Zuerlein added. “This year we’re more polished and ready. Our goal was to medal at the Final and at Junior Worlds. There was a lot of pressure on us to win Junior Worlds after we won the Final, but we tried not to think about it.”

“We want to skate well and show what we have,” Chock continued. “We knew that we had it in ourselves to win and hoped for the right circumstances.”

“Our long-term goal is to reach the Olympics, at least 2014,” Zuerlein shared. “It would be a dream come true to go in 2010, but that’s probably too much to hope for.”

“We’re not sure yet what we’ll do for next season,” Chock said when asked. “We’ll most likely be seniors in the U.S., which is a big step, and we hope to have another successful season.”

The dancers both overcame injuries this season. Chock had tendonitis in her Achilles tendon, while Zuerlein broke his hand playing softball last summer. “I had my hand in a splint for about a month,” he said. “I could skate but we couldn’t do lifts.”

Zuerlein started skating when he was four-years-old. “My parents took me and my older sister, Brittany, to open skating,” he recalled, “and we both wanted to skate more so we went to Basic Skills class.” Brittany competed at the Junior Synchro Worlds with her team. His mother also skated on an adult synchro team.

Zuerlein competed in singles, competing at the U.S. Junior Nationals in juvenile boys in both 2002 and 2003 before taking up dance in 2004. “Dance looked interesting,” said the 20-year-old. I started doing a few solo dance competitions, then had a tryout with two girls, and I’ve loved it ever since.”

Chock’s full name is Madison La’akea Te-Lan Hall Chock. “La’akea means sacred light from heaven and Te-Lan means special or unique orchid,” she explained. “My dad was born and raised on the Big Island. I am Hawaiian-Chinese on my dad’s side and German, English, Irish, French and Dutch on my mom’s side.”

Now 16, Chock first went on the ice when she was five. “My parents liked to watch skating on TV,” she remembered. “I started watching and got interested in it with all the girls in the sparkly dresses and wanted to do it.” She competed up to intermediate ladies at Regionals, but never reached the national level in the ladies’ division.

“When I was 12, some people approached me and asked me to dance,” recalled Chock. “I wasn’t really interested in dance but I tried it and I liked it.”

She also tried pairs. “I did pairs for fun and took all the tests through intermediate,” Chock said. “That was actually the tape I sent to Igor (Shpilband) when I wanted to come train with him.”

Chock and Zuerlein teamed up in June 2006 after they had both split with their previous partners. “We didn’t go to the partner search,” said Chock. “After we both split, we started skating together just for fun. It was convenient since we were both at the same club.”

“She asked if I would like to skate with her, basically asking if we wanted to skate together, and I was all for it,” Zuerlein added.

They placed fifth in novice dance at U.S. Nationals in 2007 and won the bronze medal in the junior division the following year.

Igor Shpilband and Marina Zueva coach the couple, who train in Canton, Michigan. They usually train on ice for three to four hours a day, five days a week.

Shpilband and Zueva also choreograph all of the couple’s dances. “We go over a lot of music choices with Igor,” Chock noted. “Then we choose what best suits us. We connect really well on the ice and we had done really well with West Side Story, so we thought we would try another love story.” “We like to have expressive music that builds a connection between us and the audience,” Zuerlein added.

The couple danced to the score of Phantom of the Opera by Andrew Lloyd Webber for their free dance. “We’ve seen the movie,” Chock stated. “It’s one of my favorite movies because it’s such an intriguing and beautiful piece – the music, the singing, the outfits. I watch it all the time.”

Chock and Zuerlein used Minnie the Moocher and The Dancing Fool for their original dance. “It took quite a while to find the right music,” Zuerlein said. “There were so many good music choices out there. The Charleston is upbeat. It’s fun and light and a good contrast with our free dance.”

“At the beginning of the season, we tried a jitterbug,” Chock revealed, “but I’ve always liked Chicago and I wanted to do the Charleston.”

“We didn’t make many changes in our free dance, but we were always changing the original dance after each competition until after the JGP Final,” Chock said. “We had a swing teacher come in and add the little things that make a difference.”

For an exhibition program, Chock and Zuerlein are using Aerosmith’s Come Together and Cryin.

Both of the dancers plan to be skating coaches and both work now coaching Basic Skills classes. Chock also teaches some private skating lessons, while Zuerlein works at the concession stand at an ice rink. He works about 20 hours a week, while she works ten.

Zuerlein is attending a community college, Schoolcraft College, taking 16 hours of classes. He plans to attend the University of Michigan in the fall studying business and information technology. Chock is a junior at Novi High School, where she is a member of the National Honor Society and was elected Student Council President in 2003.

“I want to do something along the lines of fashion marketing,” shared Chock. “I collaborate on the design of all my dresses and I’m always having ideas and making sketches in my book.”

Zuerlein enjoys playing soccer and softball with fellow skaters. “I played soccer from when I was four until I was 17,” he said. “I was a midfielder and played in premier leagues and on my high school team as a freshman. Now I just play for fun. I also play on a summer softball team with the other skaters in a recreational league.”

One of Chock’s off-ice interests is film making. She won the International Family Film Fest Award in 2003 for a screenplay that she wrote.

Her other pursuits include hanging out with friends and going shopping or to the movies. “I love to swim in the summer or play tennis or golf,” Chock said. “I’m also learning how to cook.”