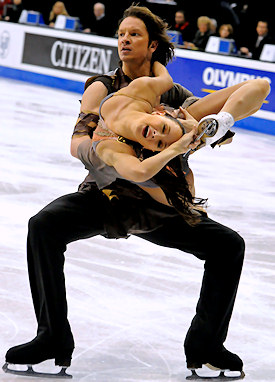 Russia's Oksana Domnina and Maxim Shabalin placed first in the Free Dance to win the title at the 2009 World Figure Skating Championships.

As expected, it was a tight race to determine the final placements and medals in the ice dance competition. Five teams had a very real shot at harvesting medals, and so many of the teams gave season’s best performances with everything on the line. In the end, the medals went to the top three teams after the original dance, and only two teams swapped placements in the top ten.

Winning their first world title was Oksana Domnina and Maxim Shabalin of Russia, who skated a competent program to Khatchaturian’s “Spartacus”. The 2008 European Champions earned level fours on seven of their eight executed elements, and defeated their training mates, Tanith Belbin and Benjamin Agosto of the United States by a little more than a point.

“Maybe in two days I will be excited and show my emotion about winning the title,” Shabalin admitted. “But right now, I don’t know how to feel. Of course I am happy, but I don’t think that I understand what has happened yet.”

After struggling with a knee injury all season, Shabalin admitted tonight that he was still feeling pain, even though he refused to admit it publicly throughout the competition.

“I think now I can say that it hurts,” said the champion. “But I couldn’t think about it because I had to skate.”

The Russians earned 100.85 points in their free dance, just .58 points more than the silver medalists, and 206.30 points overall.

“We are friends,” Shabalin said of his training mates. “But we are not close. I hope that will come.”

Belbin and Agosto skated before Domnina and Shabalin, so they had to wait to see if their score would hold up for the gold medal. The five-time US Champs skated a credible program to Puccini’s “Tosca,” and like the champions, earned 7 of 8 level fours.

“The difference in gold and silver could have been our level three twizzles, but who knows,” Belbin said. “We know that we are never going to have a title handed to us, so we are just going to have to be extremely perfect.”

The silver medalists showed inventive and difficult lifts throughout their program, and nearly managed to defeat the Russians on the technical components as a result.

“This year we made so many changes,” Agosto explained. “The coaching change and just trying to change everything about the way we perform. This program really allowed us to develop a new side to ourselves in a new and mature sense.”

Belbin and Agosto earned a season’s best 100.27 points and 205.08 points overall to return to the podium after a year’s absence.

Finishing in third place with an intense performance skated to the music of Pink Floyd are the Canadian champions Tessa Virtue and Scott Moir.

“Tonight was all about us,” Moir admitted. “We just wanted to go out and skate not for what the judges thought, but what we thought. We skated the best that we could, and we are very happy about that.”

The 2008 silver medalists earned level four for all of their elements, and as a result, equaled the champions’ technical components score. Any sign of Virtue’s injury was masqued by the great performance that was put forth, and their lifts were arguably the most interesting and daring of the evening.

“I felt way stronger and was able to push through the performance more at the end,” Virtue said. “I wasn’t even focused on my legs. Mentally it’s such a treat to not have that constantly running through my mind.”

The bronze medalists finished fourth in the free dance, and narrowly edged out their training mates by just .04 points overall. Their free dance total was a season’s best 99.98 points, as was their competition total of 200.40 points.

If the audience would have had a vote tonight, perhaps Davis and White would be wearing medals around their necks. The American champs received the loudest ovation of the evening, and there were many who felt that they should have been standing atop the podium.

“I think that was probably the best performance that I ever felt,” said an elated Davis. “Competing at Worlds in our home country has been wonderful, and to finish with a performance like that with that kind of audience reaction just means the world to us.”

The Four Continent’s champions earned the highest technical marks of the night, outscoring the gold medalists by half a point. In fact, Davis and White placed third in the free dance with 100.03 points, but the deficit lingering from the compulsory dance was just too much to overcome. In total, Davis and White earned 200.36 points overall, a new personal best for the duo.

Moving up to fifth place was the French team of Nathalie Pechalat and Fabian Bourzat with a bizarre if not technically challenging program to circus music.

“My hands were shaking because I was so eager to get out on the ice,” admitted Bourzat. “The American crowd gave us good support.”

Pechalat added, “We had a good competition overall, and we are very happy with our performance. We love this program and we were very ready.”

The French earned personal best scores in each phase of the competition and overall, but were unable to move into medal position because the other teams were just a tad bit better.

“We aren’t far away from the World podium,” said a philosophical Bourzat. “We should be able to touch it next season.”

The French champions scored 95.99 points in the free dance and 194.36 points overall.

Slipping to sixth place after placing fifth in both the compulsory and original dances were the European champions Jana Khokhlova and Sergei Novitski from Russia. Khokhlova and Novitski were given credit for six level four elements, but incurred a one point extended lift deduction that dropped them down a placement overall.

“Coming here we were ready for anything,” admitted Novitski. “We could win or end up far away from the podium. Obviously the second possibility came true. But this is not our last World Championships. I think that we skated our free dance very well today.”

The Russians earned 94.39 points for their Rachmaninov program, and 193.41 points overall.

Sinead Kerr and John Kerr from Great Britain maintained their seventh place position after the original dance, their best placement at the World Championships.

“This has easily been the most successful season for us,” John said. “We would have like to been a little higher, but we can’t complain. There is always next year.”

Sinead agreed, “It’s been fantastic. I think that we were really ready for this World Championships, and having it in Los Angeles was incredible.”

Finishing in a disappointing 8th place are Italian champions Federica Faiella and Massimo Scali. The European silver medalists had a tough time recovering from a disappointing compulsory dance, and never performed up to their usual standards.

“I am proud of Federica,” Scali said of his partner. “She hasn’t been feeling well the past few days. She has been dizzy and close to passing out. We think that she is a little dehydrated. But after yesterday, we had to skate clean and we did. So, we feel really proud.”

“We gave all of our energy in this program, and the public supported it very much,” Carron said. “The music had a lot to do with that, and I am very happy with our performance tonight.”

“We felt like we fought through to the end,” Cappellini said. “But it was one of those days when things weren’t flowing perfectly. We didn’t get scared. We fought.”

American silver medalists Emily Samuelson and Evan Bates placed 9th in the free dance and finished in 11th place overall in their Worlds debut while Canadian silver medalists Vanessa Crone and Paul Poirier slipped to 12th place in their first trip to Worlds.