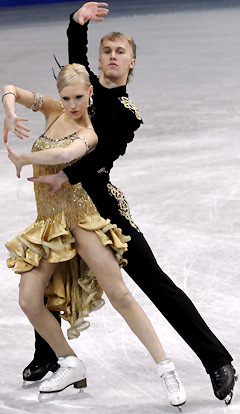 Findlay started ice dancing in 2005, competing with Liam Dougherty. They placed eighth in senior dance in Canada in 2006 and seventh in 2007, before the couple split up. “I wasn’t really comfortable in Montreal,” Findlay said. “There was a big age difference between Liam and me. I was really homesick, so I went back after we split up, but I realized that I still wanted to skate.”

“Benoît and I started skating together in November of 2007,” Findlay stated. “When I decided I wanted to continue, I put my profile on icepartnersearch.com and Benoît’s coach found it and sent me a message about a tryout.”

After the tryout, the dancers decided to compete for France rather than Canada. “There are not as many couples in France,” Findlay said, “and some of them will leave after the Olympics next year. Also the French federation did not want to let Benoît go. It’s easier to get a passport as well, and we would be eligible for the Olympics in 2010, but our real goal is 2014.”

The couple finished tenth at the 2009 World Junior Figure Skating Championships. “We wanted to come to the Junior Worlds and be in the top five,” Richaud said, “but after the compulsory dance, it was not possible. You can’t expect to be at the top in your first year.”

The couple won the bronze medal at the French Nationals and qualified to skate at the 2009 European Championships, where they placed 19th. “It was a pleasant surprise,” Findlay said. “We didn’t expect to do both Europeans and Junior Worlds. Next year, we will only do seniors.”

“It will be another year of preparation and progress together,” Richaud said. “We want to build a better connection between the two of us. But we will really start training hard after the Olympics next year.”

Richaud started skating when he was seven. “My cousin was in a skating club and I saw her in a show and wanted to try,” he said. “I skated until I was nine and then I decided to play rugby for three years. I was a forward. When you are young, you don’t want to be in a sport for women. In France, men play soccer or rugby.”

“I really missed skating so I came back,” he continued, “and competed in singles. I was not at any big competitions but I could do up to a triple toe loop. Then I saw Marina (Anissina) and Gwendal (Peizerat) win at the Olympic Games. I was always better at choreography than jumps so my coach said I should go into dance.”

“I started dance when I was 14,” he continued. “I decided I needed to go to the best place in France so I came to Lyon. I skated alone for two years to learn all the steps and the compulsory dances, then I competed for a year with Scarlett Rouzet and two years with Elodie Brouiller.”

Richaud and Brouiller placed as high as seventh at the World Junior Figure Skating Championships in 2007. “We had a bad relationship,” Richaud admitted. “She was too old to continue in juniors and I wanted to keep trying.”

Findlay comes from a skating family. Her mother is a skating coach and her father and brother both play hockey. She started skating when she was three.

Findlay first competed in ladies, placing third in novice in 2003 and 12th in juniors in 2004 at Canadian Nationals. She then competed in pairs (with John Mattatall), winning the silver medal in junior pairs at Canadians in 2004 and placing seventh in senior pairs in 2005. The couple placed tenth at Junior Worlds in 2004 before she switched to ice dance.

“It was difficult for me at first because I didn’t know a lot about dance techniques,” Findlay said. “My basic techniques were completely different from what Muriel (Zazoui) and Romain (Haguenauer) taught, but I found that I wasn’t homesick. Maybe because I was older and I really love France.”

For the 2009-10 season, Findlay and Richaud plan to use an American Native Indian folk dance for the Original Dance and music from Cinema Paradiso for their Free Dance. They worked with Pasquale Camerlengo and Anjelika Krylova in Detroit on both routines.

Findlay and Richaud are currently slated to compete at the  Rostelecom Cup (formerly Cup of Russia) in Moscow, Russia. There is also a third vacant slot for a French ice dance team for Trophée Eric Bompard, however, that slot will be determined after the  2009 French Master’s Figure Skating Championships (Master’s de Patinage) is held the first week of October.

Off ice, Richaud likes to ride his motorcycle and spend time on his computer. “I watch skating videos and dance films and talk with my friends on Facebook,” he added.

Findlay enjoys going to movies, shopping, and reading, especially ancient history. She tries to go home to Canada to visit her family whenever she has a break from skating.

Richaud has graduated from high school and passed his examinations to coach in France. “I teach skating now for 15 hours a week,” he said. “I teach the younger ones and dance couples, a little bit of everything.”

Findlay is finishing high school by taking classes over the Internet from Canada. “I didn’t want to try and finish in France because the system is different,” she explained. She plans to major in communications and journalism in university, aiming for a career as a sports broadcaster.