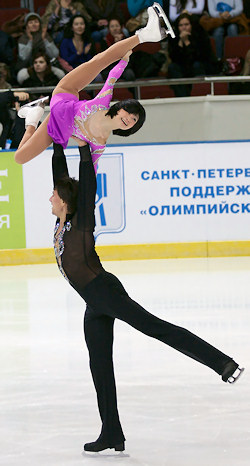 Yuko Kavaguti and Alexander Smirnov execute a lift in their Free Skate at the 2010 Russian National Figure Skating Championships.

Kavaguti and Smirnov did not attempt a  throw quad Salchow, but landed two clean triple throws, side-by-side  triple toes, and a sequence of two double Axels.

“Today our coach told us before the  start not to attempt a quad throw,” Smirnov later explained. “Even though we have landed a clean  one in the morning practice. She told us that in the present  circumstances it would be better to do a  “simple” triple throw. You  have seen the rest yourself: high flight, great landing, and Yuko’s  smile. You have to ask Moskvina for her reasons, frankly, we were a  bit upset by her choice.”

Though the students of Tamara  Moskvina aborted one of their lifts,  the overall level of their performance was much better than during  Grand Prix season. The team expressed the waltz character better, and   were smoother and more confident than before. They earned an ovation from their home crowd, and placed first in the long with 142.60 (67.92/74.68) points and overall (220.61 points) to easily defend their title.

“Winning the third straight title is as pleasant, as it is difficult,”  said Smirnov afterwards. “It’s one thing to win the title once, but to  repeat again next year and then the next is a completely different  story. Believe me, it is hard.”

“I think we have skated this program better in the Grand Prix event in  Japan,” he continued. “Today was a good performance, but I got worried during one  lift. I was able to fix it quickly, but the aftertaste remains.”

Mukhortova and Trankov  gave an emotional  performance which was very well received by the crowd, however, from the  technical standpoint, it was their worst run-through of the season.

The team opened their Love Story routine with a clean triple twist and  side-by-side double Axels, but Mukhortova underrotated a double toeloop  in combination with a triple toeloop and crashed on the throw triple  Salchow. However, the skaters exhibited  far better rapport and related to each other more noticeably  than they  have in the past. Their program is looking more like a romantic  and lyrical piece as suggested by the music.

“It was the worst skate of the season,” said Trankov. “We got two  deductions, one of them for something silly like Masha loosing a  ribbon.”

“We are a bit upset,” added Mukhortova, “We had a fall, but I’m more  upset about the other deduction. But better it happens here than later. We still have important starts ahead of us. We plan to make new  costumes for the Europeans anyway.”

“The current ones are unlucky,” agreed Trankov, regarding the costumes. “First, I had a  costume malfunction in Canada, and now Maria. We are looking forward to Europeans now. We will work hard and hope to skate better. We  usually perform better abroad.”

Bazarova and Larionov finished third in the long with 116.39 (59.20/58.19) points and overall (178.65 points). Bazarova fell  on the opening triple toeloop and had tight landings on both jumps in  the double Axel-double Axel sequence. Nevertheless, they produced a  clean triple twist and two triple throws. Their soft and lyrical style  appealed to the audience, who warmly supported them throughout.

Lubov Ilushechkina and Nodari Maisuradze of Moscow (MOS) finished fourth in the long  program (110.82 points) with a error filled performance. Ilushechkina fell on an   underrotated triple Salchow, underrotated a triple toeloop, and stepped  out of the throw triple loop. Despite the errors, the  team had one of the most complex and intricate  programs of the field and produced a level two triple twist  and strong lifts. They finished fourth overall with 170.49 points.

Tatiana Novik and Mikhail Kuznetsov (MOS) opened their routine with side-by-side triple loop  which were executed in  perfect unison. They later attempted a side-by-side triple Salchow-double Axel sequence, but  stepped out of the second jump. Novik also fell out of the landing of  the throw triple Salchow and only performed a double twist. They placed fifth in the long (104.41 points) and overall (104.41 points).

“We are satisfied with what we did today,” said Kuznetsov. “It was not  perfect. “We did make some mistakes again, you saw it yourself, but  overall it was good. Previously, we had made the mistakes in the  beginning of the program, now we made them in the second half of it. I  guess we were a bit tired.”

“It was a long season,” he continued, “and besides we are  only skating together for seven months. We both skated with other  partners before, so we have worked very hard. We basically don’t have  any holidays. Even for the New Year I will not travel back home [to  Tcheliabinsk], because we have to prepare for Junior Nationals.”

Ksenia Ozerova and  Aleksander Enbert (SPB), who stood in 12th after the short, placed sixth in the long and overall.

Ksenia Krasilnikova and  Konstantin Bezmaternikh (PRM), who stood in seventh after the Short Program, withdrew due to injury. Krasilnikova fell hard on the a throw triple flip half way through the long program.