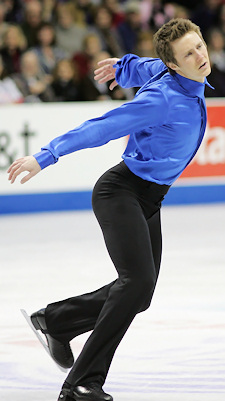 The more things change, the more they stay the same.  Jeremy Abbott changed just about everything in his life in the past year: his coaching staff, his training location, and the way he trained for competition.  But his results at the U.S. Championships have not changed.

Abbott blew the roof off the Spokane Arena tonight with the best performance of his up and down career to capture his second consecutive U.S. title.

“I’m speechless,” Abbott said of his winning performance.  “Last year, this is what I thought my first title would feel like, but here I am a second time.  It just feels like the first time.”

Abbott, 24, opened his Saen-Sans’ Symphony No. 3 program with a quadruple toe loop that set the tone for the rest of his exquisite performance.  The 2009 Grand Prix Final Champion skated without even the smallest mistake, and earned a new U.S. Championships record score of 263.66.

“After the quad, it was business as usual,” Abbott explained.  “I still had seven jumping passes and eight triple jumps to do.  I stuck to my plan, stayed focused, and finally did what I’ve been doing in practice.”

In addition to the quadruple jump, Abbott also nailed eight clean triple jumps, and was named to the Olympic Team that is heading to Vancouver next month.

“I have a lot of hard work to do in the next couple of weeks, and I’m really looking forward to it,” Abbott said about his plan for the Olympic Games.  “We have not mapped out what I will do as far as Opening Ceremonies and everything yet, but it’s going to be very exciting.”

Finishing in second place is another  two-time champion Evan Lysacek.  Like Abbott, Lysacek opened his Scherazade program with a quadruple toe loop attempt, but the reigning World Champion wasn’t as lucky.

Lysacek was credited with six clean triple jumps, but popped a triple loop attempt into a double.  Though the 24-year-old only finished in third place in the freeskate, his total score of 238.63 points was good enough for the silver medal and a repeat trip to the Olympic Games.

“I think that we have a very strong team,” the Grand Prix Champion said.  “I am very honored to be named to this team, and to be standing next to these guys tonight.  And of  the six, seven, eight, nine, or ten incredibly talented men who competed tonight, we came out on top and we’re representing that strength that we have in skating in the United States.”

Former U.S. Champion Johnny Weir, held his position from the short program to win the bronze medal and will join Abbott and Lysacek in Vancouver next month.

“Like Evan, I have mixed feelings about how my skate went tonight,” Weir admitted with a sly grin.  “I suppose I am kind of saving that perfect type of performance for a certain kind of event that may or may not be happening soon.”

In his “Fallen Angels” program, the Grand Prix Final bronze medalist had a strong opening with three clean triple jumps, but then he popped a second triple Axel attempt before struggling on the back half of a triple-triple combination. As a result, the 25-year-old had to depend on his lead from the short program to keep him in medal position as his freeskate was judged as only the fifth best of the night.

“My costume looked pretty, so I am happy about that,” Weir admitted with his usual blend of optimism and sarcasm.  “When I looked at the replay, I didn’t pay attention to my technical elements.  I know what my mistakes were.  I looked at my beautiful costume and thought about how fantastic it looked.”

Weir’s total of 232.09 points was good enough to propel him to his second Olympic Team in three tries.

“I’m much more mature about my job and the product I put out on the ice,” Weir said about his changes since representing Team USA in the 2006 Games.  “This season, I decided that skating needed to be number one.  Now I can use all of that experience and knowledge that I had in Torino.  I have tunnel vision now about skating, and that’s where I am right now.”

Former U.S. silver medalist Ryan Bradley had perhaps the skate of his long career, finishing in second place in a freeskate that featured two quadruple toe loop jumps to start.  Always a crowd favorite, Bradley did not disappoint in his whimsical Baroque chamber music program.

“The crowd is everything for me,” admitted Bradley after catching his breath.  “When the announcer called my name, I decided to set the mood immediately so that all of those out there who don’t know me knew that it is okay to laugh at me when I skate.  I’m not skating by myself out there.  If I include them, then it makes everything so much more special.”

Bradley was too far back in the standings after his disappointing short program to catch the top three, but his score of 225.07 points is a new national best and was good enough for a second straight pewter medal.

“It felt great out there,” Bradley said of his performance.  “I have been doing this type of performance in practice over and over, but to do it in front of thousands of people is another thing.”

The only man to receive credit for multiple quadruple jumps in one program at the U.S. Championships since Timothy Goebel was quick to point out that the jump is his ace in the hole.

“If I didn’t have a quad, I wouldn’t even have had a shot at an Olympic Team,” Bradley said with his usual flair.  “It was a risk that I had to take, and as a quad jumper, I wish the reward were a little higher.  I had to know that I did everything that I could to give myself a chance to make the team, and I can be happy that I did that in this program.”

Finishing in fifth place is the two-time World Junior Champion Adam Rippon, who slipped from fourth place after the short program with an uneven performance.

Rippon did land seven triple jumps, but received negative grades of execution on both his triple Axel combination and solo triple Axel.  His freeskate total was good enough for fourth place in that segment of competition, but his total of 225.07 points was just short of making the podium here in Spokane.

“I’m just going to take this all into perspective,” reflected the curly-haired Rippon.  “I need to see where I can build from this, and regardless of the results, I learned a lot here this week.”

Last year’s silver medalist Brandon Mroz pulled up from tenth place after the short program to finish in sixth place overall with a total of 201.27 points.  The two-time U.S. Junior silver medalist redeemed himself by landing seven triple jumps in his program, and reinforced that he is someone to contend with in future championships.

Finishing in seventh place is Grant Hochstein, a Junior Grand Prix Finalist in his senior debut at the U.S. Championships.  Hochstein earned 192.73 points in the competition, and should be selected to compete in the World Junior Championships in The Hague in March.

Just behind Hochstein are two other junior age eligible skaters: Armin Mahbanoozadeh, who finished in eighth place, and Keegan Messing, who finished in ninth.  Mahbanoozadeh plummeted from fifth place after the short program with a five triple jump performance.  Messing conversely moved up from twelfth place with an exciting performance to music from The Incredible Hulk, and was a definite crowd favorite.

“To put it into one word, that was amazing,” Messing said with his trademark swagger.  “The main reason why I moved up from junior to senior was for the crowds.  Last year the crowds just weren’t big enough for my taste.  I barely saw an open seat and it was great to perform in Skate City USA.”

Rounding out the top ten was Jason Wong, who moved up seven spots from his 17th place finish last season.

Following the Championship men’s freeskate, the novice men took to the ice for their short program, and tiny ten year-old Nathan Chen (Salt Lake Figure Skating) finished first with a score of 51.24 points.

“That was good,” Chen said.  “I skated to Kung Fu Panda, so the character was easy to portray.”

The four foot-five inch Chen is also a hockey player, a gymnast, a full-time fifth grader, and also plays the piano.

“I skate for three hours after school, and I like reading and writing in school.”

Chen plans four triple jumps in his free skate to Peter and the Wolf on Monday afternoon.

“The program was really good,” said Vollmer. “We skated our best and did all of our elements really well I thought.”

“Competing internationally prepared us a little bit to what we’re supposed to look for in skating,” she continued. “We learned that we needed to improve our speed, posture, and presentation.”

“Our goal was to skate our best,” added Sidhu. “It didn’t matter what place we got.  Just go out there and do what we have to do.”

,Ashley Cain and Joshua Reagan (both from Stars FSC of Texas) finished a close second with 37.35 points.

“It went well today,” said Cain. “We’ll just go out there again and do it in the long.”

“Our relationship on the ice was very well connected today,” added Reagan. “Our jumps and throw were very good today.”