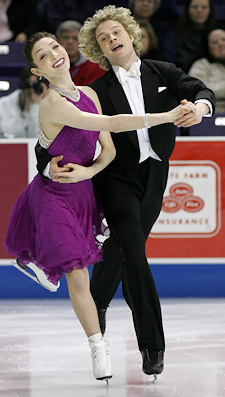 Meryl Davis (Arctic FSC) and   Charlie White (Detroit SC) came out today and skated to win the Golden Waltz, and they did just that with a score of 45.42 points.  Despite the fact that this was the season debut for Davis and White with the Golden Waltz, they were still able to weave together a world-class performance.

“We felt really, really good,” Davis said.  “We’ve been working very hard on this dance, harder than we’ve ever worked on a compulsory in the past, and we feel really confident about it.”

The defending champions looked well prepared to challenge, not only for the title here in Spokane, but perhaps for an Olympic title next month in Vancouver.

“This confirms that we have been working very hard,” White said of their first place finish.  “The judges rewarded us for what we did out there, and it’s nice to see all of our hard work pay off.”

Throughout the program, Davis (23) and White (22) demonstrated a newfound confidence and deeper emotional connection than they have in the past, and believe that they are trained to win their second U.S. title here in Spokane.

White added, “It’s very important to finish first and head into the Olympics as the U.S. Champions.  That means a lot to everyone across the world, so that’s really our goal here.  We’re going for Olympic gold, so we want to go as one of the top dogs.”

Five-time champions Tanith Belbin and Benjamin Agosto (IceWorks SC) skated in the first group of competitors in the event, and threw down the gauntlet immediately with perhaps the most inspired Golden Waltz of their storied careers.

“We’ve been working really hard to try to make this dance as smooth as possible,” Agosto said immediately after he skated.  “We’re very happy to be able to do what we do in practice out here this morning.”

Belbin added, “There’s always little nit-picky things like timing and such that we can always work on, but overall I feel like we attacked it more which is what we were going for.”

The Olympic silver medalists missed last year’s championships due to injury, and are hungry to win back the title from their former training mates Davis and White.

“It’s very motivating to have Meryl and Charlie come into their own,” Agosto admitted.  “We push ourselves harder, and it makes for a very interesting event.”

“Of course we always want to be number one, and that it’s always been our goal to be the best in the world,” Agosto continued.  “The only way that we are going to achieve that is to put placements out of our mind and skate the very best that we can without holding anything back.”

Belbin (25) and Agosto (28) skated with passion and attack, earning the duo 45.02 points for their efforts.

“I think that we always sort of feel like underdogs because we haven’t reached that top spot in the world just yet,” Belbin shared.  “I think that it’s a really good thing that we don’t come into this event too complacent because we really need to go all out in the competition if we want to come out on top.”

“It was really good to get the first one out of the way,” Bommentre, 25, admitted.  “I think that for us in order to skate well, we have to stay focused and we did that.”

Navarro agreed.  “It’s something that we’ve been practicing but  haven’t really ever achieved leading up to this competition.  We did that here, and it felt really good.”

The reigning U.S. bronze medalists have traditionally focused their season on maintaining an artistic integrity in their programs, but have shifted that focused a bit with so much on the line this season.

“(Our goal) hasn’t changed, but it has been more difficult to do, because of that thing (the Olympic Games) that is on everyone’s mind.” Navarro, 28, admitted.  “Of course it is on our minds too, but that’s not the team that we are and that’s not what makes us work together.”

“This felt like a big improvement from when we competed (the dance) in France,” Samuelson admitted.  “We’ve been working on the flow through the dance a lot to make it look effortless, and it seemed like it came together today.”

Samuelson (19) and Bates (20) demonstrated much improved connection on the ice in this dance to go with their already strong technical prowess, and were pleased with the audience response to their program.

“We’ve skated together for ten years, but a lot of that was growing pangs and getting our technique together,” Bates explained. “Now that we’ve become adults, the connection is something that we’ve been working on.”

“The audience here in Spokane has been great,” Bates continued.  “This competition was held at like 10:30 in the morning, and there are literally thousands of people in the stands for the compulsory dance.  It’s just amazing.”

The dancers will be back in action tomorrow with the original dance, and the medalists will be determined after the free dance on Saturday.