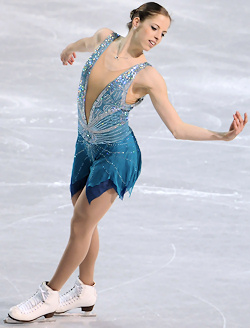 In recent years, European ladies were rarely medal contenders at the major championships, with the exception of Italy’s Carolina Kostner. Taking this into account, the overall level of the Ladies Long Program in Tallinn could not be called anything but a disappointment.

The highest number of triple jumps containing jumping passes with a grade of execution equal or higher than -1.0, is four per program. Even that much was achieved by only three performers, while the majority settled for three or less.

The only good news of the entire event, is that Kostner seems to be well on the road to recovering her competitive shape. The Italian won her third continental title over defending champion Laura Lepistö of Finland, and the surprise bronze medalist was Georgia’s Elene Gedevanishvili.

“My first emotion was [feeling] a little bit angry that I opened the flip, which took a bit me off my road,” Kostner later said.

Still, Kostner’s  program to Bach’s Air and Vivaldi’s Cello Concerto was one of the highlights of the event due to the overall quality of choreography, as well as the obvious pleasure the she derived from finally leaving most of her problems behind.

“The secret is never to loose confidence,” said the Italian silver medalist. “You could never loose your skating, you can only make it difficult for yourself by having too many different thoughts. I think I was finally able to free myself from all those thoughts which made my body heavy.”

“It was quite nerve racking,” Kostner  told the audience. “I have to say I really enjoyed skating today in front of all you. Thank you very much for your support and for this wonderful afternoon.”

Kostner  relocated to California and said that it has not really changed all that much in her life. “For an athlete, the life is the same: you get up, you eat, you train, you go back to sleep…so it’s not much different. But I feel very comfortable now, with new motivation and ideas, and a very strong training group.”

Regarding the Olympic Games, the student of Frank Carroll who was accompanied by Christa Fassii to Tallinn, has no set plans. “A lot of water has flown through the rivers since the last Games. Basically I want to find a performance for myself, how I see it in my head, and then just go out there and do it. I’m training very hard, I’m very pleased with how it’s going. I think I have nothing to fear for Vancouver.”

With new confidence and coming off a third European win, Kostner  promised to put a triple-triple combination back into her short program for the Olympics.

Gedevanishvili was the only skater to get more than 50 points for the technical content of her program. The 20-year-old hit a strong triple toe loop-triple toe loop-double toe loop combination, but fell out of her opening triple Lutz landing and popped a Salchow into a double. Her only other clean triple was another Salchow in the second half of the program, but the quality of her spins and spirals and her fierce representation of Carmen earned her 103.72 (50.20/53.53) points for the long. With a total score of 164.54, she pulled up to the third place overall to win the bronze.

“Oh my God, this is totally unexpected!” exclaimed the newly crowned medalist. “It means a lot to me. I was very well prepared and I will carry this feeling to the Olympic Games. I am very proud now. I am happy with my performance, but it’s a pity I didn’t do the Salchow and I didn’t do a combination.”

Gedevanishvili’s  music choice was apparently a long-time dream. “I have always wanted to skate to Carmen since I saw Katarina Witt, and this music really fits my personality,” she said.

The skater, who failed to make the long program cut at the last year’s Europeans, credits her move to train with Robin Wagner for her current success. “I was very unhappy with my performance then. Then I went to Junior Worlds and I did well, especially in the short program. It really inspired me. I changed coaches and I have been working with Robin since the last Europeans.”

The skater also receives a lot of support from  Georgian President Mikhail Saakashvili. “Before the short program, the Georgian president called me and we skated on the outdoor ice rink in the old town. He is a pretty good skater!” she told the press.

Skating right after Gedevanishvili, Finland’s Laura Lepistö  opened her tango program with an excellent triple toe loop-triple toe loop combination, but things quickly went downhill from there. The defending champion popped a Lutz and a loop into doubles, and underrotated the second triple loop.

“It started very well with a triple-triple and I felt really good, comfortable and confident,” said the Finn afterwards. “But then, after those double jumps, I lost that feeling a bit and made stupid errors on the landings. It could have been better but I’m still happy with the silver.”

With one of the lowest technical scores in the top ten, Lepistö had to thank her precise execution of the tango choreography and her strong basic skating skills for earning her  high enough a component score to keep her on the podium. The Finnish Champion placed third in the long with 103.41 (44.21/59.20) points and second overall (166.37).

The skater now has a full set of medals from the Europeans. “Yes, I just noticed it myself. I got all three medals. I didn’t actually expect a silver medal after my performance, but a medal is always very nice to have.”

Switzerland’s Sarah Meier needed 154 points in total to meet her national Olympic committee qualification criteria and earn a ticket to Vancouver. The former European medalist gave a performance where the only clean triple was her opened triple Lutz-double toe loop-double loop combination, and can hardly be considered a stunning success. Nevertheless, she achieved her goal by placing fourth in the long program   (102.58) and fifth overall (157.44).

“I am realistic, I knew I wasn’t going to move up a lot skating in the second to last group, but I wanted to fight for my Olympic qualification, ” said the skater  who finished eighth in the short. “I needed 154 points and I got that. After the short program, I actually found my motivation again only in the last moment. I felt that it’s worth to fight at least for the Olympic qualification and that I shouldn’t give up. The missed practice time [due to injury] didn’t affect me, but the lack of competition did.”

The short program’s runner up, Kiira Korpi of Finland, was the last skater in the competition. It seemed at first that the 21-year-old would win the first European title of her career as she checked off a  triple Lutz-double toe loop combination, a triple Salchow-double Axel sequence, a triple flip, and a triple loop.

However, Korpi made costly mistakes in the second half of the program which did not contain a singly fully rotated triple, and her spiral sequence and flying sit spin received only a level two, which contributed to a very low technical score. She scored 99.42 (43.48/57.04) points, and with 163.68 in total, missed the podium by less than a point.

“Beginning was good, then I lost strength and I had to fight for the rest of the program,” Korpi admitted. “I didn’t follow other skaters. I was concentrating on my own skating. I made progress from last year, but I still need to work on the free skating.”

“I am very disappointed right now,” added the 21-year-old, “but I reached my main goal – to get the spot for Olympics. I have more experience now [than during the 2006 Games] and I have improved in many levels. I can fight for the top ten, maybe even the top six, if I do a short program like here and a better free skating.”

Julia Sebestyen of Hungary had a hit-and-miss performance to Voice of Violin in which she succeeded only on every other jump of her planned content. However, the quality of those three triple jumps she landed, especially a huge triple Lutz, was enough to finish sixth in the long (99.33) and overall (156.77).

“I am not very sad about the fact that this is my last Europeans, because I participated in international competitions for a long time already,” said the  28-year-old. “But it’s hard to think that it is almost the end.”

Alena Leonova of Russia slipped to seventh place overall (153.57) after an error-filled performance to music from the Chicago soundtrack. The 19-year-old once again attempted a triple-triple combination, but two-footed the landing of the second triple (which was not ratified as fully rotated), fell on an underrotated triple Lutz, and popped  both attempts on the triple flip.

“I don’t know exactly why she skated poorly,” said Leonova’s coach Alla Piatova. “I could see that her feet were heavy. There was no lightness and she lost speed and made mistakes. During training and warm-ups she was ok. Perhaps she felt the responsibility she had at this competition, and because of it she concentrated too much and she wasn’t able to skate freely.”

Italy’s Valentina Marchei missed both triple Lutz attempts, falling out of the first one and two-footing the second one, and crashed into the boards after an underrotated triple Salchow.

“It didn’t hurt very much,” Marchei later told the press of her collision with the boards.

However,  two clean triples and her sharp presentation to the soundtracks of 2046 and Requiem for a Dream allowed her to finish in eighth place (149.46).

“I was confident and good in practices,” contemplated the 23-year old. “It wasn’t good, but it wasn’t a disaster. There was more pressure out there. I am happy because I was fighting until the end.”

Ksenia Makarova of Russia underrotated the back end of a triple toe loop-triple toe loop combination, as well as a triple flip and triple loop. However, the 16-year-old managed to produce two clean triple Salchow combinations in the second part of her program, finishing ninth (146.85) in her first European Championships.

“I was extremely glad when I found out that I would go to the European Championships,” said the Russian Champion. “I couldn’t wait for that moment. I am very happy to be here. I felt a lot of responsibility to skate in a competition of such a high level. I slept well last night, but I still was more nervous than at nationals.”

The debutant was enjoying the experience of attending a major championships. “I was watching the Men’s competition and I liked Plushenko best. When he came to the ice, I knew at once that he would win. The look on his face…I would love to have one like this. Maybe I will ask him today how to get it.”