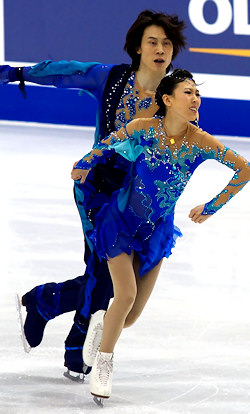 Qing Pang and Jian Tong of China scored a new personal best with their routine to The Pearl Fishers at the 2010 World Figure Skating Championships.

Pang  and Tong, who have already fulfilled their seemingly impossible dream of winning an Olympic medal, brought their skating to a completely new level in Turin. The days when the team relied on huge tricks to outscore their opponents are over and even though their triple twist and triple throw was as impressive as ever, the most noticeable aspect of their performance, was their total commitment to the choreography and excellent interpretation of Pearl Fishers routine. The Chinese team even scored a level 4 on their straight line footwork.

“We are very happy because we achieved our personal best today,” said Tong at the post event press conference. “The main difference to Vancouver was that at the Olympics everyone was nervous and under a lot of pressure, but here, we were able to relax and enjoy our performance.”

Kavaguti and Smirnov seemed to have recovered from the disappointing performance in the Olympics long program. The couple was basically clean except for a flawed catch on the triple twist, and while they fell one point short of their personal best, the overall impression of their routine to The Swan was as strong as ever. They are currently second with 73.12 (39.68/33.44) points.

“We are happy with our skating tonight,” said Kavaguti. “I think it was one of our best performances. It has been difficult to be here after the Olympic Games, but we are happy to come to Turin for the World Championships. I really enjoyed skating for the audience. ”

Savchenko  and Szolkowy were the first to skate among the leading teams. Despite an enchanting and soulful interpretation of their choreography, the students of Ingo Steuer failed to make a bold statement with their performance as Szolkowy doubled his jump on the  side-by-side triple toe loops. The Germans were otherwise  clean, however with only 69.52 (36.12/33.40) points they will need to skater better in order to defend their title.

“Congratulations to the top two couples,” said Szolkowy at the press conference. “Needless to say, we are not happy with our performance tonight. I made a mistake and I’m very disappointed. I don’t know what happened. Of course we came here to win and we hope it will be still possible tomorrow. However, the most important thing is to skate well.”

Mukhortova and  Trankov are virtually tied with the Germans, however, the impression from two performances could not have been more different. While the defending champions totally devoted themselves to their choreography and the image they wanted to create, even in the face of obvious technical flaws the Russian team seemed to have trouble recovering from the weak showing at the Olympic Games.

The couple, which has been making a lot of progress in presentation this season, reverted to their old-time habit of concentrating on executing all the elements, and while the rapport between the partners has never been their strong suit, this time it was weak even by their own standards. Fortunately for the students of Oleg Vasiliev, they are simply too good as individual skaters, and the unison they have developed through the years of skating together made their Appasionata look elegant and stylish, if somewhat cold and aloof. The judges, however, were underwhelmed and their program components score was one of the lowest among the top teams. They are currently fourth with  69.48 (37.72/31.76) points.

“The judges graded two of our elements as level two, so probably that’s why [our scores are so low],” explained Mukhortova.

“You do the same elements and get different levels,” added Trankov. “We just wanted to prove to ourselves that we can do more than that. As for levels, we’ve got tired trying to analyze and change things every time.”

The only other top team to score an even lower ‘second’ mark were China’s Dan Zhang  and  Hao Zhang, who are almost tied with the Germans and the Russians with 69.20 (38.88/30.32) points. The team, which has been struggling with consistency all season long, skated a clean routine with a high level two triple twist, throw triple loop, and side-by-side triple Salchows, but even the comfort of returning to their old program to Piano Fantasy was not enough to allow the 2006 Olympic silver medalists to relax and simply enjoy performing for public. The music demanded power and command, which the students of Bin Yao were not able to match.

A notch below the top teams, USA’s Caydee Denney  and Jeremy Barrett posted a new personal best of 60.52 (35.72/24.80) points for the flawless execution of their Firebird short program. The team fearlessly attacked all their elements, but the amplitude and precision of their moves were not as good as that of the top teams and they received only a level one for their death spiral and step sequence. However, their triple twist received an impressive level three which allowed them  to compensate for the loss of the basic value.

The U.S. Champion’s choreography was well  thought-through and executed, with all elements perfectly distributed to match highlights in the music, and this made up  for the relative lack of refinement. Their obvious pleasure in performing so well, combined with the strong and powerful ending of the program, made their performance one of the most exciting of the evening.

“Heading into the Olympics, Jeremy had an injury,” explained Denney, “so we were kind of limited on some of the training that we were able to do. After the Olympics, we were really able to train and get back to our normal daily regimen. So we felt a lot more prepared for this competition.”

“The Olympics are such a big scale,” said Barrett about their improvement compared to performances in Vancouver. “We were happy to go there and to skate well, but coming here we wanted to come back and stay clean. As far as the levels, we got some good GOEs (Grade of
Execution). I think, we got a level one for the death spiral, but that is one of our hard elements for us. We got a level one for the footwork, I’m not sure why. But I thought overall our presentation was better and we executed all the elements really well.”

“Our Free Skate is the better of our two programs for us,” continued Barrett. “We have an easier time for some reason with that one. So we feel very secure with it. We’ve been doing good run through. We’re just looking forward to making sure that the last Free Skate of the year is a good one.”

Making their World Championships debut, Russia’s Vera Bazarova and Yuri Larionov also  delivered a clean routine. Despite better GOEs of some elements (including a level two triple twist), their more subdued program to Sadness did not have the same impact as the American’s powerful performance, and the team finished seventh with a new personal record of 59.78 (35.30/24.48) points.

“We did our job and we are very pleased with that,” commented Larionov. “We want to do our very best and again do what we came here to do. We went home from Vancouver on the 18th (of February). We had a few days off then started to practice again and we spent the last two weeks in a training camp in Novogorsk near Moscow. We made no changes to our programs, we just worked on the choreography.”

“We were very calm when we went out to skate and we did everything as planned,” added Bazarova. “Compared to the Olympic Games, we were less nervous.  It is the last competition of the season and we are a little tired.”

Skating last out of 25 teams, Canada’s Jessica Dubé and Bryce Davison failed to provide a strong finish to the first competitive day at the Championships. Dubé fell on her triple Salchow attempt, and the team came dangerously close to missing a triple twist. They are currently eighth with 59.36  (31.76/28.60) points.

“Tonight was not so good, but tomorrow we’ll try to show what we can do, ” promised Dubé. “We hope to create emotions for the audience in the Free Program.”

USA’s  Amanda Evora and Mark Ladwig skated a strong program to Portuguese Love Theme,  but their side-by-side triple toeloops were downgraded to doubles. Despite their energetic and inspired interpretation of their choreography, they are only ninth with 57.74   (32.74/25.00) points.

Rounding up the top ten are the French Champions Vanessa James  and  Yannick Bonheur (55.60). The team nailed their opening side-by-side triple Salchows, but later ran into problems with the triple twist.

A little further down the rankings, Stefania Berton made a successful transition from single to pair skating. The Italian, who competed in the Ladies event at the 2008 and 2009 European Championships (where she finished 13th and 16th, respectively) joined forces with Ondrej Hotarek. The team delivered a flawless routine to Caos Calmo, nailing their opening side-by-side triple toeloops and earned positive GOEs on all other elements except for the death spiral. They are currently sitting in the 11th place with 54.58 points.