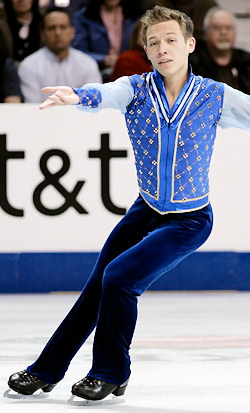 On the surface it seems as if Grant Hochstein is somewhat of a late bloomer in terms of his skating career.  At the ripe old age of 19, the 2009 U.S. Junior pewter medalist earned his first Grand Prix assignments on the junior level last fall, and was virtually unknown in the international community.

Hochstein might be considered one of the surprises of the 2009-10 season, qualifying for the Junior Grand Prix Final and following that up with being selected to represent the United States at the Junior World Championships last month in The Hague.

Hochstein’s story begins shortly after watching his idol, Michelle Kwan, skate at the 1998 Olympic Games.  At first his parents were hesitant to allow their son to get involved in the sport.

“It took a while to convince them to let me skate,” Hochstein said of his parents.  “They figured that I would be no good and get sick of it, so they let me try.  Boy were they wrong!”

Hochstein dedicated himself to his craft, and by the time he was fourteen, he had a full arsenal of triple jumps.  At the 2005 Midwestern Sectionals, he finished in first place in the novice men’s competition, and it appeared as if a medal at the U.S. Championships was on the horizon.

“Unfortunately, I injured myself during (this competition), and after Nationals I had to take almost an entire year off from jumping,” Hochstein shared. “It was then that I began to realize the importance of the other parts of skating. This past season was the first where I finally feel I am back to where I was before my injury 5 years ago.”

Hochstein debuted on the Junior Grand Prix in Hungary last August, and opened with a bang by winning the short program and winning the silver overall.  As a reward for earning a medal, Hochstein was assigned to a second competition in Germany where he finished in fourth, and earned a trip to the coveted Junior Grand Prix Final.

After a fifth place finish at the Junior Grand Prix Final, Hochstein headed to Spokane, Washington, to compete for the first time as a senior man.

“My goal for Nationals was to just go and skate well. I wanted to put out two solid programs so that I would be one of the ones to watch for the next four years,” Hochstein explained.  “I didn’t want to be intimidated by the Olympic contenders and I don’t feel like I ever was. I remained calm by focusing only on myself and my skating. I didn’t care what anybody else did, I skated for myself.”

Hochstein finished in seventh place in Spokane, earning a spot on the Junior Worlds team, and headed to the Netherlands as Team USA’s best hope for a medal in the men’s division.  In The Hague, Hochstein took the lead after the short program, and it appeared as if he would fulfill his promise with a podium finish in his first ISU Championships appearance.

“I did not expect to win the short,” Hochstein admitted.  “I expected to skate the way I did, absolutely, but to win was a dream come true.”

Hochstein faltered in the freeskate, and finished in fifth place overall.

“It was really difficult for me to finish off the podium,” Hochstein confessed.  “First off, my problem in my long was that I tried too hard. I’m so passionate about skating and I wanted it so badly that I couldn’t let myself skate. I got in the way of my own success. After, I was kind of in shock. I was okay with it all at first, but it hadn’t sunk in. I only had a little while to talk to my mom and (my coach) about it because they left the next morning very early.”

On the way home, the reality of what happened in The Hague hit Hochstein, and he knew that he had to take action.

“I had a nine and a half hour plane ride by myself back to Detroit,” Hochstein explained. “This was the first time I was able to actually think about what I had done. It finally sunk in. I had such a feeling of regret and disappointment and nobody to talk to about it. When I got back I immediately left for a show in Ohio. This was the first time I felt depressed and that I didn’t want to skate. I was on such a low from that long program that I didn’t know what to do with myself.”

Since then, Hochstein begin working with his sports psychologist. “She helped me a lot. I also have a great support system and amazing friends who have helped me through it. I’m now looking forward to the next season and being able to build on what I have accomplished this season.”

The set back was something that is now in Hochstein’s past, and he is full-heartedly working to accomplish a lofty list of goals in his skating future.

“I don’t plan on retiring for a long, long time,” Hochstein said with his trademark smile.  “We are still in the very basic planning steps for this coming season, but I’m hoping to push myself both technically and artistically. I’m going to have two triple Axels in the long and one in the short, and we are going to try to use music that isn’t as well known. It’s important to always try to push the envelope and do things that aren’t always comfortable to help me grow as a skater. As I had said before, I plan on being on the World team this season, regardless of who stays amateur.”

Currently ranked 33rd by the ISU and 38th on the 2009-10 season’s best list, Hochstein is eligible to skate on the Grand Prix in the fall season.

“It has been something I have dreamt about since I started skating, so to be invited would be incredible,” an excited Hochstein said of the possibility of competing on the Grand Prix circuit.  “I’m going to take with me the attitude that I am one of the best skaters in the world.  I have to believe it or nobody else will. I would love to not only be invited, but to medal as well. Competing on the junior circuit has taught me that I am worthy of success. I’ve experienced so many different things and it has helped me to grow into the athlete I am today.”

Hochstein also has high hopes that he will one day achieve his goal of competing in and winning an Olympic Games.

“I’m not picky if its 2014 or 2018, but I plan on competing in both.  I would like to leave a lasting impression for future generations, à la Michelle Kwan,” Hochstein declared rather seriously. “In the short term, I want to medal at the 2011 U.S. Championships and qualify for Worlds.  It’s a very ambitious goal, but if I set my mind to it and commit 150 per cent, I think it is definitely something I can accomplish.”

To reach these goals, Hochstein has surrounded himself with a strong team of coaches and trainers who will assist him on his journey.  Leading the way is his coach Lindsay O’Donoghue, a former national level competitor in ladies singles.  Maria Moscato, a UCLA-trained ballet instructor who has worked with such talents as Ryan Jahnke and Alissa Czisny, takes charge of Hochstein’s ballet training, while Jodie Tasich, a former international ice dance competitor, is responsible for Hochstein’s choreography.  Staying true to the lifestyle of a competitive figure skater, Hochstein also coaches some of his own students.

“A typical skating day begins at 2:30 PM,” Hochstein explained. “I skate for an hour and this is the session I get my lesson on. Then I have an off ice class- ballet, resistance training, or Pilates depending on the day. I will teach private lessons for an hour before getting back on the ice for another hour session. I usually leave the rink around 6:30. This is the routine Monday through Friday. Saturdays are my busy teaching day, but I manage to get an hour of ballet and an hour of skating in before three hours of teaching.”

Even as his own spotlight begins to get brighter, Hochstein still has time to pay homage to some of his own favorites from the skating world.

“I’m probably one of the biggest Michelle Kwan fans in the world,” Hochstein said of his idol.  “I guess one of my hobbies is watching skating videos of hers on YouTube. I think you can learn a lot by watching a skater of that caliber and studying the way they compete. I also am a huge fan of Dick Button. I met and shared a ride with him to the rink at the 2007 U.S. Championships. That was definitely the highlight of the competition for me. He was such an innovator during his competitive career and pushed the boundaries of the sport. I also think that skating just isn’t the same without his commentary.”

Hochstein’s favorite male skater is Alexei Yagudin. “He was brilliant at the 2002 Olympics. That is exactly how I want my Olympics to be. To be so prepared and be able to thrive when the moment came, I really admire that.”

“My education has always been something that I have valued,” Hochstein shared.  “I graduated from Anchor Bay High School in Fair Haven, Michigan in the top 11% of a class of 500. I’m planning on going to school part time in the fall. It was really difficult to manage a full load while traveling as much as I did this past year. I don’t want either school or skating to suffer, so going part time will be a good balance.”

Hochstein shares his love of skating with his sister, Veronica, who competes at the novice level, and has two other siblings- a brother, Nick, and a stepsister, Lauren. The international competitor has high praise for his mom Joyce, a department supervisor at a retail chain, and his step-father Rick, a project manager, who have given him the confidence to compete at such a high level.

“My mom has always supported me unconditionally. It was great for her to be able to go with me to Junior Worlds because she has never seen me compete internationally. Rick is also very supportive. He can’t sit at the rink for the hours on end like my mom does, but hey let’s face it, he’s a guy. It’s great to have my family support me and I wouldn’t be able to do what I do without them.”

Outside of the rink, Hochstein enjoys reading and ‘things that he can do in his hour-long car ride’ from his home in Allenton to the rink in St. Clair Shores.  But it is inside the rink where Hochstein is most invigorated.

“I enjoy singing, though it doesn’t always sound so good,” Hochstein admitted with a laugh.  “I have a great group of friends from the rink and a few from out of town with whom I talk on a regular basis. I’m trying to make myself sound exciting, but my real passion is skating.”