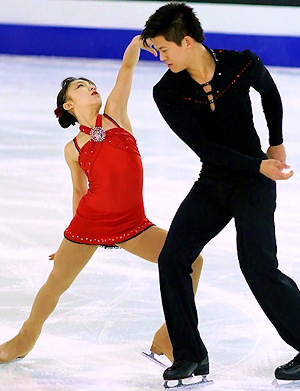 Narumi Takahashi, 18, and Mervin Tran, 19, are the second Japanese pair team to win a medal at an ISU Championships

Narumi Takahashi and Mervin Tran are the second Japanese pair team  to win a medal at an ISU Championships. The duo earned the silver medal at the 2010 World Junior Figure Championships in The Hague. The first Japanese pair was Yuko Kawaguchi with Russian partner Alexander Markuntsov,  who achieved the same at Junior Worlds nine years ago when Kawaguchi still represented Japan.

Similar to Kawaguchi, who is now is competing for Russia, has acquired Russian citizenship, and changed her name spelling to Kavaguti, Takahashi left Japan and teamed up with a foreigner to find success in pair skating.

Japan has had a lot of success in single skating in the past decade, however, pair and ice dance teams are sparse. The discipline doesn’t seem as popular as single skating, and lack of specialized coaches and ice time add to the problem. No pair skaters or ice dancers have yet taken the podium at an ISU senior level championship. Takahashi and Tran want to change that.

The Japanese-Canadian team has progressed rapidly. In what was their third season as a team, they won two medals in the Junior Grand Prix, went on to claim silver at the Junior Grand Final, as well as at Junior Worlds. In their debut at the Four Continents last January, they came in a respectable fifth.

Takahashi and Tran made a big step forward compared to their Junior Worlds debut in 2008, where they placed 15th, and compared to 2009, where they were ranked seventh. “Singles after a while all is training, training, training, you do the same things over and over,”  Tran pointed out. “Sometimes you don’t know how many hours you’ve put in, you don’t know if you’ve improved or not, while in pairs it seems like the more hours we put in, the more we improve.”

Takahashi followed in the footsteps of her older sister, who is currently  a member of the Japanese Synchronized team, when she started skating. Takahashi even trained as a child in the same rink and under the same coach as Yuko Kawaguchi, but doesn’t remember her as she was too young at that time.

Like many boys in Canada, Tran was put on to the ice by his parents to play hockey. “But at the hockey camp, the coach said that we need to learn to skate before we start playing hockey,” he recalled. “So we went into the “CanSkate” program that we have in Canada. After I did all the levels, I just started figure skating.” And  he stuck with it and skated singles in Saskatchewan.

Meanwhile, Takahashi moved to China when she was nine years old as her father started working there. She continued as a single skater, but soon discovered pairs. “I saw Xue Shen and Hongbo Zhao and other pairs,” she explained. “I liked them. Also, to do pairs in China has a very high status.”  She switched to pairs when she was 12 and skated for one year with a Chinese boy, Yu Gao.

However, in order to pursue her career, Takahashi and the Japanese Federation decided that she should move to Canada. “I knew that Richard (Gauthier) was a very good coach. He had Olympic Champions. I chose Canada because of Richard. The (Japanese) federation asked me ‘how about Richard’. I said, ‘I know that coach. Let’s find a partner in Canada,'” the lively skater summed up. She moved with her mom to Montreal in 2007.

Coach Gauthier took on Takahashi as a student and started to look for a partner with an Asian background for her. He asked Bruno Marcotte, who had coached in Vancouver for a few years, and Marcotte remembered Tran. “I used to compete against Bruno’s kids (students) and so when Bruno was driving to Montreal, he drove by Saskatchewan, and he thought of me,” said Tran. “So Bruno called my coach one day in March 2007 and asked if I wanted to do a tryout.” Tran was skeptical at first. “I didn’t really think about pairs at all. My coach said, ‘why don’t you go to Montreal, it should be a fun trip’. So we went and the tryout went very well. And now I’m here!” he laughed.

Takahashi remembered their first steps together on the ice. “The first day we did lifts, and I thought he was a genius because he lifted me very easily. He learned things so fast, and he was very kind, a gentleman. I couldn’t believe that kind of boy exists,” she noted.

“I was amazed about the things that we were able to do in such a short time from having no experience,” added Tran. “The coach said, ‘do a lift’ and she said, ‘alright’ and I was like ‘okay… I never have done a lift before’. We did most of the lifts. The tryout went for a week and we almost did everything. I just remember doing the first throw, a throw double, I got so excited. She said, let’s do a triple. I thought, wow, we did this much in one week, imagine how much we’d improve in like a year,” he continued.  “The first year together we went to Junior Worlds.”

For both partners, pair skating has become a passion. Takahashi stated at the press conference in The Hague that she is “addicted to it,” although it is a dangerous discipline and she has suffered some bad falls in the past. “Pair skating is not only jumps, it has other stuff. I’m short and I can go higher. When I’m tired in the morning practice, when I’m alone, it’s very tiring, but practice together is more fun,” she elaborated.

For Tran, the versatility of pairs makes the difference. “I loved doing singles, but singles is, you know, jumps and spins. You do pairs, you can also do that, you just have to do it with someone else. Dance is all about connection and skating with your partner. And (in) pairs you have to do the same thing. Pairs combines all that. The excitement I had from like the first throw that we ever did… I’m so excited, I’d never go away,” he explained.  The twist is the favorite element of both skaters, and they hope to add a triple twist to their repertoire soon.

In the past season, Takahashi and Tran left a strong impression, especially with their passionate Flamenco short program. “It’s one of my favorite programs we’ve done, that I’ve ever done, even by myself,” offered Tran. “There is more to it than just elements. When you see programs that are about elements, you get bored with it, but with this short program, the footwork, the steps in between… it was exciting. I had fun with it.” Tran said. “With this program, in practice sometimes the jumps were off, but when I hear the music I feel we can do it,” added Takahashi. “We did it clean almost every time.” The long program to Butterfly Lovers was also a very suitable choice that they used for two seasons.

However, both programs will be new for the upcoming season.  “Our coach thinks that we improved a lot this year and that we should start something new, fresh instead of coming out with the old stuff that we’ve already done,” said Tran. “He thinks we’ve improved so much and he just wants to start a new chapter.” Tran  revealed the planned music choice for next season: For the short, the team is going for a jazzy program to Feeling Good, while the  free program will be a romantic theme to The Day You’ll Love Me by Raul di Blasio.

The current World Junior silver medalists plan to compete at the senior level next year, but might come back to Junior Worlds. They are both excited about competing more at the senior level after gathering some experience at the World Team Trophy in 2009, as well as at the NHK Trophy and Four Continents last season.

“Every time we go to a senior competition, we improve a lot,” Takahashi stated. “One week of competition is worth two months of practice. And there is more audience!”  “The senior events are totally different – in atmosphere, feeling, mind,” noted Tran. “I always was told that from people in our rink and I didn’t really believe that. I was thinking, it’s just an extra lift in the program, but when you get there, when you see the other top teams of the world, they have their own presence of the ice. That’s where I want to get in my zone.”

After Junior Worlds, the team had a busy schedule in spite of not going to Worlds in Torino. Senior Worlds just wasn’t in their plan for the season from the beginning. Instead, Takahashi and Tran put together their new programs and went with coach Gauthier to the pair skating seminar in Berlin, Germany, in April. After that, Takahashi traveled to Japan as she was enrolled into university at the faculty of politic management. At the end of April she returned to Montreal and the couple finished the new programs before she went back to Japan for studying, while Tran had some time off.

On June 7, Tran will join his partner in Japan for a summer training of three weeks. Then the team will continue training in Montreal. Tran is currently taking a break from school. “The first year I went to school full time and it was just a lot,” he explained. “I’m thinking of going back next year or the year after. Right now I’m just skating and working during the week at a skate shop.” Takahashi plans to transfer to university in Montreal after the first semester in Japan to continue her studies.

The skaters get along very well, and during  their first year in Montreal, they even lived in the same apartment together  with their mothers. According to them, fights or disagreements rarely happen between them. “If we have a fight, our coach can solve the problem,” Takahashi said. “Like anyone, we have issues, but we always seem to work through it. There’ll be just random days where I’ll be a little tired or she’ll be a little tired, and we’re just short with each other. That’s the only time we have a fight,” Tran added.

The tiny Japanese has set ambitious goals for them, like winning the World title several times. It doesn’t seem to bother her too much that the couple most likely won’t be able to go to the Olympic Winter Games, at least not representing Japan. It is very difficult to receive Japanese citizenship. Tran not only would need to know the language very well but also would need to reside in the country.

Takahashi just switched her focus to winning Worlds and on learning difficult elements such as a quad throw or a side by side triple Lutz. Tran, on the other hand, doesn’t really know what to answer when asked where he sees himself in five years from now. “I don’t even know,” he laughed. “The thing is, five years ago, if you’d asked me the same question, it would not be this at all! It would probably be going to school in Saskatchewan and just coaching part-time and mainly focusing on school. And now, it’s been only three years and my life has been flipped upside down. Ever since, I’ve learned to take every year by one year at a time. I find I set really bad long-term goals. I just like to set short-term goals,” he said.