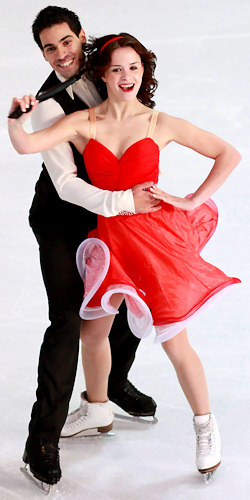 Anna Cappellini and Luca Lanotte of Italy put out a solid dance set to Que sera, sera and Girls, Girls, Girls at the 2010 Nebelhorn Trophy.

Anna Cappellini and Luca Lanotte of Italy danced to the lead in the Short Dance at the Nebelhorn Trophy in Oberstdorf, Germany, on Thursday. Russia’s Ekaterina Riazanova and Ilia Tkachenko came in second while top contenders Nathalie Pechalat and Fabian Bourzat of France had to settle for third place on the opening day of the competition.

The Italians earned a segment score of 59.86 points.

“We felt like we did really clean and elegant, in terms of skating like power in our legs,” Cappellini commented. “We feel we could do more and we’ve learned a lot more. We were not really able to express it (the dance) today, but it was ok. It is a stepping stone. We really just wanted to come out here and try this new short dance.”

Riazanova and Tkachenko had opted for the Waltz from The Snowstorm by Georgi Sviridov for their entire dance. The Russians looked especially strong in their confident Golden Waltz section, but heir side by side step sequence and their twizzles were also smooth. The last rotational lift, however, looked a little unattractive as he grabbed her leg and hurled her around. Overall, the dance looked very elegant. They picked up a level four for one Waltz section, the twizzles and the lift to post a score of 58.31 points.

“We feel pretty good about our dance and we didn’t expect to be so high in the standings,” Tkachenko said. “We always like to come here (to Oberstdorf) and skate here as the atmosphere is very welcoming.” “We skated much better here than at the (national) competition in Dmitirov last week and also better than at the test skate,” Riazanova added. “I think this was our best performance of the dance so far.”

Pechalat and Bourzat were obviously disappointed. Performing to the Waltz from the movie soundtrack of Amélie and a Tango, they started with excellent twizzles, but only received a level one for the first sequence of the Golden Waltz. The second sequence earned them a level four, but then again, the side by side steps were a level one again. The detailed choreography reflected the mood of the dance very well which gave them the highest program component scores, however, they lost too many points in the technical score and were third at 56.39 points.

“It is a shock,” admitted Pechalat. Partner Bourzat added, “”It is very hard. One lost level in the Golden Waltz can cost you up to four points. We need to check everything to know where we lost the points and see tomorrow.”

The French team had come without a coach. Coach Oleg Volkov, who was planning to come with them to Germany, didn’t receive his visa in time.