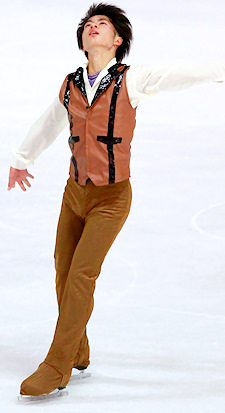 Tatsuki Machida of Japan performs to Legends of the Fall at the 2010 Nebelhorn Trophy.

Japan’s Tatsuki Machida took the gold at the Nebelhorn Trophy, the second international senior-level competition of his career, as the top favorites finished off the podium. Konstantin Menshov of Russia earned the silver medal, his first medal in a competition since 2007, and Peter Liebers of Germany captured the bronze. It was his second international podium finish after 2006 when he still was competing at the junior level.

Belgium’s Kevin van der Perren and Michal Březina from the Czech Republic, who were regarded as the top contenders prior to this event, finished fifth and seventh respectively.

Performing to Legends of the Fall, Machida nailed a quad toe right out of the gate and followed up with a triple Axel-triple toe and four more triple jumps. He only wobbled on the triple loop and stepped out of the landing of the second triple Axel. The 20-year-old picked up two level three and one level four for his spins and a level two for the straight line step sequence. His choreographed step sequence earned mostly a +1 grade of execution from the panel of judges. The Japanese defended his overnight lead with a total of 221.22 points.

“My goal for the season is to win medals at my Grand Prix events in China and Russia and to make the podium at Nationals,” he noted.

Menshov was the second skater of the day to land a quad in his Michael Jackson medley, and he added a double toe to his high quad toe, scoring 13.13 points for this combination. He went on to produce a triple toe, triple Lutz and three more triples. The only glitch came when he stumbled on the triple Axel. The 27-year-old from St. Petersburg collected 208.80 points.

“I skated well, although it felt hard to skate,” Menshov commented. “Overall I’m pleased with my skate, and if I had done the Axel it would have been great. To be honest, I was more nervous today than yesterday before the short. After all it is a new free program and you hold back because you don’t want to get tired too early. I have to work on my free program so that it feels easier to skate. This success here gives me confidence.”

Liebers pulled off a triple Axel-triple toeloop, a triple toe, triple Lutz and Salchow and also earned a level four for two of his spins. The German crashed on the second triple Axel and the triple loop was under-rotated. The 22-year-old skated to selections from the Sherlock Holmes movie soundtrack and showed a lot of improvement in the components sector. He was ranked fourth in the free skating like he was in the short, however it was enough to step on to the podium with 196.97 points.

“I’m very happy with the result,” offered Liebers. “I did a personal best score in both the short and free program in an international event. Obviously, the second Axel wasn’t there yet and I have room for another combination and the quad. I can do more and I’m looking forward to it.”

USA’s Armin Mahbanoozadeh put out a solid performance that included two triple Axels, but no triple-triple combination, to move up from eighth to fourth overall.

Van der Perren pulled off a big triple Axel and triple flip-triple toe-triple toe combo, but popped a loop and doubled the Salchow to slip from second to fifth.

Joey Russell crashed on his triple Axel but his triple flip-triple loop combination was rock solid. The Canadian remained in sixth overall.

Březina struggled during his An American in Paris long program, and doubled a few jumps including his planned quad Salchow that he hit in the warm up. He finished seventh.

“I started jumping only four days ago,” Březina confessed. He had suffered a groin injury. “I did only one run-through of my free program. Last year I did many run-throughs in practice, so when I came on the ice I didn’t have to think and everything went automatically.”