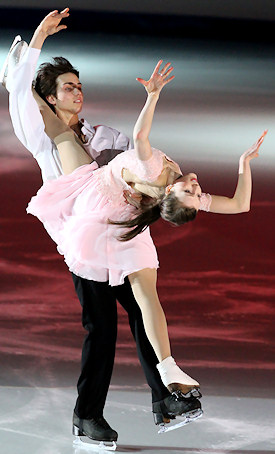 Canada's Alexandra Paul and Mitchell Islam perform to Eva Cassidy's Over the Rainbow at the 2010 World Junior Figure Skating Championships.

Immediately after the 2009 Canadian Figure Skating Championships, junior bronze medalist Alexandra Paul began to search for a new partner. Mitchell Islam, former Canadian Junior silver medalist and Junior Worlds competitor was searching for one of his own. Both skaters trained at the Mariposa School of Skating in Barrie, Ontario, so it only seemed natural for the two to give skating together a shot.

In February 2009, they had a try-out and the result was an instant partnership that has proven thus far to be a great decision.

“I had been looking for a partner for several months,” remembered the now twenty-year old Islam. “It took just one try out, and I knew that (Paul) and I were right for each other.”

Paul and Islam immediately began to prepare for their first competitive season together,  and entered the Minto Summer Skate in late July to test the waters. They edged out the reigning Canadian Junior Champions in the free dance, and won the competition overall, earning an invitation to skate on the Junior Grand Prix circuit.

In their first assignment in Poland, Paul and Islam nearly landed on the podium, finishing in fourth place by less than one point. The strong finish netted them a second assignment in Turkey one month later where they finished in a respectable fifth place.

“The Junior Grand Prix was an opportunity for us to just get better and to get some competition experience under our belts,” eighteen year-old Paul offered. “We were still learning how the other skates, so our main focus was what we needed to do to get better.”

After the Junior Grand Prix, encouraged by their strong results, Paul and Islam worked even harder, and pushed themselves even further in order to accomplish an ambitious laundry list of goals that they had set for the rest of the season.

“We set a goal to win the junior title at Canadians,” Islam said rather confidently. “We had both been on the podium before, so it wasn’t out of the realm of possibility. Coming away with the win made us both very happy.”

As Canadian Junior Champions, Paul and Islam were named to the Junior Worlds Team, and headed to The Hague with confidence and another goal to accomplish.

“We wanted to finish in the top five, and possibly win a medal,” Paul recounted.

Though Paul and Islam finished just fourteenth in the standings at the end of the Junior Grand Prix, they leapfrogged over many of the teams that ranked ahead of them in The Hague with much improved performances. In the end, the Canadian Champions came away with the silver medals defeating medalists from the previous season’s Championships as well as medalists from the Junior Grand Prix Final held in December.

“We were confident that we could finish in the top five based on what we learned on the Junior Grand Prix,” Islam admitted. “We knew that we had made a lot of progress since then, and knew that we were more competitive. It was a big surprise for everyone, and coming away with a medal was phenomenal.”

This season, Paul and Islam have decided to take their skating to the next level- the senior ranks both on the Grand Prix and at the Canadian Championships. The duo will make their debut on the Grand Prix circuit at Skate Canada, and have also been assigned to skate in the Rostelecom Cup in Russia in mid-November.

“We’re very excited to take this step,” Paul mentioned. “To be able to move up and make that transition so early in our careers is really exciting. We know that if a team is ready and skates well, then they can place well.”

Islam agreed, and appreciates the way that the scoring system rewards new teams for what they do on the ice.

“That’s what is great about our sport,” Islam interjected. “The way that the system is set up, the best teams are landing at the top. For us this season, we will compete with no expectations of placement. We will simply do the best that we can, and hope that we can make a splash. We are not expecting medals at all, but we will be at our best.”

Transitioning to the senior ranks can prove to be challenging, and this season adds a new dimension to that transition- the elimination of the compulsory and original dances in lieu of the new combined ‘short dance’. Paul and Islam are taking all of the changes in stride, however, and welcome the challenges of mastering something new.

“It’s not just us who have to adapt to the new format, it’s everyone,” Paul rightfully explained. “We did have to learn the Golden Waltz as part of the first section of the Short Dance, but I like learning new dances. It’s exciting.”

Her partner is intrigued by the change, and is looking forward to seeing how it all plays out.

“It’s going to be interesting to see how we all adapt,” Islam said curiously. “There’s a different spin on competing now that makes it very exciting. The compulsory section of the dance is really important, and for us it has been challenging but fun.”

Islam also realizes that the change isn’t just new for the skaters.

“It will be tough for everyone,” he admitted. “This is why everyone does club competitions so that both sides of the coin can be ready for the big events. All of the judges, technical officials, and coaches need to know how to handle the change, so it might be a little crazy for a while.”

In preparation for their 2010-11 international campaign, Paul and Islam entered and won the Figure Skating Boutique Summer Skate last month in Thornhill, Ontario. In the short dance, the duo netted 53.16 points, and earned a whopping 76.65 points in the free dance.

“Thornhill was a good starting point for us,” Islam explained. “We skated two decent programs for this particular point in the season. Mistakes were made, but we gave ourselves a good building block for the upcoming season.”

The duo just participated in Skate Canada’s High Performance Camp in Mississauga, Ontario, and found it to be quite helpful.

“The High Performance Camp was a success and everyone found it very beneficial,” Islam reported. We have some of the best judges and technical officials in the world right here in Canada and bringing them together with our best skaters benefits everyone. The feedback was incredibly helpful and I think everyone left Mississauga feeling like they had learned something.”

Paul and Islam have assembled a strong support team around them in Barrie in order to prepare them for their Grand Prix debut season.

“Our coaching team is made up of four coaches who share equal roles,” Islam offered.

This season Paul and Islam have selected a Spanish Waltz and a tango for their short dance choreographed by Porac, and will skate to As Time Goes By from Casa Blanca choreographed by former Worlds medalists Marie-France Dubreuil and Patrice Lauzon.

“We’re pretty invested in our new short dance,” Paul admitted. “It’s exciting, a lot of fun to do, and we look forward to competing it.”

“Working with Marie and Patchy has been a phenomenal experience for Alex and I.,” Islam said of working with Dubreiul and Lauzon. “We loved their skating style, the maturity and connection they had on the ice, and we’re hoping to emulate that with this free dance. We have such a good working relationship with them and the choreography process was a breeze.”

In the off-season, Paul and Islam focused on improving their basic skating, and have taken time to ensure that the quality of their elements has improved.

“We worked hard on making sure that our elements are more solid, and that they are of higher quality,” Paul proudly shared. “We are also paying more attention to the choreography in our programs, and focusing on the in-betweens to give our programs a well-rounded feel.”

Islam concurred, and added that their friendship off ice has improved their connection and their ability to perform a believable program.

“We hope to be appreciated and impress people,” Islam confessed. “This season we would like to make the World Team and make a splash. Long term, we want to go to the 2014 Olympic Games.”

Outside of the rink, Paul is equally ambitious, currently balancing university studies with her skating.

Paul lives with her parents Gordon, a radiologist, and her mother Anne, in Barrie. She has two sisters, Katharine, a university student, and Elizabeth, who is still in high school.

When she isn’t in class, studying, or training, Paul likes to take in activities that are seasonally appropriate.

“In the winter, I like to ski, and in the summer, I spend time at our cottage,” she admitted. “I also like to take dance classes in ballet and jazz.”

Beyond her competitive career, Paul can imagine still a future that includes figure skating, but has aspirations outside of the rink as well.

“I’m not sure where life will take me, but if I had to choose now, I would say that I would be involved in coaching, but I also would like to pursue a law degree.”

Islam comes from a family with a strong commitment to figure skating- his mother Debbie is a former Canadian ladies junior champion, senior bronze medalist, and was a judge on the men’s panel at the 2010 Olympic Games in Vancouver. His father David, in addition to being part of Paul and Islam’s coaching team, is the Director of (Ice) Dance at the Mariposa School of Skating in Barrie.

Islam has one sister, Rachel, who is a freshman at Middle Tennessee State University, where she earned a track and field scholarship. Over the summer, Rachel competed in and made the finals (800m) of the Canadian Junior Worlds Track and Field trials in Moncton, New Brunswick.

Islam has previously played AAA hockey, rep level lacrosse, and soccer, and like Paul, is a student at Laurentian University, and is leaning towards a degree in English.

“I really have no idea what I would like to do after skating,” he freely admitted. “Right now I would say that I am interested in journalism and sports broadcasting.”