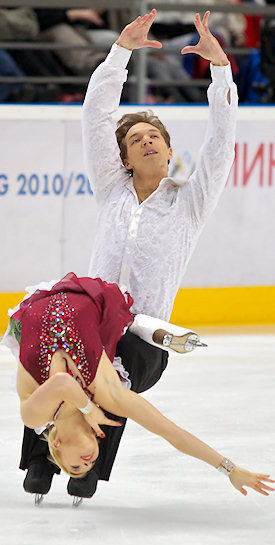 Ekaterina Bobrova and Dmitri Soloviev of Russia perform to Melody of the White Nights by Isaak Schwartz at Cup of Russia.

Injuries plagued ice dancing event at the 2010 Cup of Russia – even before the start of the competition. Sinead Kerr and John Kerr were scheduled to compete in Moscow, but had to withdrew after Sinead aggravated her shoulder injury.

The injuries continued to take their heavy toll on the participants. Eight teams competed in the short dance on Friday, but only five couples took part in the free dance.

The first two drop outs were Canada’s Alexandra Paul and Mitchell Islam, who had left the morning practice right after their music finished playing. Later in the day, Federica Faiella and Massimo Scali of Italy followed suit, and shortly before the start of the event, USA’s Madison Hubbell and Keiffer Hubbell also pulled out. All three teams cited the same reason for withdrawal: injuries of a partner which prevented them from executing lifts.

In a severely depleted field, Russia’s Ekaterina Bobrova and Dmitri Soloviev faced no serious opposition. The only thing the students of Svetlana Alexeeva and Elena Kustarova had to prove was the fact that could stay focused and solidify their position as the leaders of the national team. And they did it perfectly.

The Russian silver medalists provided a calm and lyrical conclusion to a disruptively short event. Their free dance to Melody of the White Nights , which flows nicely from one element to the next, will undoubtedly became even better later in the season.

The choice of style serves as a nice contrast to a much sharper short dance. As much as Tom Jones’ song highlights their power and energy, the touching melody by Isaak Schwartz brings forward the quality of their basic skating skills and the purity of their lines.

“First of all I would like thank everyone for the support,” said Bobrova. “It was really nice to skate at home and there was so much energy coming from the crowd that we could not help but give emotions back to them. Our next competition is the Grand Prix Final and we are happy that we have qualified for it. We set no goals in terms of placement, we just hope to skate two clean programs. There are still some things which have to be cleaned up and we still have to work on twizzles and other elements.”

The team admitted to being affected by the withdrawals. “We were very upset, we do know them well and it’s sad they all are ill and in pain. I wish them to get better quickly. As far as our performance, well, we just had less time to warm up before the start. We were not worried, we simply had to do things a bit faster, but it did not matter much.”

Hungary’s Nora Hoffman and Maxim Zavozin won the first ever Senior Grand Prix medal, a silver, with a fierce dance to Nagyidai Ciganok in which Hoffman portrays a witch. The couple, which trains in Odinstovo near Moscow, had one lift called a level three and the second step sequence a level two. Otherwise their routine was technically sound and maintained good momentum through the changes of style and tempo.

“It was a really big surprise that so many couples withdrew,” said Hoffman afterwards. “It was a bit confusing too. I thought I would have another hour to prepare. It’s the first time we have the medal in the senior Grand Prix and will be standing on the podium and it’s a silver, too. We were a bit nervous because our morning practice didn’t work so well, but we pushed it and we really enjoyed it.”

“Yes, we enjoyed it a lot,” agreed her partner. “It was a bit hard to skate because we had a tough experience at the morning training. We had to concentrate, to rebuild our self-confidence. It is an amazing feeling to be on the podium in Moscow in my hometown and the second home for Nora.”

Russia’s Elena Ilinykh and Nikita Katsalapov were able to recover the ground they lost yesterday, but despite getting great levels of difficulty and finishing second in the free dance, their score was only good enough for bronze.

The students of Alexander Zhulin have made a lot of changes to their Don Quixote since their first Grand Prix event in Japan, emphasizing the ballet character of the program, improving its flow and pacing, and replacing some lifts which did not quite fit the style with new ones.

“It was great to skate here,” said Katsalapov. “The support is huge compared to the other places. The energy of the audience was very positive and it was great. We are satisfied with our skate, it was ok. There is plenty of work to be done, but our main competition is the Nationals.”

“We changed almost half of the free dance after Japan,” added Ilinykh. “We did a new lift and it’s in a spread eagle which is something Nikita has never done before, so I have a lot of respect for him! I admire him for learning that in just one month. We’ll keep on working on improving the dance.”

The team was at loss to explain the mistakes they made in the short dance. “We honestly do not know,” said Katsalapov. “Things like this do happen. A couple of years ago, Charlie White managed to fall three times in the original dance, so it could happen.”

The main drawback for the young team was the lost chance to enjoy the dance by the Italians.

“We saw bits of Faiella and Scali’s dance during the practice, and we were very much looking forward to seeing it entirely,” said Nikita. “I really wanted to see that amazing program.”