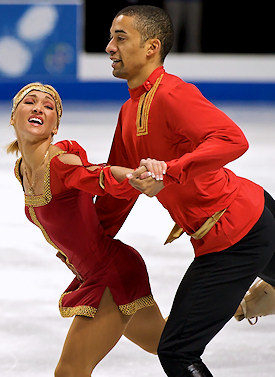 Germany's Aljona Savchenko and Robin Szolkowy from Germany took the lead in Pairs after their Short Program to Bond's Korobushko.

On Friday evening in Portland, Ore., two-time World Champions Aljona Savchenko and Robin Szolkowy from Germany escaped with the lead after the short program over the Canadian upstarts Kirsten Moore-Towers and Dylan Moscovitch.

With such impressive credentials in a field that lacks star power, the leaders were expected to dominate the field. However, with small mistakes throughout their program, Savchenko and Szolkowy lead by little more than two points heading into the deciding freeskate.

“We always want to skate our best, and that is not what we did tonight,” admitted the optimistic Szolkowy. “As we look forward to tomorrow, we will do better.”

The Germans are competing in their first competition of the season here, and admitted to feeling a bit rusty after waiting so long to debut. Their new short program to Bond’s Korobushko started out strong with a nice throw triple flip, but Savchenko doubled an attempted triple toe loop later in the program while her partner put his hand down on his triple.

“I had a lot of power going into the triple toe, and I think that it just kind of got away from me,” Savchenko said through an interpreter.

The program overall was an odd departure for the Olympic bronze medalists, lacking their usual inventiveness, and using somewhat contrived choreography. However, both skaters are committed to the vision of the program.

“When you choose music, it is always important to know what you feel about it and the timing of the piece,” said the Ukrainian-born Savchenko. “We wanted to do something different- something fast and this is what we have come up with.”

Savchenko and Szolkowy earned 63.99 points for the program- more than twelve points lower than their personal best.

Second place finishers Moore-Towers and Moscovitch perhaps skated the program of the night in the eyes of the crowd if not the judges. Since making their Grand Prix debut just two weeks ago, the Skate Canada silver medalists have rocketed into the spotlight as a team to watch for the next quadrennium. With a new personal best of 61.64 points, it would seem that Moore-Towers and Moscovitch could be heading to the Grand Prix Final next month in Beijing, China.

“We haven’t even let that creep into our minds,” Moore-Towers admitted matter-of-factly. “For us right now it is all about putting out good performances and building from one competition to the next. Our focus is finishing this competition strong.”

Moore-Towers and Moscovitch, skating to Zorba’s Dance performed with the confidence of a veteran team in just their second season together. A hand down on the triple toe loop by Moore-Towers was their only jarring error in an otherwise exciting program.

“We’re really happy with our program. All in all, we think that it was pretty much how we wanted to skate it,” Moscovitch admitted.

Moore-Towers continued, “We are always looking to improve from our previous performance, and we definitely took steps forward from Skate Canada.”

Sitting in third place are U.S. Champions Caydee Denney and Jeremy Barrett with 58.49 points, who skated a lyrical program to Love Theme from the Cousins soundtrack.

“We are pretty happy with how things went tonight,” Barrett shared. “There are still a few things that we need to work on so that we can score a bit higher on at (U.S.) Nationals, but overall from NHK until now, it was an improvement.”

The softness of the music doesn’t sit well on this highly technical team, but they are committed to using the program to develop a new dimension to their skating.

“We wanted to do something a little different this year, and (choreographer) David Wilson picked out this music for us because he thought it would help us grow as a team,” Barrett explained. “I think the program has come a long way in just the last few weeks, and since it is so different from our normal style, we still have some work to do on it. But by Nationals, I think that it will be pretty good.”

Junior Grand Prix Final qualifiers Wenjing Sui and Cong Han from China continued their incredible run this season with a fourth place finish here in Portland. After winning a gold and silver medal on the Junior circuit, the Junior World Champions harvested silver in their Grand Prix debut at last week’s Cup of China. A medal of any color here in Portland would likely earn them a trip to the Final on the senior level as well- the first team who would accomplish this feat in the history of the Grand Prix Series. Their score of 57.53 points keeps them within striking range of that milestone.