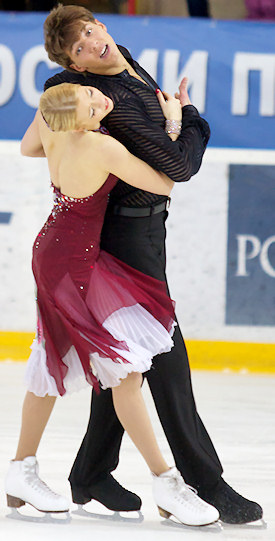 Ekaterina Bobrova and Dmitri Soloviev perform to Melodies of the White Night at the 2011 Russian Figure Skating Championships.

The decision to end the competition with the free dance provided an excellent conclusion to a strong and entertaining championships. The final flight catered to all kinds of tastes, and the fate of the title was not decided until the last competitor.

First to skate among leaders, Bobrova and Soloviev successfully delivered all required elements and enchanted the audience with the mesmerizing flow of their dance to Melody of White Nights. They were soft, lyrical and inspired, and impressed both the spectators and the technical panel with their skills. They received 99.95 (49.15/50.44) points and earned a level four on all elements except a step sequence (level three). With a score of 164.93 overall, they won their first national title.

“This victory is a big present for the New Year and it is a great honor for us,” said Soloviev. “It is always great to skate home.”

The skaters said that they could not quite explain what went wrong at the Grand Prix Final, but they now know what they have to work at.

“I always get upset then I make mistakes and it ruins the mood,” Soloviev explained. “This is something to work on. I know that people sometimes win despite making serious mistakes, so I should not let one affect the rest of the performance. We should only try to make other elements even better. Or better yet, avoid making mistakes in the first place.”

The team does not work with any sports psychologists.

“There might be something to the idea,” admitted Soloviev. “Things are usually going well in practice, but in competition in front of the audience, something happens and we make mistakes.”

The 2007 World Junior Champions said that at this point of their career they do not contribute to the choreography, but work together with the coaches on developing elements.

“Creating new lifts is collaborative process,” Soloviev stated. The coaches could not just tell us do this and that. It is a joint effort.”

They do not exclude possibility of working with outside choreographers in future.

“We would be very much interested in that,” Soloviev said, “Especially in learning modern dance. I saw some other skaters, like Daisuke Takahashi… how well he can control his entire body and it is amazing!”

The team takes the compliments they receive in stride.

“One should not pay attention to all those ‘you were great’s’, Soloviev lamented. “It is all very pleasant, but the moment you choose to believe it and rest on laurels is the moment you should as well quit.”

In contrast to Bobrova and Soloviev, Riazanova and Tkachenko were fast and passionate in their program to Mexico. The students of Alexei Gorshkov were also clean with only one level three for the final step sequence, and received a score of 98.28 (49.20/49.08) points to post the highest technical score of the night. They took the silver with 160.45 points overall.

“We are very happy to step up on the podium of the national Championships,” said Riazanova. “We have worked very hard towards this goal.”

The competition, however, was a serious challenge.

“The rivalry here was very strong,” admitted Riazanova. “I think all top three teams were nervous. It was the first time that three of us competed in one event.”

The possibility of failure did not even occur to them.

“We have really put so much work into the preparations that we refused to entertain any other thought,” stated Riazanova.

They are now going to the European Championships in Bern.

“We plan to have intense training sessions right after the New Year,” said Tkachenko. “So right now we are going to celebrate, then get into working mode, and then into fighting spirit before the Championships. There is not that much time left, though.”

Despite the eventual success this free dance was not their first choice.

“Before the start of the season we had another dance,” explained Tkachenko. “But at the test skates in August, the general opinion of both judges and other specialists, including Tatiana Tarasova, was that the dance was not good enough. So we went to Tarasova and listened to her musical suggestions and picked this one. It was hard to choreograph it so quickly, but now we believe that we have made the right choice. It is a better program. Stronger, both technically and emotionally.”

“In this dance I portray a Mexican girl, who is trying to seduce the guy,” said Riazanova explained about her role. “I tease him, make him flirt with me, but then push him away. We do have a happy ending, though.”

In real life however, they describe their relationships as ‘just very good friends’.

When asked to pick up which dance – short or free – that they like the most, the team was of the same opinion: “The waltz is more natural for us,” said Tkachenko. “The free dance is very powerful, very demanding, much harder to skate. Of course we enjoy doing easier things more.”

Jana Khokhlova and Fedor Andreev delivered a sensual routine to a Beatles medley. The new partnership highlighted a different side of Khokhlova’s character, replacing her previous power and exuberance with maturity and sophistication. The dance also earned good levels from the technical panel, but compared to the programs of other teams, it looked a bit more like an exhibition than a competitive routine.

However, the team has achieved stunning progress in just a few months, and earned loud ovations from the crowd for their intricate and well performed lifts. With a strong rapport between the partners, the partnership seems to be more promising than initially was thought. They scored 92.00 (46.49/45.51) points, and with 145.74 in total, pulled up to fourth place overall.

Ilinykh and Katsalapov failed to provide an optimistic ending to the event. Their program to Don Quixote was marred with a stumble out of a twizzle sequence by Katsalapov, as well as a few other ‘tight’ spots. The students of Alexander Zhulin received low levels of difficulty for their step sequences (both were rated level two), as well as two of their lifts. The rotational lift was graded a level three as the skaters did not meet the requirements for a ‘one-hand rotational lift’, and the second part of the combination was rated a level two.

Except for the stumble in the twizzle sequence, none of the mistakes were disruptive to the flow of the commanding and powerful program. Combined together, however, they resulted in a low technical store which pushed them down to fourth place in the free dance with 87.42 (38.65/48.77). They finished a distant third with 149.72 points overall.

“Of course I am upset about the mistakes,” said Katsalapov.

“However, overall we are happy about the performance,” added Ilinykh. “Yes, we had some mistakes, an obvious one on twizzles, but the judges also pointed out a few other less visible ones, but it only motivates us. But I think in terms of the big picture, it was the best performance for the season for us, so we are happy that we are able to improve from one event to the next in all aspects. Mistakes just do happen sometimes. Now we only have to work out some technical issues.”

“It is a great honor for us to win a Championships medal in our first season out of Juniors,” elaborated Katsalapov. “We also got a chance to represent Russian at the European Championships.”

“I was very nervous today,” admitted Ilinykh. “More nervous than in the short dance, but then we had a day off and almost the entire day today too. Of course I am always a bit nervous. It is normal, but today I was more nervous than usual – especially before the warm up.”

The team, which was criticized in the beginning of the season, explained that they are on a different schedule than the other teams.

“At the training camp in August other teams were already in their competitive shape and we have not yet reached it,” explained Katsalapov. “So naturally we looked worse than them and many people criticized us for it. But our coach has his own plan and his own ideas on how to bring us to optimal shape for the main events of the season. Judging from the fact that we improve from one event to the next, he made the right choice.”

The couple’s preparation for the National Championships has been handicapped by equipment issues.

“Before the start of the season, I got defective boots,” explained Ilinykh. “They broke apart during test skates in the summer, and I was forced to return to my old boots. But they were already worn out and were only getting worse. A few weeks before Nationals, I got a blister on one foot. I did not pay attention to it at first, but it got worse. I got a swelling which was so huge that I could not fit my feet into the boot any longer. I was off ice for almost a week and we only had four-five days of good practices before Nationals.”

She plans to break into new boots after the new year.

“I simply can no longer use these. They are very uncomfortable and they got a sort of weird shape.”

The team credits the success of their ballet dance to their choreographer, Ludmila Vlassova.

“She is a phenomenal choreographer,” said Ilinykh. “She used to be a soloist in Bolshoi. She danced in Don Quixote. Unfortunately she was not Kitri, but a street dancer. She was very happy about the way we skated today. For us it’s the highest compliment to know that the things we have worked on with her – lines, posture, spirit of the dance – were all strong.”

Ilinykh was also excited about her costume, which is a replication of a real ballet tutu.

“It is a real thing,” she said. “Only slightly smaller in diameter. The bodice is also an original corset. It was a bit painful to learn how to bend in it, but it was worth it. I am very happy that we decided to see the theme through and not to use a regular skating dress. I think it adds to the impression.”

Katsalapov said that it took a bit of time to get used to it, “but Elena also got a training tutu, so when we started working on the free dance in earnest, she always wore it and eventually we got used to the feeling.”

The team is hard pressed to pick up one favorite program of the recent ones.

“We are actors, we enjoy doing everything,” said Ilinykh. “I love Schindler’s List from last season. I like this season’s tango and waltz. It is passionate and powerful, which is very appealing. Of course, some things come easier. Others you have to work for, but I like all of them. I like versatility.”

Kristina Gorshkova and Vitali Butikov were fast, but out of control in their energetic dance to Latin tunes, and failed to impress the judges with the quality of their elements. They scored 76.77 (36.88/37.89) points, and with 142.83 in total, slipped to fifth place.

Angelina Telegina and Valentin Molotov rounded up the top six (123.83) with a passionate performance to Tango de Roxane.