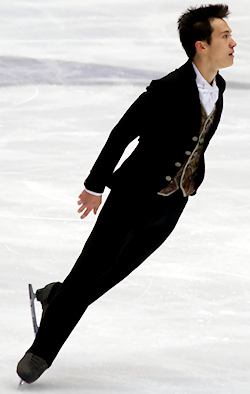 Patrick Chan of Canada performs to Phantasia by Andrew Lloyd Webber at the 2010-11 Grand Prix Final of Figure Skating.

The final part of the men’s competition today was not as good as their short program yesterday, however, it was still a very exciting event which featured a number of memorable performances.

Today, Chan was the only skater to successfully execute a quad toeloop, but the Canadian was not able to repeat yesterday’s success and stay on his feet throughout the entire program.

The student of Christy Krall badly stumbled out of his second triple Axel and later had a tough landing on triple Lutz to which he had only been able to add a double Salchow instead of a planned triple. His performance to Phantasia by Andrew Lloyd Webber featured four other clean triple jumps and earned him a new personal best of 174.16 points.

The strongest impression from the routine was the total command he was able to achieve on both the technical and presentation aspects, and the final choreographical step sequence was especially exciting.

“I’m very, very satisfied,” said Chan. “It is a big relief as I haven’t done a good short and long in a while so I am really happy. I was shocked to be in second after such a strong short, but I’m really pleased to do such a solid long.”

“It has always been a kind of dream for me to win a Grand Prix Final,” he added at the press conference. “The last two times were not so good. I finished fifth twice, but now I was finally able to put two good skates together. However, the most important thing is not the medal, but doing so well. It is a very big step in preparation for the World Championships. There’s more to come. I want to get comfortable putting quads in both programs in practice so I can do them in competition.”

The skater was happy that he was assigned to the event in China.

“It has been a phenomenal experience skating in China,” said Chan. “My parents are Chinese so I really enjoy being here and experiencing the culture since it is also part of my culture.”

“Besides,” the 19-year-old added, “Worlds are going to be in Tokyo this year, which is a long way from home. So I had a chance to try it out beforehand. It prepared me for competing in Asia. I am certain that the Japanese skaters will be very strong on the home ice and they will not make mistakes they have made today. But I hope that today’s experience will help me to improve as well.”

Kozuka delivered the second best performance of the night which was only marred by a slight underrotation of the opening quad toe loop and a shaky landing of a triple Lutz in combination with a triple toe loop. The student of Nobuo Sato has chosen Piano Concerto by Franz List for his long program, and the lyrical music highlighted his excellent basic skating skills and lines throughout all four and half minutes of the program.

Kozuka’s step sequences in particular were very strong, with effortlessly maintained flow and speed. It was a mesmerizing performance which would have been enough to win a event of any level, but it lacked the projection displayed by Chan. He finished a distant second in the long with 159.89 points with a lion share of the gap being due to the difference in the program components score.

“It wasn’t a great nor a bad performance, it was okay,” said the 23-year-old. “Honestly, I am tired after Paris. It’s only been two weeks after the competition. I just couldn’t recover well enough and I had a jet lag. But I’m not the only one affected. Other skaters are in the same situation, so no complaints. I’d like to brush up my details and train harder and harder.”

Kozuka, who collided with teammate Daisuke Takahashi at morning practice, said that he feels guilty about it.

“I apologized to him and he accepted the apology with a smile and claimed that he was not in pain,” he said, “but I still feel awful about it. I promised him and his coach that it will never happen again.”

Oda finished third in the long program. The overnight leader fell on an underrotated quad toe loop, but recovered to deliver eight clean triple jumps -including two triple Axels. However, he slipped off the edge after his final double Axel and was forced to miss almost half of his second step sequence. Luckily for the skater, this year the element does not earn any levels, so the mistake only cost him points in the grade of execution.

Unlike Oda’s impressive short program, the lyrical long to Piano Concerto by Grieg does not suit him all that well. The student of Lee Barkell seems to find it easier to keep speed and momentum than to pay close attention to his lines which is required by classical music. He earned 156.22 and won the third silver medal of the season.

“I am not satisfied with my performance, I fell twice,” he said. “For the Axel, my blade got stuck in the ice and then I fell behind the music.”

Tomas Verner of the Czech Republic finished fourth in the free skating, but remained fifth overall. He popped an opening quad toe loop into triple.

“I just didn’t have enough speed going into it,” he explained. “The timing was not there, but I was glad I could make it a triple and not just a single.”

He was almost clean otherwise, and nailed two triple Axels (a jump he missed in the short program). However, the Czech skater seems to still be adjusting to a new training regiment and being back in competition again. His routine to a Michael Jackson Medley lacked his customary flair, and his dancing skills only emerged during two step sequence. Still, it was a much better effort overall than his performances last season, and he earned 148.27 points.

“I never expected to be in the final,” said the student of Robert Emerson. “I didn’t have the best preparation, but I’m happy with my skates.”

France’s Florent Amodio opened the competition with another routine to Michael Jackson music which also featured two triple Axels and five more triples, but unfortunately his attempts to express the character were mostly limited to dancing on one spot during the rest stops. In addition, there were hardly any challenging connecting moves in his program.

“My score was not as good as when I was at Bompard or NHK, but I did a good free skating program,” said the student of Nikolai Morozov. “It was difficult for me because after the short program as I was disappointed. But I am happy to have this kind of experience because I grow at every competition and that is part of figure skating. The Nationals in France are next week. I am already very tired after Bompard last week and this event, but I am hoping to be French Champion again. ”

Japan’s Daisuke Takahashi once again entertained the audience. In terms of connection with audience, it was by far the best of night, but the reigning World Champion made mistakes on the majority of his jumping passes.

He two-footed his landing on a quad flip in the beginning of the program, but recovered to nail a triple Axel and triple loop. A triple toe in combination with a triple flip was downgraded to a double, and he fell on the second triple Axel and his second triple Lutz. Two of his spins received only a level one. With the worst technical score of the night (58.20 compared to 70.40 for Amodio), he finished sixth in the long program (137.20), slipping to fourth place in the overall standings.

“I was disappointed with myself because I couldn’t show what I have been training,” he told the press. “I was well prepared but I didn’t do my best here. It was a good challenging experience to try the quad flip instead of the quad toe at the competition. I had a good feeling about it. Even though the Nationals are in just two weeks, I’d like to have more consistency for the quad jumps.”