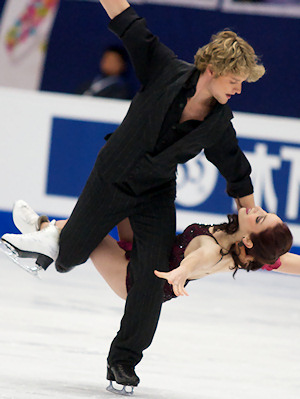 USA's Meryl Davis and Charlie White perform a tango for their Free Dance at the 2010-11 Grand Prix Final of Figure Skating.

USA’s Meryl Davis and Charlie White won their second consecutive title (171.58), while Nathalie Pechalat and Fabian Bourzat of France upgraded to a silver (171.58) from last year. Canada’s Vanessa Crone and Paul Poirier moved up from fifth place to capture the bronze (139.74).

After unexpected results of the Short Dance, things fell back into place in the Free Dance competition on Saturday.

After Tessa Virtue and Scott Moir of Canada announced their withdrawal from the Grand Prix series, there was a little doubt that World and Olympic silver medalists Davis and White would be able to defend their title.

However, after an uncharacteristic weak showing at Skate America, the team suddenly started to look slightly less unreachable for other top competitors. Relatively close results between the top two teams in the short dance only reinforced this notion.

The students of Igor Shpilband and Marina Zueva proved to be excellent competitors, however. They delivered exactly what they had to deliver – a powerful and flawless routine in which every element exceeded the requirements. As the result, they earned a level four on all of elements (except for a level 3 diagonal step sequence) as well as excellent grades of execution.

“We felt really good and confident today and are happy with the way that our program has built up throughout the season,” said Davis.

Their tango earned them a season’s best of 102.97 points (the only score over the 100-benchmark posted this evening), but there is still room for improvement before the main events of the season. Despite intricate and complex choreography, which the U.S. Champions were able to execute smoothly, the emotional connection between the partners was not consistent enough.

“It feels great to receive a season’s best,” said White. “We’re being rewarded for the skates that we’ve done and the hard work we’ve put in.  We’ve still got a lot to improve in our program before nationals and worlds, though.”

“We had a late start but now that we are where we are, we can start building on that,” explained Davis. “We achieved something we have aimed for and we can be proud of the performance. Winning the second title made it all the more sweeter.”

The skaters admit that the dance is a “work in progress” at the moment. They started to put the program together with professional tango dancers.

“The most challenging part was to adapt it to the ice,” said White. “There are so many things which are done on just one spot and we needed a lot of speed and flow, so it was difficult to translate it.”

Pechalat and Bourzat once again provided a perfect contrast to their rivals. What the Americans lacked in their dance, the French had in spades. The highlight of their Charlie Chaplin free dance were not the required elements, which were all very good, but the almost palpable connection between the partners.

The skaters have mostly been known for abstract and complex free dances in the past. This year, they came up with two programs which, while still very difficult, are also perhaps the most touching of all presented this season. The students of Alexander Zhulin had both their step sequence called a level three, however, the rest of the elements received a level four and they also improved their personal best to 96.44.

“We did a pretty good job today,” said Bourzat. “I was tired by the end of the free dance, but it is something that can be easily fixed before Europeans and Worlds.”

“Because of Fabian’s inflammation we cannot stay more than two hours on the ice,” explained Pechalat. “We lived with that for one month and now we need to take a rest. Then we will work harder after the break.”

Before that break, however, the skaters still have to compete at French Nationals next weekend.

“It [the tight schedule] is not an issue. This year we had competitions every other week,” joked Pechalat.

“We are hoping to improve our season’s best at Nationals,” added her partner, “but we have no time to prepare.”

Vanessa Crone and Paul Poirier of Canada were able to put aside the disappointing result in the short dance and deliver a clean program in which only one element, the opening spin, received a level two.

“We failed to get the level we wanted yesterday, but there was nothing to be done about it,” explained Poirier. “So we just focused on skating a good free dance today.”

In contrast to the more outgoing programs by their rivals, the sophisticated dance created by Christopher Dean put a lot of pressure on the young team to skate clean. They were up to the task here in Beijing.

“That was our best performance this season,” said Crone. “We went out there to push ourselves to the limit and we have bettered ourselves and our skate. I feel that over the last couple of competitions, our confidence has blossomed and we will keep pushing towards Nationals.”

“Winning a medal here is a step in the right direction,” added Poirier.”We could not have skated it better today.”

Despite making a mistake on twizzles and receiving a level two on a lift, Russia’s Ekaterina Bobrova and Dmitri Soloviev were able to pull up to the fourth place with 82.42 points for the free dance and 136.75 points in total. The skaters avoided further mistakes and were appropriately smooth and subdued throughout their dance to Melody of the White Nights by Isaak Schwartz, however, their performance lacked the magic they displayed at Cup of Russia.

“There is no explanation for my mistake,” said Soloviev of the twizzles. “Something just happened and they fell apart. We’ve lost quite a few points.. also on the first lift. I think we’ll just have to work harder, otherwise we won’t achieve better results.”

The skaters do not believe that their performance was affected by the fact that it was their first Grand Prix Final.

“Actually it was less tense than I thought it would be. It just was another competition and not our best one,” explained Soloviev.

“We’ll take a step back and have a look at everything now when we get back home,” added Bobrova.

Kaitlyn Weaver Andrew Poje of Canada slipped to fifth place overall despite a strong performance to Moulin Rouge. Both their step sequences were called a level two and one of the lifts received only a level three, but the Canadians were able to impress the audience with their elaborate transitions, lift entrances, and challenging lifts themselves. They scored 80.83 and had 136.34 points in total.

“Of course we’re disappointed in the scores,” said Poje, “but we don’t feel like we have anything to be ashamed of. We worked so hard after Skate America, so it is obviously disappointing to get a worse score here. Our aim was just to get here. We’re only half way through the season, so this is just a stepping stone to Nationals. Today’s skate had some elements that were downgraded, so we have more to work on.”

Hungarians Nora Hoffman and Maxim Zavozin finished a distant sixth with their performance, which, in a roundabout way, was appropriately wild for the dance called Gypsy Witch. While they avoided serious mistakes, they had a few close calls during the routine.

“Even though I felt the pressure we really wanted to skate well,” said Hoffman. “We got a little tired and we had a lot of shaky elements today, and  think we lost a lot of points because of the shaky elements – especially when Maxim tripped. It looked heavy in the end. We still have to work to make it better. I think the beginning was good, but then it went downhill today. I wish we would have done better, but it was not our best program today.”