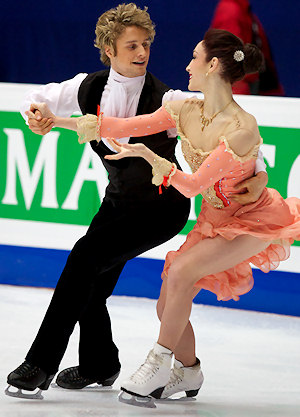 Ice dancing continues to be the most surprising event of the Grand Prix Finals. While the fact that Davis/White and Pechalat/Bourzat would be the top two teams after the short dance was evident long before the competition barring mistakes, hardly anyone could have envisioned that third would go to last place qualifiers Hoffman and Zavozin from Hungary.

Nonetheless, the Hungarians managed to edge out more decorated competitors.

Davis and White, who skated last, delivered an arresting program to waltzes from La Boheme and La Traviata. The team from Canton began the dance with their trademark twizzles, which were not as good as they could have been, and gained rather modest grades of execution. However, after the side-by-step sequence, they picked up the pace as the music changed to La Traviata and they set to a familiar Golden Waltz pattern.

“It was good, but not great,” said White about their performance.”Shaky twizzles on my part. We need a little more speed.”

Davis and White were finally able to secure a level four for both sequences of the pattern dance.

“We got the levels we were looking for,” said White, “but we still can improve on the level three in the side by side footwork. But basically, we are already focusing on the free dance tomorrow.”

The students of Igor Shpilband and Marina Zueva admit that the hardest part of choreographing a short dance was to understand what exactly is required from them.

“It is already the second program we have choreographed this year,” explained Davis. “For us, the most challenging part has been to grasp a concept of the dance. We did one version and tried to understand what people are looking forward for, especially the officials. It is still work in progress, but as the season goes on, it is getting better. It has been hard to incorporate the compulsory dance into it, but basically the hardest thing was the concept.”

In contrast to the outgoing and commanding performance by the Americans, Pechalat and Bourzat skated a soft and sensual waltz to music from the soundtrack Dr. Zhivago. For the students of Alexander Zhulin, it is also the second attempt to choreograph the program.

“The first one was not a success,” explained Bourzat. “We have tried to listen to what everyone told us about it and use it for the new version. It was hard to do the dance in such a short time, but I am happy that we have been able to figure something out before the end of the season.”

The new version suited the French team perfectly, with everything from costumes to their choice of style, capitalizing on their strengths and strong rapport between the skaters. On the technical side, however, they only earned a level three for one of the Golden Waltz sequences and midline step sequence. However, they did improve their season best, and finished a close second with 65.66 points.

“Our goal has been to improve our season best and we did it,” said Pechalat. “It was clean, with strong emotions, so we are very happy about the performance.”

“The elements were good and we feel we skated well,” her partner agreed. “We will see what happens tomorrow. Our levels are ok, but we still have space to improve.”

The team was hindered by Bourzat’s health problems.

“I was not injured,” he explained, “but I have a little trouble with my leg and it can be painful. So I do a lot of physiotherapy and we try to do short practices.”

At the 2010 Cup of Russia in Moscow, Hoffmann and Zavozin were very excited to win their first Grand Prix medals (silver) and had a chance to speak to the press at the post-event press conferences – something they have not done since their Junior years. In Beijing, Hoffman summed up their feelings by short.

“We are in shock,” she stated.

They were the first ones to skate, and while they they had strong material and were clean (except for slightly shaky change of positions during twizzle sequence), the score of 55.98 was below even their personal best. However, one by one, higher ranked skaters made mistakes and finished below the students of Alexei Gorshkov.

“We had only learned that we are going to the Grand Prix Final one week ago,” exclaimed Hoffman. “We are really really happy and excited to be here and to finish third. Of course the competition for third to sixth place is very tight, but we are so happy to just to be here.”

“It was a bit hard for me to skate today, maybe because of the time change,” she added. “I made little mistakes here and there, but hopefully no one but me noticed them.”

For the them, the hardest part of the new dance was to pick up the right music.

“We had to pick up the right music for the Golden Waltz,” explained Hoffman. “We have tried various things and we thought about what other teams would do – especially since it is not only the waltz, but the tango and quickstep were also possible. But we ended up with classical music because it felt right. We have tried doing [the Golden Waltz] to modern music, but it did not work. However, once we had picked up the music, things developed naturally from there.”

Kaitlyn Weaver and Andrew Poje are less than half a point behind the Hungarians (55.51), but for the Canadians, this negligible difference means that they are out of the final flight for the free dance.

The NHK Trophy silver medalist began strong, getting a lot of applause for their impressive straightline lift. They have done a remarkable job adjusting to the Golden Waltz to fit to At Last by Etta James without sacrificing its technical accuracy (they were the second team to receive a level four for both sequences). However, Weaver stepped out of the first twizzle in sequence and they only received a level two (and negative grades of execution) for the element. The mistake outweighed the excellent choreography of their program, and they had to settle for fourth place.

“It is an amazing feeling to be in the top six and to be here,” said Poje. “We worked really hard and our goal was to be part of this competition, so we have already achieved what we wanted.”

“We are very pleased we got level 4 for both waltz sequences,” added Weaver, “but I did miss my twizzle, which I never do. But I think we have a  lot of potential for the future.”

Since their last competition at Skate America in Portland, the team mostly worked on their free dance.

“It was our weak point,” admitted Weaver, “but we went home and worked hard to increase our point value. We made some changes to the choreography which work well.”

Teammates Vanessa Crone and Paul Poirier skated an interesting program to Alicia Keys’ Fallin’, which immediately grabbed the audience’s attention with an innovative and risky upside down lift. This element, however, was the only one which worked as planned. Even though the team did not make any noticeable mistakes, their levels of difficulty left much to be desired as they only earned levels two and three for the remaining elements. Otherwise it was a strong skate which highlighted how far the team has progressed since their first participation in the Grand Prix Final last year. They received a score of 54.82 and are still in contention for the bronze medal.

“We did not have any expectations in terms of placement here,” said Poirier. “We want to improve with every competition and prepare for Nationals and Worlds.”

“The Chinese spectators are awesome,” said Crone. “They gave us a lot of support. We are disappointed with our scores, but we are not just skating for points. We focused on what we have to do.”

Sitting last after the first part of the competition with 54.33 points are Russia’s Ekaterina Bobrova and Dmitri Soloviev. Soloviev struggled to keep his balance on the opening twizzle sequence which was downgraded to level two with negative grades of execution. The team also also only received a level three for the Golden Waltz patterns. Their music choice to Tom Jones’ Delilah appeared to be a bit overpowered as they skating fast with great flow, but left the impression of falling behind it.

“I was too calm and overconfident and that probably led to the mistake on the twizzle,” explained Soloviev. “The practice had gone very well. This is our first senior level Grand Prix Final and I think it is a very important step for us to have qualified. For tomorrow we want to focus and take it step by step, skate with a cool head, and don’t think too much.”