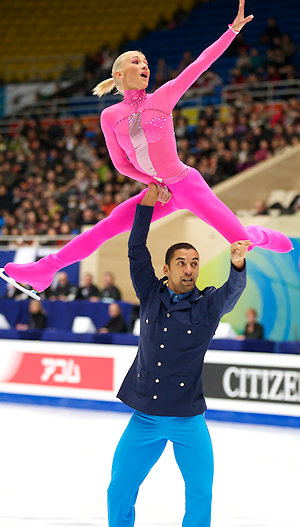 Aljona Savchenko and Robin Szolkowy of Germany won the Pairs event by over 20 points at the 2010-11 Grand Prix Final of Figure Skating.

The 2010 Grand Prix Final concluded with the Pairs Long Program, which added another two medals to the host country’s collection.

Aljona Savchenko and Robin Szolkowy of Germany easily defended their overnight lead to win the title (210.72). China’s Qing Pang and Jian Tong remained in second overall (189.93), while teammates Wenjing Sui and Cong Han pulled up to win the bronze medal (179.04).

Skating to Pink Panther and getting fully into the playful character of the music right from the start, the students of Ingo Steuer opened their routine with a powerful throw triple flip, and went on to land a sequence of two triple toe loops. Later in the program they made a mistake on a jump (Savchenko doubled her Salchow), however, the non-disruptive error did not distract from their highly entertaining and yet, commanding performance.

The Germans, who said that they wanted to show a new side of their personalities this season, picked up a risky theme for their free skating. The crowd-pleasing music requires warm support from the audience, but it requires a lot of skill to be able to pull it off without looking silly or childish. The Germans, however, were up to the task, and received 136.32 points and strengthened their overnight lead.

“We are very happy and excited to have skated the way we did today,” said Savchenko. “To have won the Final in China is the icing on the cake. This is the first step towards the big championships for us.”

“We are very pleased as we were able to improve from one competition to the next,” added Szolkowy. “We got a high score yesterday and today again, so we are on the right track. So far, so good, but there are still some elements that we can improve.”

When asked about the high level of competition in the Final, the skaters admitted that they did not have many chances to watch other teams skating in Beijing, but added that “It is always good when you have young couples coming up, improving their level and fighting with us”.

“As long as we sit here in the middle everything is ok,” joked Szolkowy, referring to the center seats the winners take during the press conference.

Pang and Tong, who have shown a lot of improvement since last season, managed to up the level once again this year. While technically their performance to Liebestraum was rather disappointing, the rapport between the skaters and their commitment to all parts of their choreography have never been better. However, with costly mistakes on both jumping passes (Tong singled his Axel, while Pang doubled the toe) and a pair combination spin which received no value, they were unable to challenge the Germans for the title.

“We were very disappointed and dissatisfied,” said Tong afterwards, “because our short program score was low and we were disappointed yesterday and we didn’t get much sleep last night, thinking it over. So today we only paid attention to the elements and we lacked speed and choreography. Today was very difficult. There is a lot more pressure skating in China. The audience has very high expectations and we really want to skate our best for our fans.”

“There is a new transition into the triple toe loop and I just didn’t do it well,” explained Pang.

The skaters were, however, at a loss to explain why they did not receive any points for the pair spin.

Teammates Sui and Han made two serious mistakes in their charismatic Charlie Chaplin routine, but benefited from a lot of high based values of their program, which featured a throw quad Salchow attempt. Sui double-footed its landing and later fell on her triple toe loop, but the rest of the elements were well done and the enthusiastic support from the home crowd carried the young team all the way through their performance.

“We were disappointed with the mistake on the quad throw,” said Han. “We did it so well in practice every time, but today we made a mistake. We had some other mistakes, too. We can do better. The spectators and the circumstances are different in seniors and we’re not used to it.”

“We like to just focus on ourselves, but of course the experience of competing against top teams is good and we can learn from the other skaters,” Han added. “It was our first time at such a big event and in front of home crowd, too. We made the podium, which is something we did not expect, but now we are really excited about it. We approached this competition trying to do things just like we do them in practice, and seeing the scores of the German and the Chinese teams only motivates us to work harder.”

Russia’s Lubov Iliushechkina and Nodari Maisuradze also pulled one spot up. The highlights of their program to Conquest of Paradise were solid side by side jumps and a level three triple twist, but Iliushechkina two-footed the landing of a throw triple Lutz, and the students of Natalia Pavlova were once again unable to secure maximum levels for their non-jumping elements.

The complexity of their choreography seem to be too much for the team, as they had to rush through some parts of it in order to match the music, and they often failed to hold positions long enough to meet the requirements for the levels. Still, they have been able to improve their personal best to 117.38 and 177.44.

“Today we feel better about our performance (than in the short program),” said Iliushechkina “I’m glad that we did what we had to do.”

Teammates Vera Bazarova and Yuri Larionov were unable to hold onto their third place finish in the short program. Their performance to The Man in the Iron Mask soundtrack showed a new, more powerful style and better attack and presence than ever before, but the skaters missed both jumping passes to slip to fifth place overall with 176.80 points.

Canada’s Kirsten Moore-Towers and Dylan Moscovitch remained sixth with a sound performance to Les Miserables, which unfortunately lacked the impact of other skaters’ routines.

“We both had a really good time even though there was a bit of a glitch on my side in that long program,” said Moore-Towers, who fell on a triple Salchow, “but it’s a stepping stone for us. We are very lucky to be here and we are embracing and enjoying it.”