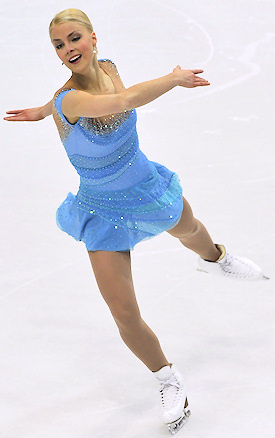 Kiira Korpi is the current leader after the short program at the 2011 European Figure Skating Championships.

Korpi put out a delightful performance of her program to The Wizard of Oz. She hit a solid triple toe-triple toe combination, a triple loop and a double Axel. The flying sit spin and the combination spin merited a level four, while the layback was a level three and the footwork a level two. Korpi picked up a seasons best with 63.50 points.

“I expected a clean program because I have been doing really well this season and as well in practice,” the Finn commented. “I am happy to have done a clean performance, although I was nervous. But I kept my focus.”

“It was my goal to be in first place,” she continued. “I knew it was possible if I do a clean program. I’m trying to focus on my job tomorrow. I know it is always different when you are leading, but I have a good experience from Paris (Grand Prix Trophée Bompard) where I was also in the lead.”

Makarova flirted with the sparse crowd in her Flamenco routine, and the technical content was strong as well. The former Russian Champion reeled off the same jumps as Korpi and had the same levels for her spins, but her footwork garnered a level three. Makarova scored a seasons best of 60.35 points.

“I am very happy with my performance. I had had fun,” Makarova said. “I knew I enjoyed it because at the end, the audience did. As long as everyone is happy so am I. I don’t recommend to lose, but starting here being fifth at the Nationals somehow took the pressure off me. I felt very confident and strong on the ice.”

Makarova’s recent coaching change from Viktor Petrenko to Evgeni Rukavitsin and moving back to St. Petersburg for training apparently paid off.

“Part of it was because the Europeans were coming up so fast and (former coach) Viktor (Petrenko) couldn’t stay in Russia because he also has students in America. I didn’t want to have adapt going back to the States and then again going back to Russia. It would have been too much for me, so I ended up staying in Russia and I will continue to stay on in Russia.”

Not many people would have placed bets on Meier as she had missed all season so far after suffering a foot injury at Skate Canada last fall. However, the 26-year-old surprised with a clean performance on home ice to Samba para una sola nota. She landed a triple Lutz-double toe, a triple Salchow, a double Axel, and picked up a level four for two spins to score 58.56 points.

“I didn’t expect this,” the two-time European silver medalist told the post-event press conference. “My goal was to skate a clean program. I was focusing on my skating and I was not thinking about my placement. I didn’t come here with many expectations because my season hasn’t been going well. This was my first competition and the first time I showed my short program.”

Viktoria Helgesson of Sweden gave a solid performance to This Is England that featured a triple flip-double toe, a triple loop, a double Axel, and nice spins. She scored 54.70 points.

“I am really pleased with the performance,” the 22-year-old said. “It went well. A highlight for me was doing all the jumps well. My goal for this competition is to skate two clean programs.”

2010 European bronze medalist Elene Gedevanishvili stayed in contention for the podium as well. The Georgian nailed a triple Lutz-double toe combo and a triple toe, but had to fight for the landing of the double Axel and her layback was only a level one. She earned 53.68 points.

“It wasn’t as good as I could have done,” the 21-year-old admitted. “I was fighting until the end. I don’t know how I held on to the Axel, I was hanging on air. Doing the layback spin, my feet were hurting and I was barely hanging on. My goal for the rest of the competition is to skate a good free program. Winning a medal would mean a lot, not only for my country, but also for me as well as my coach who inspires me. It would prove that I can do it again.”

Defending European Champion Carolina Kostner struggled in her beautiful Flamenco routine. She crashed on the back end of her triple toe-triple toe combo and the second jump was underrotated and she also fell on the triple loop. The double Axel was nice and she had a level four for the flying camel spin. The Italian scored 53.17 points, well below her personal best of 67.15. She came off the ice shaking her head.

“Somehow I have to laugh about it,” said Kostner. “All my last practices have been so good and easy, maybe I should rather skate badly in practice, then I might be good in competition. I was very nervous today, therefore I’m just relieved to be through with it. On the way to Worlds, ups and downs are part of it. I hope I can see my highlight at the Worlds. I can cope with a defeat here. Of course I am a bit annoyed about those stupid mistakes.”