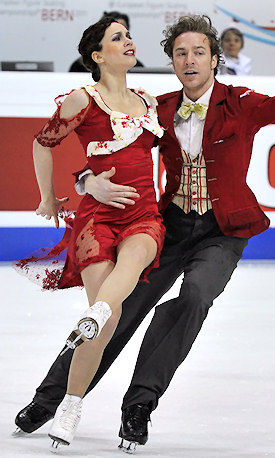 Nathalie Pechalat and Fabian Bourzat of France of France won their first European title at the 2011 European Figure Skating Championships.

France’s Nathalie Pechalat and Fabian Bourzat of France not only danced to the title in the ice dance event at the ISU European Figure Skating Championships 2011 in Bern, Switzerland, but also to their first medal. Silver medalists Ekaterina Bobrova and Dmitri Soloviev of Russia also made the European podium for the first time, while Sinead Kerr and John Kerr from Great Britain celebrated a comeback to claim the second European bronze medal of their career.

Pechalat and Bourzat skated last and finished a high-level ice dance event on a high note with an excellent performance to Charlie Chaplin. The French showed a real program, not just the execution of difficult elements, but the story of Charlie Chaplin and his blind girl friend with the mood changing from melancholic to cheerful.

The elements were there, of course, and they were well done. The lifts, twizzles and the spins merited a level four and the smooth footwork a level three. The Grand Prix Final silver medalists posted a new seasons best of 100.49 points and totaled 167.40 points to take the title.

“We’ve waited a long time for this. We enjoyed our performance and I hope you did as well,” Bourzat offered. “We tried to do a good job like in practice. Our coach told us not to get too excited and I felt relaxed even though I didn’t like the ice.”

“I wasn’t nervous; I was focused,” added Pechalat. “I tried not to think of the title, but it was hard. This is different from the Grand Prix. Our coach said, just do it like in an exhibition, a very important exhibition. It is part of the job to be very strong and I worked a lot on that. I was nervous for the short dance, but I love our free dance so much that there is no reason to be stressed. We were fourth twice at Europeans and now we got the most beautiful medal.”

Bobrova and Soloviev told a romantic love story in their dance to Melody of the White Nights. The Russians impressed not only with their difficult lifts and footwork but also with their speed and the effortlessness of their elements. The 2007 World Junior Champions scored 95.68 points and made the leap on to their first podium at Europeans with 161.14 points.

“When we came here, I really didn’t think about being on the podium. I just wanted to skate well. Now it is a feeling that I can’t describe,” Bobrova offered.

“This is a great success and a big achievement for us,” Soloviev added, “especially as we are only competing in our second European Championships. Within a year we were able to reach such heights and we are very happy with that.”

Kerr and Kerr had returned to music from the group Muse this season. The Scots danced to their second bronze with Exogenis Symphony after they had taken the bronze in 2009 with Ruled by Secrecy. Their performance was beautiful as well, soft and flowing, with the lifts perfectly fitting the music. John Kerr was shaky on the twizzles, but everything else was smooth. The twizzles got a level three as did the step sequences, while the lifts and spin were a level four. The brother and sister team earned 94.62 points and accumulated 157.49 points overall.

“It feels great,” said Sinead Kerr. “We we’re bit disappointed last year. We might of have had a better shot at gold if we had competed all season. It was a tough job getting any medal coming into this competition as the other competitors were great.”

“I am pretty happy with the free skate,” her brother added. “I got spooked on the first twizzle, so the second one ended up being not so good but the steps were okay. I am proud of Sinead coming back like this after her dislocated shoulder.”

“The music started off as an exhibition,” Sinead explained. “We liked the piece a lot and we thought that if we were to come back this year to skate, that was the only music we would use as a free dance. We worked on it this summer with Peter Tchernyshev, who choreographed the piece with us. We mainly wanted emotion, the feeling of joy and happiness. The feeling we had at the start of our career when we started to skate together.”

2010 World Junior Champions Elena Ilinykh and Nikita Katsalapov of Russia made quite a splash in their debut at Europeans by placing fourth. They presented a balletic program to Don Quixote which really felt like Bolshoi Theatre on Ice. Ilinykh’s authentic tutu, that was actually made in the Bolshoi, added to that impression. The young couple mastered the elements very well and earned the same levels as the champions. They two teams train together in Moscow under Alexander Zhulin and Oleg Volkov. Ilinykh and Katsalapov scored 153.48 points overall.

“Our coach Alexander Zhulin has picked the music and made the program. He wanted us to do something classical Russian, and only very few people have done a real ballet program in dance,” Ilinykh offered.

“We wanted to give a strong and clean performance and that’s what we did,” her partner added. “We’ve seen what a serious competition this is and for us and an endless amount of work is still ahead of us.”

Ilinykh is now hoping that they get sent to Worlds. This is very well possible as they ranked higher than National silver medalists Ekaterina Riazanova and Ilia Tkachenko. This couple slipped from fifth to sixth. They made no major mistakes, but a wobbly spin only received a level two and they also lost a level in the circular step sequence. Their performance to Mexican music was almost too powerful and appeared a little unpolished (145.05 points).

2010 European silver medalists Federica Faiella and Massimo Scali rallied back from a disappointing ninth place finish in the short dance to move up to fifth. The Italians put all their emotions into Manolete – The Passion Within and skated excellently. However, they lost a few points on their levels with the spin being a level two, and two lifts, as well as the twizzles, a level three (145.92 points).

“After last season, many people suggested that we should finish our career. We had a great season and the bronze medal at Worlds,” Scali explained. “I think we are such dreamers and all our career was about fighting and trying to fly as high as possible. We planned to keep going one more season. It was really hard as her health wasn’t the best. The good thing is that we never stopped believing and fighting. We arrived here with high expectations and after the Short Dance, it was so hard to skate. We dedicate this program to ourselves, our fans, the people that were dreaming with us one more time. We are disappointed we won’t be on the podium but we are happy that one last time we fought for our dreams.”

“It was a tough competition for us, because the preliminary round is something we ice dancers are not used to. It is difficult to hold the tension for six days and we are happy that we were able to push through,” Gazsi said.

The team was thrilled about their placement. “It feels good to have proved that to everyone and it was our motivation. The season has been going well, but two months ago we didn’t yet expect that these Europeans would be so successful for us,” Gazsi told the media.

Nora Hoffmann and Maxim Zavozin of Hungary and Pernelle Carron and Lloyd Jones of France skated well, but some low levels cost them a few points and they finished in 8th and 9th, respectively.