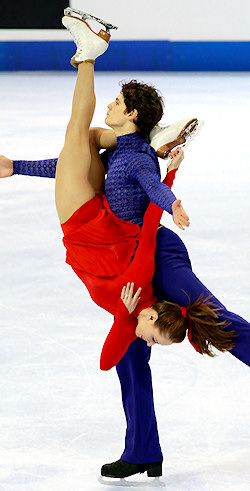 Even with the absence of 2010 Olympic champions Tessa Virtue and Scott Moir, the free dance still had a lot to offer. The dancers all brought their best to the ice and the final flight was an exciting testament to the depth of Canadian ice dance.

At the beginning of the season, Crone and Poirier’s free dance received plenty of attention for its interesting movement and choreography by Christopher Dean, however, in early performances, it was easy to see them thinking through the program. This is not the case anymore.

Crone and Poirier moved easily through the difficult transitions and their lifts floated right out of the steps. Only their step sequences were called level three; every other element was level four, and their serpentine lift (in which Poirier hit incredibly deep edges) was given +3 Grades of Execution (GOE) across the board.

Looking calm and relaxed, the two showed no signs of awareness that they were fighting for their first Canadian title until the program was done and the audience was on its feet. Crone joyfully leapt into her partner’s arms, thrilled with their efforts even before the scores were announced. When they received their season’s best score of 98.41 points, their total of 164.21 just kept them on top of the standings.

Although Kaitlyn Weaver and Andrew Poje were understandably disappointed with missing the gold medal by such a close margin, they were proud of how well they skated.

In a completely different approach from Crone and Poirier’s free dance, Weaver and Poje sought to entertain the crowd with their Moulin Rouge program, skating with plenty of pizzazz. Their lifts earned big gasps from the crowd and worked well with the story that they were telling in the dance. With level four on all elements except their opening level three circular step sequence (during which Poje stumbled slightly), they took the technical mark, but were second on the components mark.

Last year, just .30 points separated Weaver and Poje and Crone and Poirier in an event where both teams had major errors, and it meant the difference between Olympic team and Olympic alternates. This year, the margin was close again, but both teams were at their best and both teams were named to the World Championship team. Weaver and Poje also hit a season’s best with their free dance score of 97.54 and overall score of 163.18.

If Virtue and Moir decide that they are ready to compete at the Four Continents Championships and the World Championships, the task of being alternates will fall this year to Alexandra Paul and Mitch Islam. The role of alternates is sometimes a difficult one to swallow, but not for this team – at least this year.

Paul and Islam were thrilled to stand on the podium as bronze medalists in their second season together and their first year competing at the senior level. After such a beautiful free dance earlier this season at Skate Canada, the team felt pressured to deliver again, but they lived up to the task and competed extremely well. Their free dance was delicate and full of long lines and complicated lifts that matched the character of the program. Last year’s junior champions scored an impressive 92.33 in the free dance and 153.90 overall.

On a day of bests, Kharis Ralph and Asher Hill also delivered their best free dance of the season to match their fourth-place ranking from last year. With a free dance to a version of Summertime by Angelique Kidjo, they used innovative lifts to keep their program moving. Ralph and Hill were the only team that chose to do a difficult reverse rotational lift, and they did it well. Using deep edges and interesting lines that interpreted the African flavor, a familiar theme for them, it was clear that they had worked hard to create something special. Their 86.30-point free dance gave them a total score of 143.57.

Tarrah Harvey and Keith Gagnon’s major goal for the season was to make the top five at the Canadian Championships and qualify for the national team. They did just that with a charming, whimsical free dance that was performed as well as it was skated.

Harvey and Gagnon did not make any visible mistakes, although their rotational lift, which had earned level four at prior competitions, was only called a level one this time around. They hit level three for both of their step sequences, however, and skated with confidence and precision, even though they changed the middle section less than a month ago. Detailed choreography brought out the playful character of the number. The team excels at character-driven pieces, no matter what the character is, as evidenced by the stark contrast between their short and free dances. With 80.61 points, the mark was also a season’s best for them, and they earned 135.95 points overall.