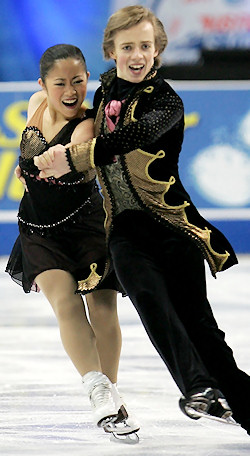 They train in relative obscurity far from any of the major United States ice dance centers, but somehow fifteen-year-old Joylyn Yang and seventeen-year-old Jean-Luc Baker make it work. The 2010 US Novice bronze medalists have made the giant leap to the junior level this season, and lead after the short dance in Greensboro, N.C.

“We focus and put our hearts into our skating,” Yang said after their spectacular performance. “We wanted a different style than what we thought everyone else would have, and we loved the style of what our coach selected, so we stuck with it.”

Skating to a cover version of My Favorite Things by Tajik singer/composer Oleg Fesov, Yang and Baker presented a sophisticated Viennese Waltz that at times felt as if the audience was intruding. The compulsory section of the dance was the highlight of the program for the leaders, proving that the dance can be technically proficient and intimate at the same time. For their efforts, Yang and Baker were rewarded with a level three on the first pattern and a level four on the second.

“It was a lot of work,” Yang said of learning the Viennese Waltz for this season. “It took a lot to get it to where we want it to be.”

Her partner agreed, and added, “As soon as we were sent out to the Junior Grand Prix this season, we learned a lot about what makes a team successful. We noticed the clean lines, the attention to detail, and the level of performance. We took all of that information and tried to incorporate it into our own skating.”

Yang and Baker scored 56.09 points for their efforts, a product of what their coaches, Stephen Baker and Sharon Jones Baker, called a combination of motivation and determination.

“We’re in a great situation because we can get on with our work since it’s nice and quiet in our rink,” Baker shared. “But we drive to Vancouver to let the kids train with the junior and senior teams there during the summer to get the team environment.”

Jones Baker added, “As long as a team is motivated and sets their own goals, then not having a lot of competitive teams around isn’t important. We drive to train with Megan Wing and Aaron Lowe once a week so that the kids have that experience, but we also have the benefit of having our own ice time.”

Finishing in second place was the seasoned team of Charlotte Lichtman and Dean Copely, the only American team to earn a spot in December’s Junior Grand Prix Final.

“We’ve been together for about two and a half years now, and because of that, we have had more opportunities to skate internationally,” Lichtman said of the team’s fall experience. “Making the Final boosted our confidence, and exposed us to so many different circumstances which definitely helps in preparation for competitions.”

Skating to a more traditional ballroom program using the music That’s Amore and On an Evening in Roma, seventeen year-old Lichtman and twenty year-old Copely performed with polish of seasoned competitors.

“I think that it went pretty well, and we have been focusing on the waltz levels,” Lichtman explained. “They are really tricky to get, but otherwise we felt really good. We felt like we performed it well.”

Licthman and Copely earned a total of 55.23 points for their program, and have set themselves up for an exciting showdown with Yang and Baker for the title tomorrow afternoon.

“There are a lot of great skaters here,” Copely noted. “We’re starving to win this title, but we know that we have to focus on our own skating for now, and then we can see what happens. But we would like to win this title.”

In third place is Lauri Bonacorsi (17) and Travis Mager (20), the 2009 US Novice Champions. The duo performed to Doga’s My Sweet and Tender Beast, and presented a softer side to the Viennese Waltz than the two teams ahead of them.

“We were hoping for higher levels on the two patterns,” Bonacorsi admitted when she saw the event protocol. “We earned a three and a four at Sectionals, so that’s what we were going for here. Otherwise, it felt really good.”

Bonacorsi and Mager, last year’s sixth place finishers, earned 52.30 points for the their efforts, and praised their new training team of Natalia Linichuk and Gennadi Karposonov.

“It’s been the best season that we’ve ever had,” Mager gushed. “With our coaching, our experiences- everything has just been phenomenal. Even the tougher physical parts have been more enjoyable, and that has paid off. It’s a great time to get a personal best.”

After a scoring glitch was corrected, Anastasia Cannuscio and Colin McManus moved up from eighth place to fourth with a score of 52.25 points. The seventh place finishers from last year’s championships skated with confidence and poise to put themselves in position to win a medal with a strong freeskate.

2010 Novice Champions Alexandra Aldridge and Daniel Eaton finished in fifth place with a score of 51.91 points, while Anastasia Olson and Jordan Cowan were sixth with 48.20 points.