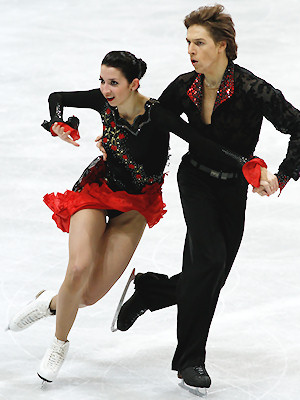 Ksenia Monko and Kirill Khaliavin of Russia perform to music from the Frida soundtrack at the 2011 World Junior Figure Skating Championships.

Monko and Khaliavin turned in an intense performance of their Frida Flamenco-themed dance. They picked up a level three for the footwork, however, Monko failed to hold her skate behind her back in the twizzle, and as a result, they were only given a level two. The last lift also received only a level two.

The Muscovites still won the free dance with  83.54 points and overall with 144.16 points.

“We are just incredibly happy to have won tonight,” Khaliavin told the press. “We would have liked to win last year, but it didn’t happen. Maybe we were not ready for it. But now we did it. We’ve worked for that the whole season and finally it happened.”

“Our free dance wasn’t the best today obviously,” he continued. “We had a problem with the twizzles and with the last lift and they were only a level two. I think the levels we got and our score were objective.”

When asked how they chose their music, Khaliavin replied: “Our coaches picked our music, but we know that this Spanish, Flamenco style suits us very well, we lived this program and hopefully we were able to project it on to the ice as it was supposed to be.”

Skating to Scorchio by Tonči Huljić, Pushkash and Guerreiro produced interesting lifts, but had only a level two for their step sequences. With 78.88 points, their free dance was rated third-best, but with their total score of 134.64 points, they held on to second place. The program was pleasant to watch, but didn’t have much emotion.

“We are reasonable happy with what we did,” he continued. “There were some nuances that didn’t work, but we had a good connection with the audience and with each other which is the most important thing to us.”

“We didn’t really pick a concrete theme,” Guerreiro said of their music choice. “We just tried to show our pluses like our lines and to build the program around them. The program was kind of a middle eastern thing, but we tried not to go too deep into it. It became something in between lyrical and middle eastern. For next season we’ll pick a more concrete theme.”

Lichtman and Copely went for a fun theme with Beetlejuice. They completed level-four lifts, and earned a level three for the twizzles and the circular step sequence. The program was well skated. The U.S. Junior Champions scored a season’s best with 78.08 points and took the bronze with a total of 133.36 points. They were ranked fourth in the free dance.

“Dean and I are both thrilled to have gotten third,” Lichtman said. “This was our first Junior Worlds. We wanted to come here and to skate our best. We are pleased with our free dance. There were a few levels that we didn’t get and that we hoped to achieve. Overall the skate and the performance were the highest that we competed it with our free dance. We enjoyed the free dance and we think it shows our individual style. We are excited overall.”

Copely talked about on how they chose their music.

“We had a lot of fun with our Charlie Chaplin free dance last year, acting and playing with emotions,” he said. “Marina Zueva suggested Beetlejuice for this year and we jumped on it right away. We thought it would be a lot of fun. There are a lot of quirky things in there, a lot of funny things, sneaking around. Next year we’re hoping to do something different. We want  to show that we don’t just do funny programs, we want to show how diverse we are as skaters.”

Tiffany Zahorski and Alexis Miart of France put out a stylish dance to I Like It Like That, Ain’t No Sunshine, and Mujer Latina. They were the first couple of the evening to earn a level three for both step sequences and moved up from ninth to fourth overall with 128.16 points. They even had the highest technical score.

“Our first Junior Worlds were a good experience for us and it went well,” Miart said. “We are very happy that we moved up a few spots, but I don’t think that we would have been on the podium, even if our short dance would have been at its best. It is nice for us that we had the highest technical score, although we know that the champions didn’t skate their best tonight.”

Slovakians Nikola Visnova and Lukas Csolley were solid once again to Notre Dame de Paris and came in fifth – an excellent result for the couple. They had 126.07 points.

Russia’s Evgenia Kosigina and Nikolai Moroshkin delivered a soft and flowing dance to Waltz No. 7 by Frederic Chopin. They had difficult transitions into their combo spin and the twizzles, but the footwork was graded only a level one and two. They remained in sixth place with 125.43 points.

The Spanish team of Sara Hurtado and Adria Diaz were crowd favorites with their interpretation of Be Italian, and their cool lifts drew applause. However, the judges didn’t quite agree and placed them in tenth again as in the short dance. However, as there was some movement in the standings, the finished ninth overall. A higher placement would have been justified.