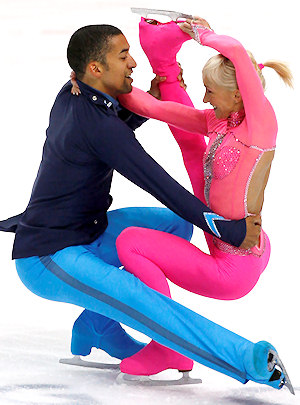 Aljona Savchenko and Robin Szolkowy of Germany took home their third World gold from Moscow, recapturing the title they had lost last year. Russia’s Tatiana Volosozhar and Maxim Trankov earned the silver medal in their first season as a team, while defending champions Qing Pang and Jian Tong of China settled for bronze.

It was a magic performance for Savchenko and Szolkowy. They were completely in sync, smooth and confident. Their fun program to Pink Panther included a big throw triple flip, a triple toe-triple toe sequence, double Axel, and difficult lifts and spins.

Like Patrick Chan in the Men’s event, the European Champions posted two new record scores in the free skating (144.87 points) and overall (217.85 points). The Germans broke the record score set by Xue Shen and Hongbo Zhao (CHN) at the 2010 Olympic Winter Games with 216.57 points.

“I think this third World title will go into the history of German figure skating,” said Savchenko. “The performance felt as good as the performance at the 2007 European Championships. This title is special because of the performance we gave, it was in Moscow, and it is the third title.” “It was a perfect skate at the end of this long season,” added Szolkowy.

Although the Germans were at their best, they knew they had tough rivals in Volosozhar and Trankov and Pang and Tong. The Russian couple skated last and delivered as well. Performing to Romeo and Juliet, they produced a huge triple twist, a triple toe-double toe combination, a triple Salchow (with a step out on his side), and a throw triple loop. The Russian Champions earned 140.38 points to move up from third to second at 210.73 points.

“We just wanted to present ourselves, as we are a new team,” explained Volosozhar. “This was our first major international competition as we were unable to compete at the Europeans because I hadn’t been cleared yet to compete for Russia. We just wanted to show our best performance and that’s what we did.”

Pang and Tong’s Liebestraum was emotional and elegant, but Tong’s struggle with the solo jumps stopped them from winning. He singled an Axel and touched down on the second Axel and he also doubled the toeloop. However, the two-time World Champions impressed as usual with their high throw jumps. The Chinese team scored 130.12 points, which was a seasons best, but they slipped to third with 204.12 points overall.

“We were a little nervous today and it is a pity we didn’t skate as well as we could have,” admitted Pang, “but we will try harder next time.”

“Today it would have been a good opportunity for us,” offered Tong, “but we missed it. It is our coach’s birthday and we have been skating together for 18 years. Maybe I thought too much and grew too nervous, maybe that’s why it was hard.”

Yuko Kavaguti and Alexander Smirnov’s romantic Clair de Lune was highlighted by a triple toe, double Axel-double Axel sequence, original lifts, and a throw triple Salchow, but Kavaguti fell on the throw triple loop. The Russians moved up to fourth at 187.36 points.

“We skated good, beautifully and gently,” said Smirnov. “It was hard to concentrate for this performance, but Yuko told me let’s skate for us, for our coach, for the audience here, and so we did. I think we made what we wanted. We gave everybody this feeling of warmth. One element didn’t come out, but we still have time until Sochi.”

Vera Bazarova and Yuri Larionov were fifth with 187.36 points and proved that the Russian pair teams are returning to former dominance. However, Larionov went down on the triple toe and Bazarova cheated a double Axel.

“I don’t know what happened,” commented Larionov. “I made a serious mistake. Just didn’t think.”

Caitlin Yankowskas and John Coughlin turned in a moving performance to Ave Maria that was dedicated to Coughlin’s mother who passed away last year. The U.S. Champions gave a strong performance with solid solo jumps (double Axel and triple toe), as well as beautiful lifts. They finished sixth.

“The long program today was everything we were hoping it would be — a farewell to this very emotional piece,” Coughlin said.

“I knew it was going to be a good performance because we were both really serene and calm before we took the ice,” added Yankowskas. “I just looked at him and I got chills, thinking “Oh man, we’re not alone. So I had the utmost confidence going into this program and we didn’t second guess one thing. It was so awesome to skate that way.”

Meagan Duhamel and Eric Radford had an ambitious performance with a triple Lutz-double toe-double toe combination and triple throws. Duhamel only singled the side by side toeloop. Radford seemed unaffected by his broken nose (Duhamel’s elbow on the triple twist).

“My heart was racing before the twist today since I was really focused,” said Duhamel, “but I kept my thoughts about the good ones we did in practice. We had a pretty rough start to this season. The whole season seemed like a never ending fight. It was a battle to come here and it was a battle to finish this competition, but as a couple, we are willing to push through anything.”

“I feel good, my nose is ok,” Radford shared. “It is almost like nothing happened with it. I had ice on it all night, so it looks good now. To compete here was just like a surreal moment after what happened yesterday. It is funny to look back at it now.”