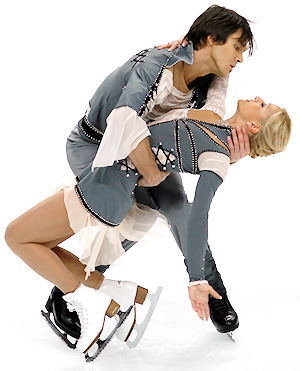 Russia’s Tatiana Volosozhar and Maxim Trankov perform to Romeo and Juliet by Sergei Prokofiev at the 2011 World Figure Skating Championships.

When the  Ukrainian-born Tatiana Volosozhar and Maxim Trankov teamed up in May 2010, skating fans and  experts were sure that they could become Russia’s new dream team – and they did.  Even after a few days of practice it was obvious how well they were matched. In  December, after skating together for five months, Volosozhar and Trankov won  Russian Nationals, upsetting three-time champions Yuko Kavaguti and Alexander  Smirnov.

However, their much  anticipated international debut was delayed until Volosozhar was eligible to  skate for Russia in February – exactly one year after competing at the Olympic  Games in Vancouver for the Ukraine, with former partner Stanislav Morozov. After skating at the Montblanc Cup in Italy,  Volosozhar and Trankov finally entered the big stage at Worlds and made a splash. Ranked  third after the short program, they moved up to take the silver medal with a  strong free skate.

“We didn’t even think  about the silver medal (before Worlds),” Volosozhar confessed. “We thought,  maybe we can get the bronze. The result was completely unexpected for us. The  most impressive moment of the championships was how enthusiastic the spectators  were even before our short program, and I’ll never forget how they gave us a  standing ovation after the free program.”

“We were very nervous before the short  program,” revealed Trankov. “We relaxed only after the throw jump when we knew  that we landed all jump elements.”

For his partner, skating last in the long  program was hard. “At first I was tense because of the starting number,” Volosozhar noted, “but  then I got into the right mood, calmed down and felt confident when we went out  to skate.”

“This  caused a moment of anxiety,” continued Mozer, “but before the free skating, there was already a  certain calmness. It was clear that they had done half the way and they did it  well, so there were positive emotions. Plus our free program was calmer and  energetic. Our short program was very intense and emotional, very fast,  therefore it was harder. The free program was easier in this regard.”

The silver medal on the other hand wasn’t such a big  surprise for the coach. “Overall, they are very professional people and during  the season it was evident that they were ready for such a strong result even in  the first year as a team,” Mozer said. “Of course we hoped that thanks to their  experience and their abilities that they are able to fight for medals in their first  year. We hoped for it, we wanted it, and thank God it happened.”

It also happened thanks to a lot of hard work and the  commitment of two athletes who agreed to change a lot in their life and to start  from scratch. Volosozhar moved from Germany (where she had been training since  2008) to Moscow and Trankov moved from St. Petersburg to the Russian capital.  Volosozhar’s fiancée and former partner Morozov became part of their  coaching team.

“Honestly, it is now easier for me to have a partner on the ice  and a different partner in life,” Volosozhar shared. “Stanislav is so happy now; coaching is what he  wants to do. His father was a coach as well and his mother always told me that  she thinks Stas would be a very good coach.”

For Trankov on the other hand, Morozov used to be his  competitor. “For me it is not true when  they say ‘there are no friends in sports’,” said Trankov. “I don’t see it that way. I think on  the ice is one thing, but you can be friends in real life.”

“I was  just a little cautious at the beginning when Tania told me that Stas would work  with us, because I wasn’t sure how I’d relate to a person I was competing with  and whom I always beat in competition,” Trankov continued. “I had to think something  like – ‘what do you want to teach me, you were always behind me’. I had these  thoughts. Then we went to the summer training camp and worked on lifts and the  twist and I tried to analyze what he was saying and doing, and he did say some  very good things. Yes, often our opinions differ, but he never forces his point  of view upon me. He treats me as an equal. We discuss. I can convince him, and  he can convince me.”

Morozov was also the one who suggested Trankov as a  potential new partner to Volosozhar when he knew he was going to retire after  the Olympic Games in Vancouver. And it was him who had the idea to turn to Nina  Mozer for help. It all came together and the new team is training in a nice  facility called “Inspiration” in northeast of Moscow.

The ice rink is  sitting in the middle of a calm and green – at least for Moscow – neighborhood  with new multi-story apartment buildings and some smaller shops. The skaters  rent apartments within walking distance to the ice rink so they can go home in  the break between the two daily practice sessions and walk their dogs.  Volosozhar lives with Morozov and their dog while Trankov shares his apartment  with his long-time girl friend Alexandra, a cat, and a dog.

When they started out, the side by side jumps and the  death spiral were the easiest elements for them.

“We’ve worked a lot on the throws and on the twist and  we are still working on them,” added Volosozhar.

Volosozhar had to change her  technique in order to adapt to her new partner, but she did it well; their  amazing triple twist is the proof.

“Obviously my goal was not to do it worse  than Stas, and I wanted him to teach me the maximum,” Trankov said about  learning the twist with Volosozhar. “At the beginning, we couldn’t even do a  double. It was bad. At one practice it wasn’t working at all, and Stas said,  ‘just try a triple. Tania says it is easier for her to do a triple’. And we did  a triple, and it was decent for the first time. It worked from then on. We  first learned to do a triple and then we were able to do a double,” he  continued, laughing.

While they are technically already very strong,  Volosozhar feels that they can still skate better as a pair.

“Our biggest weakness is probably that we are human  beings and can make mistakes,”  Trankov  commented. “It would be easier if we were robots. So we believe in each other, we believe in ourselves, and look for a  positive experience. We are both maximalists. If something doesn’t work, I’m  upset and I ask myself why I can’t do it. Tania is calming me down then. At the  same time, if she can’t do something right away, it is a tragedy for her, then  I support her. We support each other.”

“We both have a similar kind of humor,” continued Trankov. “We  can make jokes and nobody is offended. We have a good relationship with each  other because we are friends.”

And indeed, the skaters seem to  get along very well. During practices, they often share a smile or a joke. The  atmosphere is relaxed but productive.

Coach Mozer sees the professionalism of her students  as one of their strong points.

“It is the professionalism of someone who knows  why and what they are doing something, and how to achieve a result,” she  noted.

“For a professional, these  are just things that aren’t finalized yet,” she pointed out. “You know, when someone is second in  the World, they’re fighting for first place, so what weakness could they have?  There are incidents, but after working with them for a year, I cannot say that  they have a weak side. I didn’t see any weaknesses that I could name. They can  grow stronger in some professional qualities, moral qualities, psychological  qualities – this is just about self-improvement.”

“It speaks about their strength  if people do within nine month such a big volume (of work) and become  competitive,” Mozer summed up. “Each human being has weaknesses, but it isn’t even worth talking  about them. The important thing is something else. It is interesting to work,  to live, and to talk with them.”

“As people, they are easy to communicate with,” Mozer explained. “They are approachable and  they know how to present themselves. Maxim especially is an interesting person  to talk to, he is well-read. Tania is also very interesting, but just calmer  and so level-headed. She is a woman with a cool head. She goes out on the ice  and just transforms and turns into an emotional, intense person.”

Asked to describe each other in three words,  Volosozhar answered quickly: “Emotional, quite good-natured, positive,” but  Trankov took a while to think. “I cannot describe her in three words,” he  finally said. “I just can say that her main trait of character is the ability  to communicate. She is a very social being and can find an approach to  everyone. She is caring, she is taking care of me and of Stas. It is important  for me that she has a good sense of humor, because I am cheerful and like to  make jokes, and we can laugh together.”

On May 15, the skaters and their coaches travelled to  Nikolai Morozov’s summer training camp in Hackensack, New Jersey and plan to  stay there until June 23. Both programs will be new and both will be  choreographed by Nikolai Morozov this year.

Morozov choreographed their  long program to Romeo  and Juliet last season, while the short program was done by Igor Tchinaev.

Mozer wasn’t ready to reveal the new programs yet. “We’ll have two completely  new programs. There are some interesting ideas, but I won’t tell now.”

After the summer training, Volosozhar and Trankov want to  take part in some shows in Asia before returning to Moscow. They plan to debut  their programs at the Nebelhorn Trophy in Oberstdorf, Germany, in September and  want to do two Grand Prix events. At press time, they decided not to  use the option of doing three.