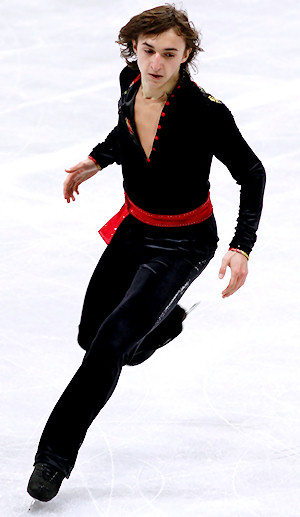 His name turns heads in the figure skating world: Artur Dmitriev. But Dmitriev junior wants to make a name of his own in the sport that made his father one of the most decorated male pair skaters in history. The Russian began competing internationally in the fall of 2009 and was not awarded a Junior Grand Prix assignment at that time. To the surprise of many, however, Dmitriev earned a trip to Junior Worlds in March 2010 after taking the silver medal at the Russian Junior National Figure Skating Championships.

This past season, Dmitriev debuted on the Junior Grand Prix where he placed second (Ostrava) and fourth (Dresden) and won the Russian National Junior title. At Junior Worlds he placed second in the short program, but finished eighth overall after struggling with the long program.

“I won’t say it was my best season. It simply was very hard,” acknowledged Dmitriev. “There were so many factors like my back (injury), I changed coaches in the middle of the season… but I still pulled myself together and at (Junior) Worlds and I skated well in the short program. I think it is difficult to skate such a program after a few months. The free program just didn’t work out so well. I was tired after the qualifying. Of course I should have done better, but it just didn’t happen. So it was a hard season but there was also something positive.”

This past season brought many changes for the skater. Right after the Junior Grand Prix, Dmitriev left his hometown of St. Petersburg where he had trained under Alexei Mishin. It’s the same ice rink where his father is coaching pairs and his mother, Tatiana Druchinina, a former World Champion in Rhythmic Gymnastics, is working as a choreographer. He moved to Moscow and is now training in the CSKA Army club under the tutelage of Elena Buianova alongside World Junior Champion Adelina Sotnikova.

Dmitriev wasn’t up to discussing the details of his coaching change.

“I don’t want to talk about these problems, because they were personal,” he said. “We had our arguments. The important thing is that I am very happy with my conditions now. Alexei Nikolaevtich (Mishin) is a very good coach, and I respect him very much, but it just happened that way. Maybe it was my fault. It just didn’t work out.”

Meanwhile, Dmitriev has adapted well to his new training and living conditions.

Dmitriev feels welcomed in his practice group at CSKA Moscow. He lives in a private room in an athlete’s hotel on the property of the club. For the first time, he lives alone. He prepares his breakfast and can eat lunch and dinner in the ice rink canteen.

“Of course I miss my mom, but basically everything is fine,” the 18-year-old noted.

The skater admits readily that he really likes jumps in figure skating.

“I don’t have a favorite jump, I like them all,” Dmitriev said. “I just loved to jump and I still do, but now there are also new things and I like to work on choreography, on spins… everything is very interesting”

“I think now after the World Championships, figure skating is going into the right direction,” he continued. “Patrick Chan showed a strong result. He was able to combine what many people think cannot be combined, but in fact it is all real. He did the quad-triple, skated brilliantly, and spinned very well. I am very pleased to see that people strive to do quads and choreography, and it is looking good.”

Dmitriev claims he is stronger in jumps, but is working to balance everything out more so that he too can have good choreography and spins.

“The spins improved already,” he elaborated. “I also worked a lot on skating skills, steps, and also with dancers. There is improvement, and I just have to continue to work and to balance it out, like Patrick Chan. He has spins, and footwork and skating skills. All this is of high quality and well done and he is skating with his heart, with emotions. I want this, not the same, but that I can improve everything in my own way.”

While Dmitriev was reluctant to describe his personality, coach Elena Buianova had to say a lot.

“Artur is a very emotional person, first of all. And as he is an emotional person, this is all transferred on to the ice,” she explained. “On the ice he is not ordinary. He has his own way of thinking and he has a vision, and this is reflected in his skating. Because he is emotional, he sometimes has uneven practices. It is up and down, up and down.”

“As there is creativity in him, he is not a calm person,” Buianova continued. “He constantly has to do something, create something, and if he is not in the right mood or captivated by something, then his practice is more passive. I also try to get used to his character and to even agitate him so that he sees a meaning in the practice, what he does it for, and to inspire him. He needs to be inspired, then he can move mountains. As a person, he is very good-natured, attentive, and these are rather rare qualities.”

“Attentiveness is really a rare quality in a man,” Buianova pointed out, laughing. “He really likes cars. In in his heart he is a car-racer, he cannot be calm. When he told me that he’d like to work with cars later on, everything became clear to me. This is not a profession, it is a state of mind. He is like this on the ice.”

Dmitriev revealed that as a child he really didn’t want to skate at first, nor did he ever consider gymnastics, but he always wanted to be a car racer. When the family moved to Hackensack, N.J., he was almost seven years old and started to skate more seriously.

“Step by step, slowly, I got to where I am now,” he said. “I wanted to become a racing driver. I wanted to participate in car rallies, but it didn’t work out and I really liked figure skating. In the end it happened that I chose figure skating.”

Off the ice, Dmitriev is active in his spare time as well.

“Sometimes I’m play football and I do other sports. I also want to play paintball, this is a lot of fun. We also want to go karting. I’m interested in a lot of things,” he said.

Dmitriev plans to study physical education starting this fall. He is fluent in English as he lived with his parents for seven years in Hackensack before returning to St. Petersburg.

“I really like Russia. I want to live here. In America it is also very good, so each place has its positives,” he commented.

The quad is a challenge that he loves.

“Last year in May, I did three different quads (toe, Salchow, loop),” Dmitriev recalled. “I tried to do the Lutz and I rotated it, but fell. This was in the USA, when I was working with (Evgeni) Platov and trained my long program and I started to jump. It worked.”

However, the quads were gone by the time the season started as he suffered from a back injury.

“So now I have new boots and it is going very well,” Dmitriev shared. “Hopefully I’ll be able to bring back what I could do and maybe add something new. I won’t say too much now, but it is a goal.”

Buianova agreed: “We have to up the difficulty. We’ll look at the quad; he really wants it.”

Dmitriev has prepared two new programs for the upcoming season. The short program is set to Beetlejuice, which suits his style very well. The music was suggested to him by Tatiana Tarasova and Buianova. He is very happy with his long program as well, but couldn’t recall the title of the music.

His long-term goals obviously include the Olympic Games, but the focus has shifted.

“Before, I always wanted an Olympic medal,” Dmitriev revealed. “I used to think only about an Olympic medal and so on. Of course, I still want it now, but it became more interesting for me to present myself in an exciting way on the ice. For example by doing an interesting program and doing something original. Now my goal is basically just to skate so that everyone enjoys it and that I enjoy it myself. If I skate well, the result will come.”

“It doesn’t really concern me that my parents [were successful athletes],” he offered. “I am by myself, this is my destiny. Yes, I am their son, but I don’t feel a special responsibility. Just because of a name… I just need to be a good person.”

At any rate, it won’t be long before he makes a name for himself.