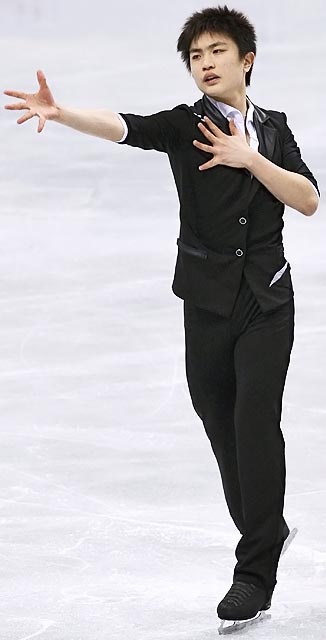 Chinese figure skating is mostly known for their strong pairs these days. Pair skating is the most popular discipline and the Chinese pairs have had a lot of success. But the first Chinese World and Olympic medalist and World Champion was Lu Chen, who competed in the 90s.

However, no Chinese man has yet stepped on to the World podium. Chengjiang Li, a strong jumper, came close, finishing fourth and fifth at Worlds. He also became the first Chinese man to win an ISU Championships in 2001 when he claimed the gold at the Four Continents Championships. A couple of Chinese men medaled at Junior Worlds, most recently Nan Song in 2010. However, China is still waiting for a true male figure skating star, and perhaps Han Yan can fill that spot.

Yan drew attention immediately when he debuted internationally at the Junior Grand Prix (JGP) event in Istanbul in 2009 and grabbed the gold. Since it was his only JGP event that season, he had no chance to qualify for the Final. This past season was a different story.

After striking gold in his two JGP events in Austria and the Czech Republic, Yan won the silver medal in the Junior Final in his home country.

“It wasn’t my best performance in the free skating,” recalled Yan. “I did better in practice, but I was very happy with the result. Skating in front of a home crowd means some pressure, and I made some mistakes.”

Yan ended the season with a respectable sixth-place-finish in his debut at the World Junior Figure Skating Championships in Korea with a clean long, one day before his 15th birthday.

“I still feel I could have done better,” he said.

Yan sets himself apart with excellent skating skills and his musicality and softness on the ice. His jumps look high and easy.

“What I like most about skating is the gliding on the ice,” the athlete noted. “I don’t really like the spins. I still need to work a lot on them.”

This past season, Yan didn’t include yet a triple Axel or quad into his routines, but he is preparing for that.

“At the beginning of the (past) season I tried the quad, but it didn’t work so well,” he admitted. “My triple Axel and my quad toe weren’t quite ready yet, but I need to do them in the future. Otherwise my technical level isn’t high enough compared to the other high-level skaters.”

The teenager describes his personality as “cheerful,” which came well across in his Cotton Club short program. The long to Zigeunerweisen by Pablo de Sarasate, was more serious.

“I actually pick my music myself and I like the classical style,” acknowledged Yan. “For the new season I plan to keep my long but I think I will change my short. At the end, it is the decision of my coach.”

Yan is based in Harbin in the north of China and trains under Shuguang Jia. His parents have moved to Beijing and the skater stays with his aunt in Harbin.

“Sometimes I attend training camps in Beijing and then I visit my parents,” he explained, “but I don’t have many vacations and sometimes I’m tired.”

Yan trains four to five hours a day, and is still attending school. However, most of the time the skaters are taught at the ice rink due to their practice schedule.

“I will stay a junior in the new season,” the 15-year-old announced. “My goal is just to show my best performance.”

But he has long-term goals as well: “I really want to compete at the Olympic Games. I hope that I can achieve my goals and increase my performance-level.”

Yan started skating when he was five years old and there are no other athletes in his family.

“I got skating boots as a birthday present and I liked skating right away. It was a lot of fun,” he recalled.

Skating is now his life.

“I think later on I’ll have a job in skating, maybe I’ll become a coach,” the athlete said.

He names 2008 European Champion Tomas Verner of the Czech Republic and Canada’s reigning World Champion Patrick Chan as his idols in the sport.

“It was great to watch them competing at the Final in Beijing,” Yan noted. “I like watching videos with programs of other skaters, because I want to learn from them. I feel I still have to learn a lot.”

Off the ice, the teenager enjoys listening to music, dancing, and playing video games. He likes to travel, but admits that he feels more comfortable in Asia.

“I am not so used to the other food, I prefer Chinese food,” he said.

This upcoming season, however, he’ll have to do without Asia in his international events. There is no Junior Grand Prix in Asia, the Final is in Canada, Junior Worlds are in Belarus in Europe, and if he is selected for Four Continents, he has to go to the USA.