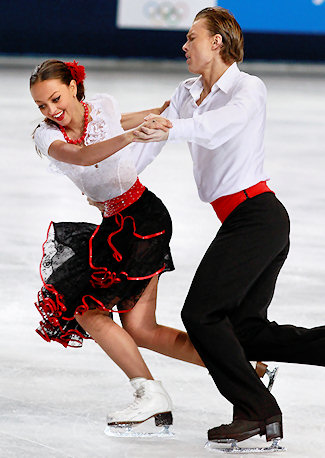 Russia's Ekaterina Riazanova and Ilia Tkachenko perform their Free Dance to Danzón no. 2 by Arturo Márquez at 2010 Trophée Eric Bompard.

Russian ice dance is full of talent, and the tough competition motivates the teams to do even better. Ekaterina Riazanova and Ilia Tkachenko belong to the current generation of strong teams that are fighting to become Russia’s number one ice dancers. The outcome of this battle is not clear yet with several contenders more or less at the same level.

Riazanova and Tkachenko teamed up in the spring of 2009, but both were successful at the junior level with different partners. It was no surprise that the Russian Figure Skating Federation wasn’t too thrilled to learn that Riazanova wanted to dump her previous partner, Jonathan Guerreiro, with whom she just had won the bronze medal at Junior Worlds, in order to continue with Tkachenko.

Tkachenko had quite a few partner changes under his belt. He was the 2005 World Junior bronze medalist with Anastasia Gorshkova, the daughter of his long-time coach Alexei Gorshkov, and won the Junior Grand Prix Final with Maria Monko in December 2007. After Monko retired from skating in 2008, he skated with Isabella Tobias, but never competed with her. He was looking for another option.

“I made an offer to Katia (Riazanova) and she accepted,” he said. “I knew Katia from juniors and I felt that she was the most suitable option.”

Riazanova didn’t have to think for long when Tkachenko asked her to skate with him.

“I was in shock! I didn’t expect this at all and never would have thought about it. Then we had a try out, and I really liked it and I felt that he was a strong partner. I wanted to skate with him and therefore we decided that this is a better perspective for me,” she said. Riazanova, who trained in Moscow until then, moved to nearby Odintsovo.

This wasn’t the only change for the young dancer.

“Obviously at the beginning it wasn’t very comfortable (to skate with Tkachenko),” noted Riazanova. “The technique was completely different and it took me a long time to adapt.”

Tkachenko felt different about it.

“For me it felt comfortable right away,” he said. “I have had so many partners that I was used to adapting to a new one,” he answered, laughing.

“For me it was different of course, after I having skated with John (Johnathan Guerreiro) for such a long time,” added Riazonova. “It was hard, because I had a new coach and a new partner, completely different people around me.”

Coach Alexei Gorshkov was pleased with his new team, and felt the first impression was a good one.

“Katia is a very talented girl and she felt confident right away with a more grown up partner,” Gorshkov explained. “She has changed a lot in these two years. Obviously we didn’t succeed in everything we wanted and hoped for, but not everything depended on us. They did a lot of work. As a maximalist, I feel they could have done more, but in our discipline there are always additional factors such as luck or the political situation. I wouldn’t say they had a lot of luck, but what can you do? You have to move on.”

While the skaters and coaches felt they were a good match, others didn’t agree.

“When we teamed up there were a lot of problems,” revealed Tkachenko. “Obviously many people didn’t want us to skate together. Some people from the Federation and from the Moscow region were against it. It was very difficult but we overcame all this.”

Riazanova and Tkachenko both were new to the senior level when they started competing together internationally in fall 2009. They ranked sixth in their first Grand Prix – the Cup of Russia – and progressed significantly in the past season. After finishing fifth at Skate America in October 2010, they took the silver medal at the Trophée Bompard and Russian Nationals before placing fifth in their debut at the 2011 Europeans Figure Skating Championships.

“Basically we are happy with our skating as we skated very well in almost all of our events in the past season,” Tkachenko said. “We had a few small errors in the free dance at Europeans, but this was the only competition (with mistakes), and fifth place in our debut was very decent. At the Grand Prix and Russian Nationals we skated very well.”

As they were first alternates for the 2010 World Figure Skating Championships, the ice dancers kept training and worked on new programs until the end of May. They did not spend their vacation together: Riazanova went to Egypt, while Tkachenko traveled to Barcelona and Nice for sightseeing.

“I was there (in Nice) for a about a week and had a look at the surroundings and checked out the set up before Worlds,” Tkachenko joked.

They resumed training on June 20 and went to a summer camp in Bulgaria for three weeks. There, they worked on their new programs. This year, their free dance was ready before the short dance. The Russians chose Snowstorm by Georgi Sviridov, a piece that has been rarely used, if at all, in ice dance.

“We already wanted to use this music in the past season, but as the composer is Sviridov, and we had a Waltz by Sviridov, we decided that we’ll put it aside,” Tkachenko offered. “This year we didn’t have a lot of choices, and we decided at once that we want to try a lyrical, slow music, because we had quite fast music before. So it was a common decision. I think it can work out very well. I don’t remember someone using this music (in dance).”

Riazanova and Tkachenko went to ballroom dance classes in preparation for the Latin short dance.

“I like the Latin dances,” Riazanova said. “They suit me well, but obviously it will be hard with the two series (of the Rhumba) and the side by side circular steps.”

“We are now working to be able to skate the programs at high speed,” coach Gorshkov shared. “We are working a lot on the elements and the spins, and are building a base on which we can live until the Olympic Games.”

“We are working with acrobats as well, on the lifts,” Gorshkov continued. “We pay a lot of attention to this because it is not choreography and expression alone. Now, speed and lightness are appreciated. We try to find the balance between technique, dynamics, elements, and choreography. We are all striving for this in all disciplines – not only in ice dance. Everyone now wants to embed the elements into the choreography.”

The Olympic Games 2014 in Russia are, obviously, always in the back of the athletes’ and coach’s minds.

“I think the goal in the sport is to achieve a good placement at the Olympic Games,” Tkachenko noted. “All athletes strive for that because this is the highest step in an athlete’s career. It is the same for us.”

Both ice dancers are excited about the Games being held in their home country.

“This is super,” said Tkachenko. “All our dreams could come true.”

However, both skaters realize that it will be tough to even make the team, and they think about what they need in order to break through.

“We need to search for something new, we need to use some new elements, find a new approach, work with new people, new choreographers,” said Tkachenko. “I think this is the only method, as basically everyone has the same technical level. The one who looks better will be on top.”

Gorshkov agrees. “I want them to skate better than everybody else. I set a serious goal for them. It is another question what will happen. They should do well if they work hard. We have only one plan: that they skate better. They are in the stage of fighting, but they are capable to make the jump to another level. They are ready. I am happy with their goal-orientation and their work ethics, but I still want more. They need to be clearly better than the others.”

“I think they have very soft knees first of all and they are very expressive,” he continued. “Even if you compare them with the leading teams, there are only a few that can command their bodies as well as they do in regards of expression and choreography.”

“They are very technical,” Gorshkov answered when asked about the advantages of his couple. However, he also knows what is lacking. “They (Riazanova and Tkachenko) are very calm. I’d like a little more splash for them and we’ll try with the short dance to do something very emotional. There should be more energy. Katia is a very expressive girl, but there is no limit for perfection and I always want more and more. And I want more energy from them. I would like them to quarrel sometimes. This adds emotions,” he added with a laugh.

The skaters feel that technique and strong emotions are their strong points and sometimes the lack of speed and lightness is a weakness. Both think that in dance, there should be less focus on the elements.

“Dance has the beginning position, then you rush through all elements, and you can dance a little in the middle, and then it’s the finish,” Tkachenko summed up. “It is very difficult to show something and to tell a story on the ice.”

“Before, you could watch and see the story,” his partner added. “The spectators understood it. But now I think it has become difficult to combine the elements and the set up of the program.”

The ice dancers haven’t made definite plans for the time after Sochi.

“We’ll see how the Olympic season plays out and which further perspective we’ll have,” Tkachenko noted. “Everything is changing very fast and we don’t know how figure skating will be like in three years.”

Both athletes are studying. Riazanova, 20, is a student at the Institute of Physiculture, while Tkachenko, 24, is studying municipal administration.

“My only day off is Saturday and I have to go to university from nine in the morning to six in the evening to sit there the whole day,” said Tkachenko. “Therefore it doesn’t work out every time. After a hard week with practices and competitions, I just want to sleep on my day off. It is very hard to combine serious studies with sport at this level.”

Both hope to finish their studies next year. Tkachenko is thinking of a career in sports administration after his skating career.

Riazanova, on the other hand, hasn’t thought too much about her future after skating yet.

“Let’s see when we finish our career,” she said. “I don’t like to look too far into the future. So far I just have one goal, and I want to believe that I can fulfill it. Therefore I’m not thinking too much about other things.”

Tkachenko describes his partner as “fragile – this means you have to keep a close eye on her, physically and morally so that nothing happens to her. Then she is good-natured definitely and she is beautiful.”

Riazanova answered the question after thinking for a moment. “He is funny, this is obvious. He is very fair-minded. I feel his support and he is reliable.”

Riazanova and Tkachenko are scheduled to compete in the Grand Prix events in Canada and Russia. They may also plan some additional events in the fall. It will be an important season for them to bring themselves into a good position inside Russia.