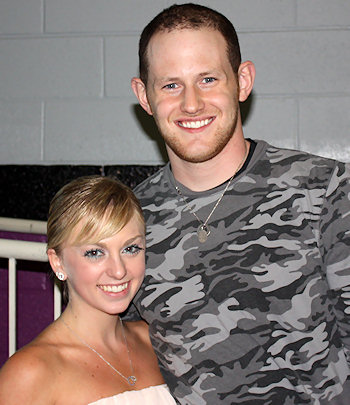 At the end of last season, it seemed as if the world of figure skating in the United States was falling apart—at least in terms of tested international level partnerships. Half of the senior pairs podium were kaput, and the bronze and pewter medalists in ice dance had also called it quits. But then, much like a square dance, new partnerships began to form causing quite a stir among the skating Internet community.

After failing to make the World Team for the 2011 Championships in Moscow, former American gold medalists Caydee Denney and Jeremy Barrett dissolved their on again-off again partnership. While Barrett announced his intent to retire from the sport, Denney was determined to continue to compete.

Meanwhile, shortly after debuting at the 2011 World Figure Skating Championships, current U.S. champions Caitlin Yankowskas and John Coughlin severed their on-ice relationship. Like Barrett, Coughlin, 25, decided to hang up his skates and see where life would take him.

“I asked (coach) Dalilah Sappenfield if I could coach with her,” Coughlin said. “She told me to think about it over the weekend because she didn’t want me to end my career with regrets about what could have been.”

But then Denney, 18, and her family moved back to Colorado Springs, Colo., so that younger sister Haven could resume training with her previous partner Brandon Frazier. It was shortly after Denney began training at the rink just to keep her skills sharp that Sappenfield suggested that Denney and Coughlin have a try out.

“I don’t think that we expected (the partnership) to click so quickly,” Coughlin said. “It kind of surprised us both.”

Denney immediately noticed how strong Coughlin was, which allowed her to trust her new partner in the high-risk elements very early on.

“I felt very comfortable even when we were only skating together for one week,” she remarked. “I’ve never felt uneasy about trying new elements because I know that I am going to be safe.”

Sappenfield noticed immediately how similar the two skaters’ timing matched up, which is one reason why she feels that the partnership has progressed so quickly.

“The first thing that I learned was that they are a team that I have to harness instead of nudging forward,” she explained. “I often see them running more repetitions or spending more time on things than I have asked because they are always looking for improvement.”

Ever the perfectionist, Sappenfield realized that although her team is progressing quickly, they still need time to develop as a team.

“Technically they are a strong team,” she said. “The things that they need I feel will be gained through more mileage as a team.”

To get a start on that mileage, Sappenfield determined that Denney and Coughlin should begin climbing the ladder at the Liberty Summer Competition in Aston, Penn., just two months into their pairing.

“We showed both of our programs at the Broadmoor Open (as exhibitions), and we went to Liberty to help us learn about the nickel and dime things that will help us to score better,” Coughlin said. “We came away with some good information about out elements, and have made modifications to increase the value of certain things.”

In Aston, Denney and Coughlin performed admirably, scoring a whopping 58.00 for their East of Eden short program, which placed them atop the leader board.

“We had some problems on the death spiral,” Denney explained, “but overall, we were very encouraged with our result at Liberty. We learned a great deal there about what we needed to improve.”

With a strong debut behind them, Denney and Coughlin were able to once again get back to work on developing their relationship on ice.

“The most important thing is that we want to enjoy the process of our skating,” Denney explained. “We have fun and enjoy working together every day. We love being at the rink, and we are working through our compromises very well.”

Coughlin agreed. “In this partnership I feel very peaceful. We’re embracing that early on that the technical things are coming together, and that we can rely on them. This has allowed us to spend our time working on our connection.”

To help with that connection the couple decided to work with Marina Zueva, choreographer of Yankowskas and Coughlin’s signature Ave Maria free skate from last season.

Sappenfield has completely repackaged both skaters from a more athletic look that both carried over from their previous partnerships into a sophisticated and elegant appearance on the ice. From something as simple as Denney growing her hair out to getting Coughlin to point his toes, this pairing resembles nothing that either skater has been a part of before.

“John and I are very united together, and I love working with Dalilah,” Denney said. “I trust her to make decisions for us that will help us move forward in skating. She’s very motherly, and cares for us very much. I know that she will guide us in the right direction.”

A few weeks later after competing at Liberty, Denney and Coughlin traveled to Indianapolis to face a larger and more experienced field at the Indy Challenge. The goals for the competition were to perform both of their programs in a competition for the first time and to debut their new free skate to Nessun Dorma.

In the short program, the duo rocketed into first place with a strong performance that earned an impressive 63.14 points. With that behind them, Denney and Coughlin breezed through their free skate with ease and earned 116.02 points—more than ten points more than the second place finishers.

“For the first time competing the free, it felt very comfortable,” Denney said of the program. “Some things could have been better, but overall it felt very good.”

As a reward for their solid performances in Indiana, Denney and Coughlin were assigned by U.S. Figure Skating to compete at the Nebelhorn Trophy next month in Oberstdorf, Germany.

“The international judges are already familiar with both of us from our previous partnerships, but it is great to get out there and compete as a team,” Coughlin said. “It’s important to record a season’s best score and hopefully score some ranking points so that we are in a good position heading into international championships later in the season.”

“We were already alternates for the Grand Prix because of what Caitlin and I were able to do together last year,” Coughlin explained. “There still is a TBA spot at Skate America, and we would like to be considered for that, too.”

Just three months into their partnership, the hunger is already evident in both Denney’s and Coughlin’s eyes. They want to win.

“Our plan this year is to go out and win Nationals,” Denney admitted. “We want to got to Worlds and make the podium or finish at least in the top four. Of course we want to continue to improve at each competition that we go to, but we know what we want and we are going to go after it.”

Coughlin is on the same page. “Once I decided that I wanted to continue skating, I was clear that I wanted to push towards the Olympics. In the big picture, I want to have a level of success at the Olympics that Americans haven’t had in a while. To do that, we can’t get caught up in external influences and we have to stay in the moment.”