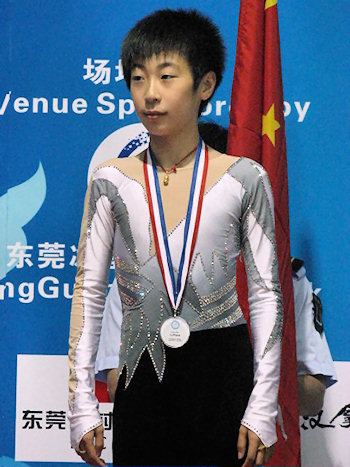 Boyang Jin of China won the 2011 Asian Figure Skating Trophy in the men's Junior division by a landslide.

The Asian Figure Skating Trophy is an International Skating Union (ISU) and Asian Skating Union sanctioned event for novice, junior, and senior skaters. It was organized by the Hong Kong Skating Union and took place in Dongguan near Guangzhou in China.

While the event may not normally feature big names, it is no less entertaining and where discoveries can be made: Such may be the case this year with 13-year-old Boyang Jin of China who won the Junior Men’s event by a landslide with 177.17 points. His score would have placed him second in the senior Men’s competition.

China has a real new little gem in Jin, whose name translates to “gold” in Chinese. Jin stands at just 1.50 meters (4 feet and 9 inches) and is delicately built. Jin flies over the ice, jumps high, and rotates fast. In addition, he feels his music and his repertoire already includes a nice triple Axel and triple-triple combinations. Watching him is truly enjoyable.

“I started skating when I was seven after watching a competition. I just liked skating,” Jin said and offered his quick smile as he gave one of the first interviews in his life. “What I like most about skating is jumping, and steps I like the least,” he revealed.

His coach, Caishu Fu, added that he landed his first triple Axel in May 2010. Since then, the jump has become quite consistent, and Jin hit two clean ones in Dongguan – one in the short and one in the free skating. He only stumbled on the second triple Axel in the long. Skating to a new arrangement of classical music, the skater also produced a triple Lutz-triple toe and three more clean triples. The jumps appear really big for someone so small.

“My favorite skater is (Alexei) Yagudin,” continued Jin, “because he jumped so well.” Obviously Jin was not even five years old when Yagudin won Olympic Gold in 2002, but his young admirer has been watching videos. “I also like (Evgeni) Plushenko,” he added. When asked which Chinese skaters he looks up to, he picked Xue Shen and Hongbo Zhao.

Jin is from Harbin in northern China, where he lives and trains under Fu and Zhaoxiao Xu. Both his parents were track and field athletes.

Jin has been coached by Fu and Xu since 2009. The teenager lives with his parents and his mother drives him every day to the ice rink which is 30 minutes away from their home.

“He trains four hours a day on ice and one and a half hours off ice,” said Fu.

Jin goes to school, but doesn’t have to attend all classes. There is also a tutor which comes to the ice rink to study with the young athletes.

“My favorite class is sports,” laughed Jin. He also studies English at school, but admits that it is not going so well so far. In his limited spare time, the boy likes to play with remote-controlled toy cars. “I like cars, German cars,” he said.

Jin is so tiny that he is wearing girls’ skates.

“His feet are small, and there are not black men’s boots in his size,” said Fu, who opened his skating bag to show the 22.5 Cm white boots. He usually uses black boot covers.

Fu said that Jin is a joy to work with.

“He is very smart, consistent, diligent, and hard working. He is listening to what we coaches are telling him,” she noted. “He is also a little shy.”

On the ice, he certainly didn’t appear shy. He is outgoing and makes eye contact with the spectators. In his exhibition program, he is skating to Michael Jackson’s Billie Jean, and obviously had a lot of fun dancing to this music. Fu chooses his music.

In Harbin, Jin trains on the same ice as China’s top junior skater Han Yan, who won the gold in the Senior men’s division at the 2011 Asian Figure Skating Trophy. Han now has a quad toe and a triple Axel as well.

Jin will turn 14 in October and thus is age-eligible for the Junior Grand Prix (JGP). He has yet to be assigned to a JGP event.

“Maybe there are not enough spots for all our skaters and we’ll go to the Junior Grand Prix next year,” commented Fu. “It depends on our Federation.”

Hopefully the Chinese Skating Association will find a spot for Jin on the Junior Grand Prix this year as he definitely belongs there.