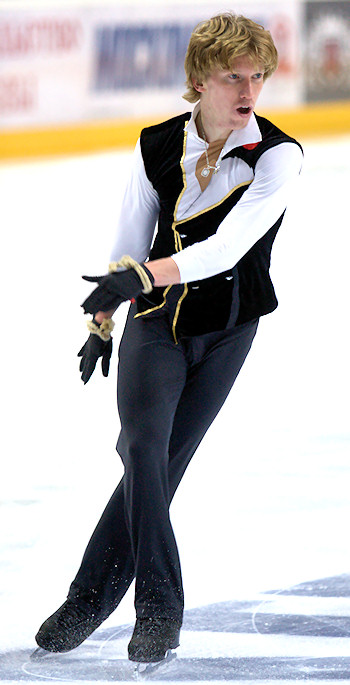 Russia’s Konstantin Menshov is an exception in a sport where mostly young athletes celebrate early success. He set an example of persistency and longevity when he won the 2011 Russian National Figure Skating Championships at the ripe age of 27. It was his ninth consecutive trip to Nationals and his first time on the national podium.

“Ninety-nine percent of the athletes with his kind of career would have lost heart,” said his coach of 12 years, Evgeni Rukavitsin.

And Menshov is still going strong. At the recent test skates in Moscow last week, the now 28-year-old landed his quad toes and looks to be ready for a new season.

The skater from St. Petersburg presented two new programs, both true to his original – if not quirky style that he has developed over the past years. The long program is a mix of fast music from Black Machine and Kill Bill with an unexpected part of Clair de Lune enhanced by bird’s twittering in the middle. There is a story behind it.

Menshov explains that ‘relief’ arrives during the Clair de Lune portion of his program.

His short program will be to music from the Men in Black II soundtrack in which the skater “enters into a house and meets a ghost”. The skater developed the programs together with his coach and choreographer.

The Russian Champion prepared with coach Evgeni Rukavitsin and choreographer Olga Glinka in training camps in Latvia and Sweden for the new season. Prior to that in June, he passed his final exams at the famous Lesgaft University for Physiculture and Sport in St. Petersburg to receive his diploma.

“Finally I’m done with university,” he said, smiling. “After that, my practices started again and one week later we went to Latvia in early July. We had hard practices there. We prepared and we paid a lot of attention to the footwork. We worked with the ice dancers, with (coaches) Oleg Volkov and Alexander Zhulin.”

“I am basically happy with my preparation as everything went according to plan,” the skater continued. “I used to take a long time to get into shape, but this year everything has been going well so far. The test skates are good, because they show you what you need to work on. The only thing is that you lose time because there is no time in between the test skates to train properly. You are preparing for the next performance, and psychologically you know that you need to rest in order to skate well here.”

Menshov has a simple explanation for his perseverance in the sport.

“The answer lies probably in the fact that I came to nationals many times and I never was on the podium, but I wanted to prove that I can do it and that I am worthy of the first place. So I came every year and finally I achieved it,” he explained.

Menshov’s sport psychologist describes him as “sensitive and warm-hearted,” while Rukavitsin says he is very hard working and “disciplinable”.

“Maybe this is where a little difficulty lies,” said Rukavitsin. He is often relying on people, on me as a coach, or on the choreographer, and I think this didn’t allow him to unfold for a long time. We are suggesting something and he says, ‘Yes, let’s do it’. Only later, when he was about 24 years old, he grew up and he started to suggest something of his own and he even started to decline some of our requests. We were even happy about that, because he obviously developed a personality and in the end this influenced his results a bit.”

“Now journalists and even parents of children that aren’t doing so well in the junior ranks, are coming to me and are telling me, ‘thank you very much for Kostia’,” said a proud Rukavitsin. “He cleared the path for these athletes that don’t believe in themselves anymore. He is a great example for our St. Petersburg figure skating school. He inspired many athletes that wanted to hang up their skates to pull themselves together and to work twice as hard.”

“At practice I give everything I have,” said Menshov. “If something is not working, I am get really upset or I can freak out,” he admitted. “Although my coach is saying that I am good-natured, too soft, and that I need to get more angry at myself.”

He easily admits that he loves jumping, but he improved his skating skills and spins with the arrival of the new judging system.

“It was hard to adapt,” Menshov said, laughing. “The new system raised the level of figure skating. We’ve worked a lot on skating skills and spins, because it is obvious that you can’t skate like before – like doing 15 cross overs and a jump.”

He also credits working with the ice dance coaches for his progress in this area.

“I see his strong points in the jumps, because in practice he is able to do three different quads: toeloop, Salchow and loop,” agreed coach Rukavitsin. “There is a weakness, and this is probably the neglect of his own ‘me’ – the growth of the personality as a junior and as a beginning senior. If we had the chance like the hockey players to compete until 35 and almost 40, he probably would compete until he is 40 and would become Olympic Champion. Unfortunately this is not possible and therefore his weakness lies in the slow development of his personality and of the consistency of his psychological preparation.”

“There is an improvement,” Rukavitsin continued. “It gets better with every year and he gets more consistent, but unfortunately there is not much time left. If this process of acquiring consistency would have started earlier, and if he had won Russian Nationals not at the age of 27 but at 22, then maybe he would be an accomplished athlete by now. But it is as it is, and I am still very happy for him. After all, he was able to achieve the title of a National champion and in my opinion, this is not bad.”

Menshov revealed that he doesn’t like getting up for early morning practices. When asked his favorite thing about figure skating, he chuckled and responded: “Well, I like most sitting in the Kiss & Cry after my skate and seeing that I am in first place.”

His girl-friend is not connected to figure skating, “thank God,” he added. Menshov is the only athlete in his family. He has a non-identical twin brother, Nikita, who is working in the airplane industry. “We are very different from each other. We have different characters and different interests,” he said.

The Russian will start his season with one of his favorite competitions – the Nebelhorn Trophy, in Oberstdorf, Germany at the end of this month. He won the silver medal at Nebelhorn Trophy last year. He also plans to go to the Coupe de Nice in France, and is currently slated to compete for the first time in two Grand Prix events this season (NHK Trophy and the Cup of Russia).

His goals for the season are clear and simple: “The goal is as usual – to skate clean programs. I don’t need anything else, I think. The most important thing is to skate clean, with emotions and confidence,” he commented.

There was no question for Menshov to continue his career after winning Nationals and placing seventh in his debut at the 2011 European Figure Skating Championships as he is still enjoying practicing and competing. “I said before, I am skating as long I as feel strong enough. If I feel I still have power, still can compete, still can do the difficult elements, then I will skate,” he pointed out.

“He is continuing, he is not giving up, and he believes,” agreed Rukavitsin. “And we are also believing in him. We will try to squeeze the most out of the situation. This guy can do it. He has put so much effort into it and we want to make the most out of it.”