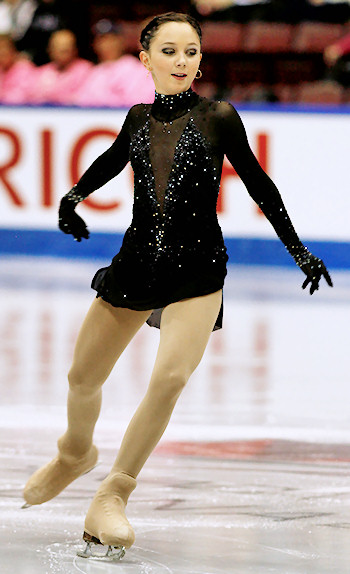 Tuktamysheva had a strong figure skating debut at the international senior level. The World Junior silver medallist pulled off a beautiful triple Lutz-triple toeloop combination that garnered a plus two Grade of Execution (GOE) from eight out of the nine judges. The 14-year-old went on to nail a triple loop and an easy looking double Axel with her hand over her head. Although she looks as young as she is, the skater interpreted her Tango routine well. Tuktamysheva earned a personal best score of 59.57 points.

“Competing in my first senior Grand Prix event, I didn’t know what to expect,” said the teenager. “I didn’t know what kind of scores the judges would give me. I just set the goal for myself to give a good performance and I did. So I am pleased with that.”

“I felt good on the ice,” Tuktamysheva added. “Obviously, there are always nerves – it doesn’t matter if it is a small or a big competition or even an exhibition. I was able to deal with my nervousness.”

Wagner has had some ups and downs in her career thus far, but looked fresh with new coach John Nicks in her short program to a playful piece named Pollock by Jeff Beal. The American produced a triple flip-double toe, a double Axel, and two level-four spins, but her triple Lutz got an edge call and negative GOE. The two-time World junior bronze medallist scored 54.50 points.

“I thought today was a pretty, solid performance. Obviously I would have preferred that the Lutz was not such a flutz,” admitted Wagner. “But I was very happy with the program. It was similar to my practices and I think it was a very good start to my Grand Prix season.”

Wagner also looked back to her previous Grand Prix experience.

“There are a lot of changes obviously,” she elaborated. “Physically you go through changes and you have to get adjusted to in your skating. Also, mentally and emotionally, you have to learn how to compete. The way I competed when I was 14 was completely different from the way I’m competing at the age of 20.”

“As long as you have a good support team I think it is an easy transition,” Wagner summed up. “But I feel now that I’m 20 and have been on the Grand Prix for so long, there is a little more at stake, like past competitions, placements, and expectations from myself. I came into my first Grand Prix season so excited and didn’t know what to expect. Then I skated very well in both of my competitions, so the next season I had expectations to do better. For me, that was the hardest one.”

“I wish her the best,” Wagner said, referring to Tuktamysheva during the press conference.

Flatt’s program to East of Eden included a triple flip-double toe, a triple Lutz, and double Axel as well as level-three footwork and two level-three spins. The student at Stanford University picked up 54.23 points.

“I’m very excited to have started out the season with such a strong short program, because I have not had the best short programs over the years,” the 18-year-old commented. “I’m looking forward to tomorrow.”

For Flatt, combining her studies in bioengineering at the elite university and high level-skating is a challenge.

“I’m exhausted all the time,” she said with a laugh, “but honestly I’m having a wonderful time which makes it so much easier to do what I’m doing. I love it.”

Akiko Suzuki of Japan went for a triple toe-triple toe but managed only a wobbly single loop instead of the second jump. Also, her triple Lutz received an edge call. She sits in fourth with 52.82 points after her new short program to a modern arrangement of the Hungarian Rhapsody.

“I regret the mistake on the combination, but I tried the triple toe-triple toe for the first time in the short program,” analyzed the 26-year-old. “I think this challenge made my skating more aggressive.”

USA’s Mirai Nagasu fell on the triple Lutz to come in fifth with 52.73 points. Canada’s Amelie Lacoste, who took the bronze medal last year in this event, also missed the Lutz that was downgraded. She is ranked sixth with 50.60 points.

Russia’s Alena Leonova, ranked fourth in the world and considered one of the top contenders here, struggled with her triple toe-triple toe combo and singled the Axel to finish in a disappointing seventh place (49.75 points).