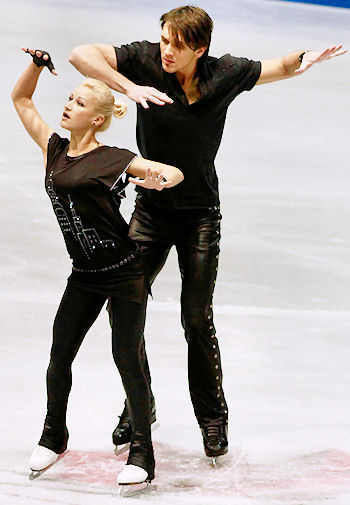 Russia's Tatiana Volosozhar and Maxim Trankov perform to Evanescence's "Bring Me Back To Life" for their Short Program.

Volosozhar and Trankov were very strong technically in their program to Вring Me Back To Life by Evanescence, reeling off a big triple twist, a throw triple flip and a triple toe. The World silver medalists also merited a level four for the other elements to achieve a personal best of 70.42 points. However, the program still looked a bit ragged and the music was distracting.

“We did a good short program today and we got a nice score for us,” said Volosozhar. “For sure we can skate better than how we did today, because we had some small mistakes. But we are very happy with our good score. It will be easier to skate our free program.

“We skated better than in other competitions this season, and this means we are on the right way,” Trankov added.

Trankov had a tough summer in figure skating after injuring his shoulder. As a result, the team was unable to work on lifts.

“I had an unfortunate fall,” he explained. “I hurt my shoulder and I lost one and a half months.”

Duhamel and Radford gave a passionate performance to Concierto de Aranjuez that included a triple twist, side by side triple Salchow and throw triple Lutz, as well as a level four spin, lift and footwork. Their triple twist earned a level three – a rarity in most pairs. The Canadians were very excited about their score of 62.37 points and this program.

“It’s our first time to do a clean short together as a team,” said Duhamel. “That was our goal this week. To get a level three on our triple twist was another goal and to get 27 points for components. So that was a really successful short for us. We lost some points on our spin and footwork, so there is room for us to grow for our next Grand Prix.”

Skating to Imagine by The Beatles, Takahashi and Tran produced a triple twist and earned a level four for four elements, however, the performance was marred by Takahashi stumbling on the throw triple Salchow and putting her hand down on the triple toe. Still, the reigning World Junior bronze medalists rightfully received a high component score for their elegant program that showed a lot attention to detail and underlined their musicality. The team scored 60.60 points and held off two-time two-time World Junior Champions Wenjing Sui and Cong Han from China.

“Оur Short Program wasn’t perfect, but the overall skating was great,” said Takahashi. “I am happy that we got over 60 (points) for the first time, but I think we have room to improve.”

“I was very happy about our death spiral,” added Tran, which earned a level four and positive Grades of Execution (GoE) from the judges.

Sui and Han moved into fourth at 59.23 points. Sui underrotated and two-footed the triple toe and also slightly touched down with her free leg on the throw triple flip.

“We had some errors today, but we were a little tired as we have done two Junior Grand Prix events already,” Han explained. “For the free skating we hope to perform up to our level and we are planning the quad twist.”

“We felt they should do both junior and senior Grand Prix to gain more experience,” coach Bo Luan explained.

Russia’s Lubov Iliushechkina and Nodari Maisuradze are standing in fifth place at 58.14 points. Iliushechkina’s triple toe was wobbly, but they hit a throw triple Lutz, a triple twist, and also earned a level four for the remaining elements in their entertaining Figaro routine.

“We made quite a few smaller errors and that wasn’t a pretty picture,” a self-critical Iliushechkina said.

“I had to change boots after the competition in Slovakia (end of September) and I’m still struggling with some elements such as the spin,” Maisuradze added.

Canadian Jessica Dubé and her new partner Sébastien Wolfe went for a side by side triple flip, but she stepped out of it and they did only a double twist. They placed sixth with 53.23 points.