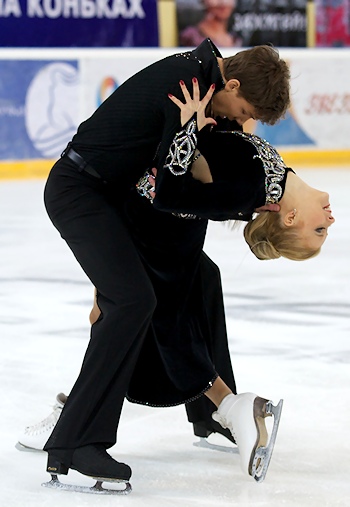 The 2012 Russian National Figure Skating Championships began today in Saransk, Mordovia with the Short Dance event. Despite being held the last weekend before New Year, the competition attracted a sizable and enthusiastic crowd to the city’s ice palace with a capacity of 5000. Those in attendance were well rewarded for deciding to forgo last-minute shopping and preparations in favor of watching figure skating.

It seemed that the skaters and their coaches drew the right conclusions from what is generally perceived to be a somewhat under whelming showing by the Russian ice dancers at the international events this fall, and all participants brought their best game to Saransk.

Bobrova and Soloviev were the last to skate and they capped the event with a powerful performance of their medley of samba and rhumba. The highlight of the dance were two pattern sections (the first – level four, the second – level three), which the skaters executed with excellent flow, character and unison.

The students of Svetlana Alexeeva worked with professional ballroom dancers during the summer and got comfortable enough with the intricate dance movements to own the choreography and deliver it convincingly. However, they had a couple of minor glitches: they narrowly avoided crashing into each other during the twizzle sequence and had somewhat labored changes of positions during the lift. Nonetheless, they currently lead the field by roughly three points with a score of
70.23 (34.00/36.23).

“We are very pleased with the performance,” said Soloviev. “Technically there was room for improvement, but emotionally it was our best performance to date.”

“We are very happy to come here. The audience in Saransk is great and very supportive,” added Bobrova. “We are very happy to entertain them so well on the eve of the New Year. It is very pleasant to see so many people coming to watch figure skating. Even though we had to wait very long to skate, it was a pleasure to perform here.”

When asked about a difficulty in gaining a level four for the patter dance, Soloviev explained that the main difference lies with the level of scrutiny.

“It is like the compulsories suddenly developed required elements,” he joked. “Before, we never worried about the details, but now we have to do. Say, the choctaw – exactly right and precisely that wide beyond any shadow of a doubt. It is very different and there are so many different criteria.”

“Previously, each sequence was judged more or less as ‘yes’ or ‘no’,” added Bobrova.

When asked about their own understanding of Latin dances, Soloviev said for them “Latin dances are all about the electrical connection between the partners.”

“It is a bit hard to explain,” he added. “It is a different manner of interaction between partners – not at all like the tango or waltz. But I guess we have not yet skated long enough to form a personal opinion on the matter.”

“It is very difficult to transfer Latin dances to the ice,” added his partner. “The things classical ballroom dancers do on the floor are simply amazing. I love it. They just enter the floor and you are immediately impressed. I do not think that we are quite there yet, but we are working on it.”

The defending national champions were asked about the gap between the Olympic Champions Tessa Virtue and Scott Moir from Canada, the US World Champion Meryl Davis and Charlie White, and the rest of the ice dancing field.

“I do not believe in insurmountable obstacles,” claimed Soloviev. “It is a matter of knowing your weak points and working diligently on them day in, day out.”

“The thing is these two teams set the bar very high,” said Bobrova. “Yes, they come up with fantastic programs each season and they skate them well, but once you start getting all those levels four and tens for components, there is not much left for you to do to improve the score. Whereas we, and I mean in general as all other ice dancers, we are gradually improving. So it is only natural that the gap is closing.”

“Personally, I feel that a ten in a component score should be reserved for perfect performances,” added her partner. “Not a hair out of place. For me, the ideal is a perfect blend of technique and artistry. You should not be able to see setups for elements, for example. It should all be joined together.”

The team’s highest program components score at the national championships was 9.50 for choreography from one of the judges.

Elena Ilinykh and Nikita Katsalapov seemed to have recaptured the feeling of connection between partners which distinguished their performances last season, however, it was notably absent at their two Grand Prix events in the fall. The playful opening “Hip-Hip Chin-Chin” samba section was especially strong, with a well executed and expressive circular step sequence. It was followed by a passionate rhumba, however, at the last change of tune Ilinykh unexpectedly slipped off the edge during a stop and fell. After a moment of hesitation, the team recovered quickly and had a strong finish to the loud applause of the audience. They scored 66.94 (33.26/34.66) points.

“We are also very pleased with our performance,” stated Ilinykh about their performance. “It was very easy for us to skate today. We are in excellent shape right now. All planned elements went well, and artistically we could not have skated this program better.”

“Yes, I made a mistake,” she added. “I slipped off the edge in the middle and fell, but it was merely an accident. Otherwise, the program felt great.”

The team obviously enjoyed performing their program, but felt that there is room to improve. They agree that the main challenge is adopting the ballroom style for the ice.

“We love Latin dances,” explained Ilinykh. “We worked with professional ballroom dancers and the things they do are just amazing. The way they move, the way they occupy the space and coordinate upper body movement with hip action. It is truly special. And it is a very hard work. We try to transfer those things on the ice, but it is an extremely challenging task. It is a completely different manner of movement. All those wide moves and difficult muscles are engaged, but we do keep working on it.”

“For us Latin dances are sexy and beautiful and we love skating them,” she added. “I think we have great music and a great program, and today we delivered it very well.”

On technical side, the students of Nikolai Morozov, who earned level threes for both sequence of rhumba, do not see much difference between it as a compulsory dance and as a pattern dance.

“I cannot say it is a challenging dance,” claims Katsalapov. “I believe it is still the same rhumba. It is still relatively easy compared to some other compulsories. We do not feel exhausted skating it. It is just the fact that they combined two dances into one and the result is twice as difficult as either of them separately.”

Riazanova and Tkachenko were able to fix some issues which led to low levels of difficulty at their Grand Prix events, however, they still only earned level two for one of the rhumba sequences and level three for the second one. The students of Alexei Gorshkov delivered a sensual and somber “Bonga” rhumba and upbeat Cuban salsa. They are currently third with 65.22 (31.86/33.36) points.

“We are also very pleased with the way we skated tonight,” said Tkachenko. “I guess there are very few skaters today who are not. We are happy that things went that well. We tried our best and we are satisfied.”

“There were a lot of spectators,” he continued. “I guess it is a major event for Saransk, and it will probably be even bigger in the future. Now that they have started to develop their own pair skating school. Figure skating will be “their” sport.”

The team said that the new short dance completely changed the focus of the compulsory/pattern dance.

“Previously, we had four sequences and the challenge has been to do them in precisely the same way,” explained Tkachenko. “Now we have only two, and even those two are set apart. Physically, it is easier, but technically it is on quite another level. And then you have to integrate it into the whole dance. Even a rhythm can be different.”

The skaters, whose less frantic and more somber dance was markedly different from those of other competitors, were quite frank about their interpretation of the meaning behind Latin dances.

“We have also worked with different specialists, ballroom dancers, and others,” stated Tkachenko. “The majority told us that it is not a dance about passion or love. It is simply an intercourse. This is the way it was explained to us and this is what we are trying to portrait. In a decent manner, of course.”

The dark horses of the event, the 2011 World Junior Champions Ksenia Monko and Kirill Khaliavin, are currently fifth with 58.27 points. The team had been forced to withdrew from the fall events due to Khaliavin illness. They delivered an interesting dance, however, their routine understandably lacked the polish displayed by other teams which already have several events under their belts.