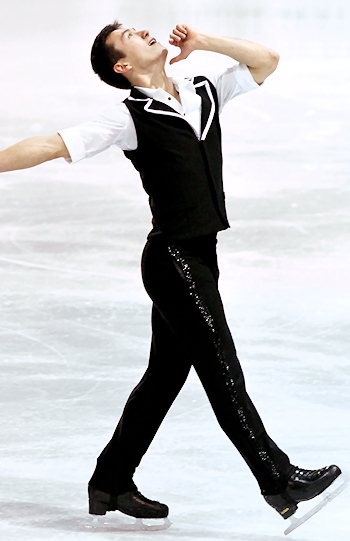 Canada’s Patrick Chan captured the Men’s short program, however, neither he nor his competitors delivered perfect performances. USA’s Jeremy Abbott and Spain’s Javier Fernandez are sitting in second and third, respectively.

Skating to Take Five, Chan nailed a great quad toe, but then added a triple toe for the combination although he was already very close to the boards. Not surprisingly, he crashed into the barrier and went down. The World champion then landed the triple Axel, but put his hand down, however, his triple Lutz, spins, and footwork were strong. Despite the mistakes, he picked up a season’s best of 82.68 points.

“Even on practices I thought those boards are coming in pretty fast,” Chan admitted. “In practice, I kind of did the quad by itself and didn’t add the triple toe to it, but today it felt so good and I just went for it. I kind of paid for it. I got right back up and into it, a bit shocked at first, but I got back into my rhythm. I was a little panicked but I kept it together.”

Chan admitted that the media frenzy about some misunderstood comments made in an interview three month ago was distracting.

“I guess I paid for it today,” said the 20-year-old. “All the bad karma is hitting me today, but it is just a distraction and part of the game. I love it, I thrive on it and kind of feed off it. It’s really a great result today considering the situation all week long. I was very happy with how I was able to stick to my guns.”

Abbott stepped out of his opening triple flip in a planned combination jump, but he rallied back with a triple Axel and a triple Lutz-triple toe. He scored 82.66 points for his characteristic program to Bei mir bist du schoen and Swing Kids.

The 26-year-old explained that he had to do a lot of thinking.

“The new system is all about points, so after I stepped out from the jump in the beginning, I kept thinking whether it would count as a jumping pass,” Abbott explained. “Throughout the program, I kept thinking whether to do the triple lutz-triple toe combination, or whether it would not count. In the end, I am glad I did, because I relaxed afterwards and concentrated on the performance. It added about five points to the score.”

Fernandez started strongly into his I love Paris” and Petit Fleur program with an excellent quad toe, but then he struggled with the triple Lutz combo. The Lutz had such a lean in the air that it was a wonder that the Spaniard not only stayed on his feet, but was even able to tack on a double toe to it. The triple Axel was good, as were his his spins and footwork, and he collected 81.26 points.

“I do not know how I managed to save that triple Lutz-double toe combination!” exclaimed the 20-year-old. “I think sometimes you just have to do it and you do it. I need to continue working on my triple flip and triple Lutz going into Nationals and Europeans as these are my worst jumps.”

Hanyu stumbled badly on the quad toe, but completed the rest of the elements.

“To come to the Grand Prix Final was one of my goals and also to succeed a quad toe loop here,” said Hanyu, who just had turned 17 on December 7. “On that element I had a stepping out, but it was good to challenge. During the six minute warm up my concentration was lost. That gives me room to improve.”

Takahashi went for a quad toe although his success rate in practice was very low. He underrotated and two-footed the jump and, even worse, failed to do a combination when stepping out of the triple Lutz.

“I feel really bad because I put the quad toe in and did not do it perfectly,” said the Olympic bronze medalist. “I was thinking of this throughout the rest of my program and lost my rhythm for the rest of the performance. I simply think this is the luck of the practice including the quad toe loop in the short program.”

Michal Brezina also risked a quad, the Salchow, and crashed. Additionally, he did a three-turn out of the triple flip before adding the triple toe for a combination. However, his triple Axel was strong. The Czech skater scored 75.26 points.

“The quad felt good in the warm up,” explained the 2011 Skate America gold medalist. “I did two in the warm up. Maybe I should just have done one and saved the other one for the skate. Looking at the competition, most guys do the quad in the short and in the free program, and I don’t want to stay behind. I want to stay in touch with the very top. It was important for me to go for the quad.”